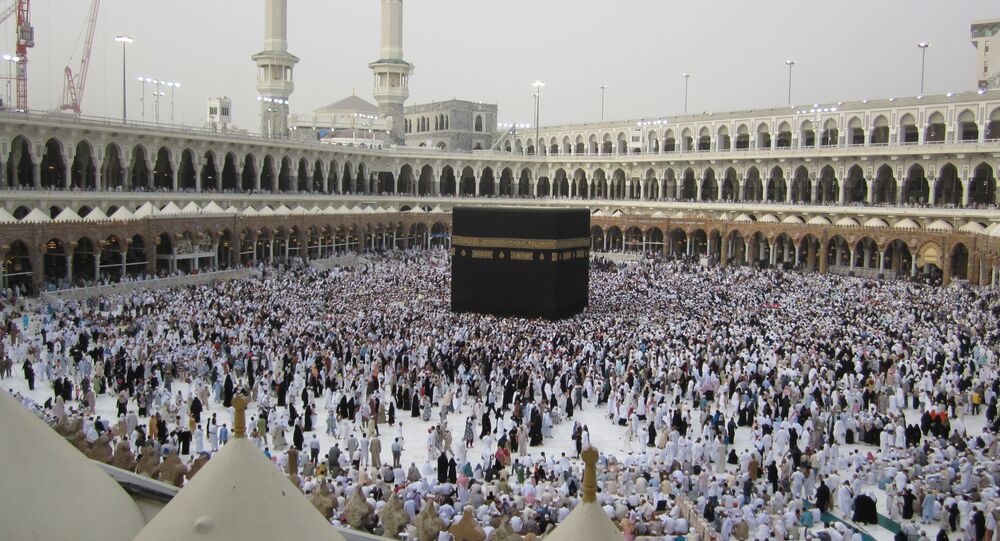 Video of a daily prayer service at the Saudi Arabian Masjid al-Ḥarām, the largest mosque in the world, reveals a top Saudi imam calling for the killing of Shia Muslims, Jews, and Christians. This as the West continues to send billions of dollars worth of military aid to Riyadh.

Masjid al-Ḥarām, also known as the Sacred Mosque, or the Great Mosque of Mecca, surrounds the holiest place in Islam, the Kabba, in the city of Mecca. It is the center toward which Muslims globally pray, and the primary destination for pilgrimages.

“O Allah, grant victory, dignity and empowerment to our brothers Mujahideen (Jihadists) in Yemen,” the imam sings in Arabic. “In Sham (Syria), and Iraq, and everywhere. O Lords of the Worlds grant them victory over the godless Rafidah (Shia Muslims).”

On August 15, at least 11 people were killed and 19 injured in a Saudi-led airstrike that destroyed a Doctors Without Borders hospital. The week prior there were attacks on a food processing plant and a school.

In 2015 the Saudi government received permission to buy hundreds of air-defense missiles for $5.4 billion in September, four military ships for $11.25 billion in October, and 22,000 smart and general-purpose bombs for $1.29 billion in November, according to Reuters.

Earlier this month, the Obama Administration proposed the sale of another $1.15 billion in tanks, machine guns and other US military equipment to Saudi Arabia, leaving many lawmakers asking who the regime would kill with the weaponry.

© Flickr / Andrew Parsons/ i-Images
Thousands of Dead Yemeni Civilians Not Enough to Halt Arms Sale to Saudis for Boris Johnson
"Saudi Arabia is an unreliable ally with a poor human rights record," Senator Rand Paul (R-KY), told Reuters. "We should not rush to sell them advanced arms and promote an arms race in the Middle East. I will work with a bipartisan coalition to explore forcing a vote on blocking this sale."

"I believe the Saudi military's operational conduct in Yemen and the killing of civilians with US-made weapons have harmed our national security interests, and I will continue to oppose any arms sale that contributes to its operations in that arena," Lieu stated.

Massachusetts Representative Jim McGovern (D-MA) called the arms deal “the last thing the US should do.”

"Saudi Arabia's dangerous and reckless use of cluster munitions and other weapons has already harmed and killed countless innocent civilians. The last thing the United States should do is sell them more than a billion dollars' worth of additional arms and military equipment," he says.

"As a world leader, America has a solemn responsibility to stand up for human rights and help protect the lives of innocent civilians," McGovern stated. "This arms sale sends the wrong signal to Saudi Arabia and undercuts the strong concerns expressed by the US, the United Nations and other countries about the Saudis' failure to take the necessary steps to avoid civilian casualties."

Congress will have a 30-day window to block the sale after reconvening from a summer break next month.