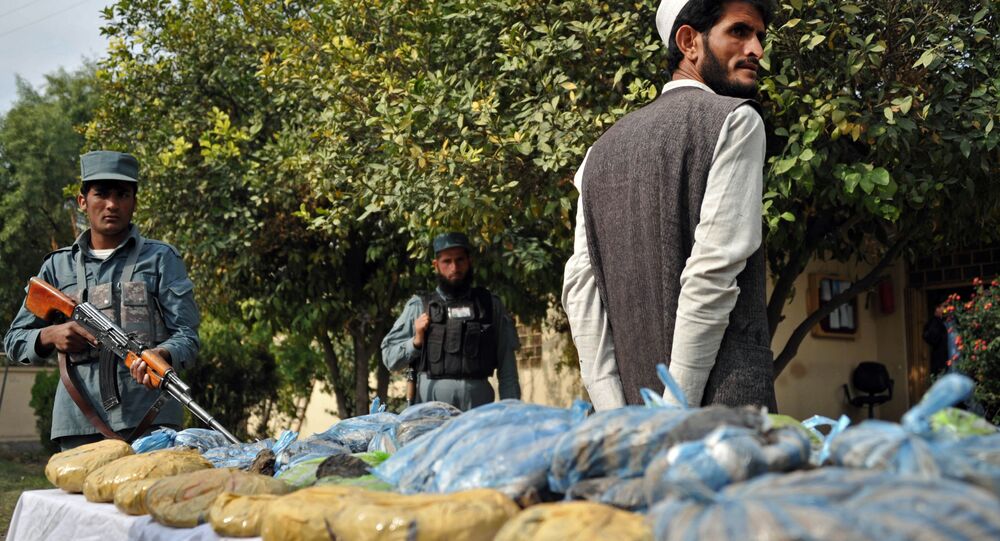 Afghanistan's opium poppy production equals more than 90% of heroin worldwide and since the joint US-UK and NATO invasion, it is as much as 40 times higher than it has ever been, recent reports have revealed.

The Taliban have been spreading a significant wave of attacks nationwide against the US-backed Afghan forces in recent months. It is said that part of their strategy is an attempt to takeover Lashkar Gah, the capital of the southern opium-rich province of Helmand.

Only this week, Afghanistan's President Ashraf Ghani condemned some of the recent wave of attacks.

"The enemies of Afghanistan have lost their ability to fight the security and defense forces of the country and this is why they are attacking highways, cities, mosques, schools and amongst common people of our country," he told reporters.

But when targeting opium-rich locations, the prime goal has been to control the illegal production and supply trades, a key means of economic reliance for both the farmers who rely on crops for their own livelihoods and the Taliban's source of significant revenue.

Following on from what is said to have been one of the biggest harvests of opium during this summer, according to the most recent UN Office of Drugs and Crime (UNODC) report, the impact of illegal production and supply eventually spreads all the way to the streets of cities around the world, including the UK and wider Europe, where heroin dependency is also at its highest levels.

Previous international efforts to combat opium cultivation have included introducing alternative crops for farmers to continue having a source of livelihood and also — in some areas — the introduction of paying them not to plant poppies.

But none of this has helped when farmers elsewhere started growing poppies in the hope of getting money if they stopped, further escalating the issue of opium production being seen as the only means of an acceptable income.

So what can be learnt from some of the other countries around the world with a significant narcotics production issue?

Turkey is one such country that is said to have successfully transitioned from illicit production to legal, regulated control of the market, in particularly in the area of medicinal usage.

This may be more challenging to replicate in more unstable countries such as Afghanistan with weaker infrastructures in comparison.

Quite possibly the deemed success in countries such as Turkey, may have had the counter-effect of causing supply and demand to increase in other countries such as Mexico, Guatemala, India and even in Afghanistan, and so the impact has certainly not helped the global epidemic in any way.

Therefore, in order to have an impact on the illicit trade, Turkey's model towards legal regulation must be the key long-term aim for many others.

Most opium comes from Asia — like Afghanistan for instance, where we have a ton of soldiers… 🤔 https://t.co/sEjGJM3mTo

Like with any business opportunity, where the demand for something that is unregulated continues to be rising worldwide, there will always be criminal attention on supplying to that unregulated demand.

Increased treatment usage by health providers of opiate substitutes and medicinal use of heroin could be a way for the countries at the end of the supply chain to lower the demand side a little. Governments addressing the key social and economic factors that cause any substance dependence issues to escalate is also a key area of focus.

There is certainly no quick fix in combating the global drug epidemic. One thing that can be learnt from the intervention of international communities in Afghanistan in particular, is that forceful invasion just does not work but a move towards some level of ethical regulation could be a step in the right direction.

US War on Afghan Poppies: Many Deaths, Little Success