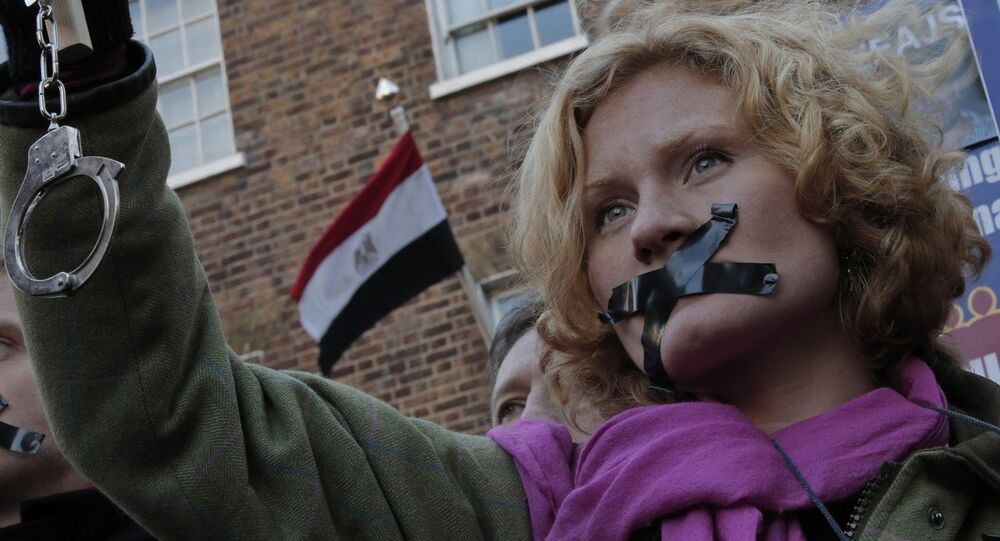 The Egyptian Commission for Rights and Freedoms, a civil liberties watchdog, has created an application in a bid to protect Egypt's activists and journalists from state abuse.

© REUTERS / Amr Abdallah Dalsh
Egypt Court Acquits 33 Red Sea Island Protesters
MOSCOW (Sputnik) — The Egyptian Commission for Rights and Freedoms (ECRF) has created an application in a bid to protect Egypt's activists and journalists from state abuse such as enforced disappearances, an instrument the government allegedly uses to oppress the political opposition, media reported on Tuesday.

The app, dubbed "I Protect," allows Android phone users to input a code when police detain them, which sends an SOS message to up to three friends and an email with the location of the detention to the ECRF, The Guardian reported.

"Being able to speak out about the arrest of an activist or protestor in the first hours contributes to the person’s transfer from police to prosecution during the legal time from of 24 hours…This prevents their detention incommunicado, or worse their forced disappearance, and therefore reduces the risks of being subjected to torture or other ill treatment," Mohammed Lotfy, the executive director of ECRF, was quoted as saying by the newspaper.

As many as 1,250 people forcibly disappeared in the first eight months of 2015, according to an ECRF report. In July, Amnesty International published a report, which also showed that Egypt’s National Security Agency (NSA) was allegedly involved in abductions, torture and forcible disappearances of people in order to intimidate and wipe out government opponents.

The concept of enforced disappearances gained attention amid Argentina's "dirty war" during the 1970's, when left-wing opponents to the country's military government would commonly vanish.

Egypt has been struggling with political turmoil since the ouster of its first elected President, Mohamed Morsi, following a series of mass anti-government protests.

Journalist ‘Worried’ Next President May Order Assassination of WikiLeaks Founder