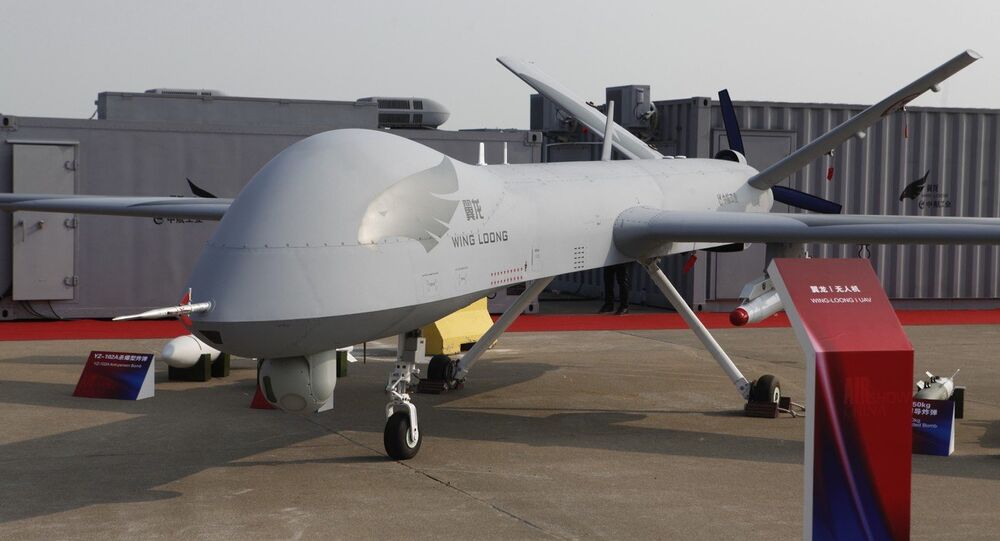 China is strengthening military ties with Saudi Arabia, a key US ally in the Middle East. In Beijing, an agreement has been signed to sell a batch of unmanned aerial vehicles (UAVs) Wing Loong (Pterodactyl) to Saudi Arabia. Analyst Viktor Baranets told Sputnik why this relation is mutually beneficial.

© AFP 2020 / Jim Watson
The Hypocrisy of the West's Alliance With Saudi Arabia
The agreement to sell the UAVs was signed within the framework of the visit of the Deputy Crown Prince of Saudi Arabia, the second Deputy Prime Minister and Defense Minister Muhammad Bin Salman.

The Saudi kingdom became the first Arab country to purchase this type of UAV, which were developed by Chengdu Aircraft Industry Group, newspaper Global Times reported.

Arab newspaper Al-Watan, for its part pointed out that this type of drone can carry two air-ground missiles and is an effective tool for reconnaissance missions and information monitoring.

The Wing Loong UAV is also capable of using modern methods of firing, in particular, to carry missiles and laser-guided bombs.

The news portal also suggested that it is possible that the Saudis have already tested the combat capabilities of the Chinese drones. The publication recalled that back in 2014; Taiwanese sources reported that Riyadh had ordered Wing Loong MALE UAVs from Beijing. The deal was not officially reported but it is possible that Saudi Arabia already has the experience of using them in live combat.

In recent years, contact between armies of the two countries has reached its highest level; there is friendly cooperation in the field of technological equipment and staff training as well. This was stated by a member of the Chinese State Council, Defense Minister Chang Wanquan, during a meeting with his Saudi counterpart Muhammad Bin Salman.

He pledged China's readiness to contribute to military ties between the two countries and to take it to a new level. Muhammad Bin Salman, in his turn, also expressed hope for intensification of strategic cooperation with China in the military sphere.

Saudi Arabia has become one of the main platforms through which China intends to strengthen its military and political influence in the Middle East, military analyst Viktor Baranets told Sputnik.

© REUTERS / Rolex Dela Pena/Pool
Is China Preparing for Military Involvement in Syrian Crisis?
He said that China's and Saudi Arabia’s military-technical ties could have some serious ability to influence global geopolitics. The analyst said that this could be a matter of concern for the US.

“It does not welcome the strengthening of relations of Saudi Arabia with its geopolitical opponents. China is beginning to increasingly penetrate the territory of American influence. Saudi Arabia is one of them. Another example is Djibouti, where Chinese military are establishing themselves near the US military base,” Baranets said.

He further said that China’s decision to make a base in Djibouti was unexpected for many. According to the analyst China is beginning to loudly declare its interests. This is a rather serious moment in Chinese geopolitics, which cannot be ignored.

Chinese Professor at the Diplomatic Academy Su Hao said that the partnership between China and Saudi Arabia could reap many mutually benefits.

The analyst further said that Saudi Arabia has very close ties with the US, especially in the military and security spheres. With China there is commercial contact and economic cooperation but the military sphere and security is relatively fragile.

According to the analyst, relations of Saudi Arabia with other countries also requires diversification. Currently, against the background of falling world oil prices, which affects the economy of Saudi Arabia, the kingdom hopes to achieve a number of economic benefits through the development of military and counter-terrorism cooperation with China.