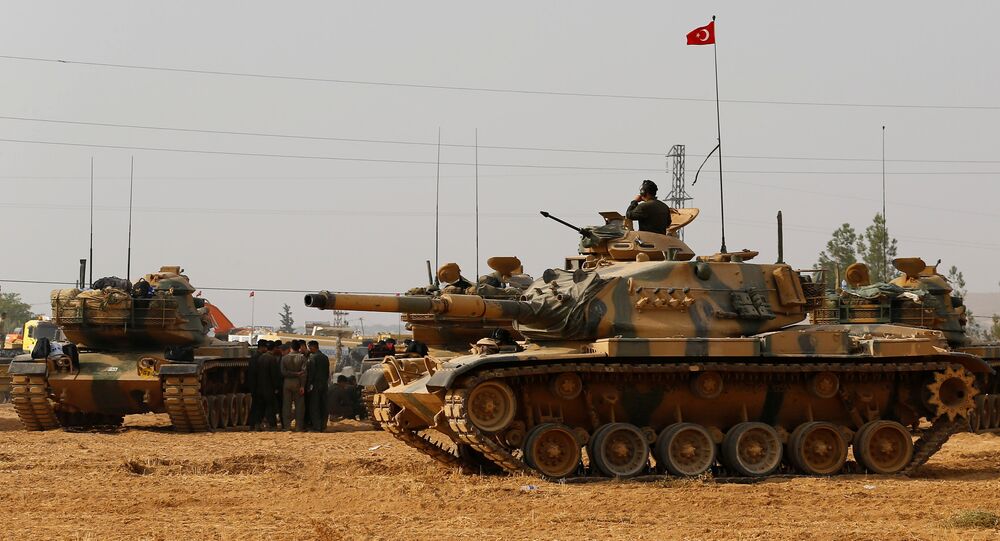 Turkish authorities have long been rumored to be planning to put boots on the ground in Syria; last week Ankara finally launched its large-scale military offensive to remove Daesh from the city of Jarablus, prevent Kurdish forces from moving further west and take the border region under control.

© REUTERS / Revolutionary Forces of Syria Media Office
Turkey 'Likely to Confront Syrian Forces' if Jarablus Operation Extended
Experts agree that the Kurds, whom Turkish President Recep Tayyip Erdogan and his supporters view as an adversary, are the primary reason behind the campaign, formally known as Euphrates Shield. The name itself appears to highlight Ankara's true motives.

Turkish authorities have long said that Euphrates River was a red line that the Kurds could not cross. Should Kurdish militias choose to cross the river and advance further west, Ankara would send troops across the border, they warned. This is exactly what happened.

In early August, the Syrian Democratic Forces (SDF), made up largely of the Kurds, liberated Manbij, a city located to the west of the Euphrates. They also said that they planned to move further west to liberate the town of al-Bab. On August 24, Turkey launched its military offensive.

In an opinion piece for the National Interest, Bülent Aras, professor of international relations at Istanbul-based Sabanci University, maintained that Ankara was waiting for "an opportune moment to wage a multifunctional operation" to tackle the twin threats, including Kurdish battlefield success in northern Syria and increasing terrorist attacks from Daesh.

In addition, Turkey also wanted to "ensure its border security and empower its position in the Syrian crisis," he added.

Turkey's goals with regard to the Syrian crisis have dramatically changed over the course of the last five years.

Ankara "currently prioritizes restoring highly fragile domestic security and aspire to an active role at the negotiation table for any post-conflict resettlement in Syria, rather than its initial aspirations to remove Assad and prevail in its geostrategic rivalry with Iran and Russia," Aras observed.

"Even though Ankara has not clarified its motives for entering Syria, it is no secret that the main source of concern for Turkey is the rising influence of the US-backed Kurdish Democratic Union Party (PYD)," he wrote for the Jerusalem Post. "Beyond that, Turkey seeks to strengthen its own influence in this part of Syria."

© Sputnik / Alexei Nikolskiy
'Flexible Approach': Putin 'Ready to Talk to Everyone' in Middle East
Shahbazov also mentioned that Turkey wants to destroy Daesh in northern Syria to make sure that the radical group that has wreaked havoc in the Middle East and beyond "is no longer able to pose a real threat to its national security."

However, the Turkish military does not seem to be focusing on Daesh which is still present in the regions surrounding Jarablus.

"To clarify the situation on the ground a bit: While Turkey is pressing on SDF targets, [Daesh] continues to control scores of villages from Jarablus to al-Rai in the west," Turkish journalist Fehim Taştekin wrote for al-Monitor, adding that the brutal group "also controls the area from Turkey's borders to al-Bab in the south."