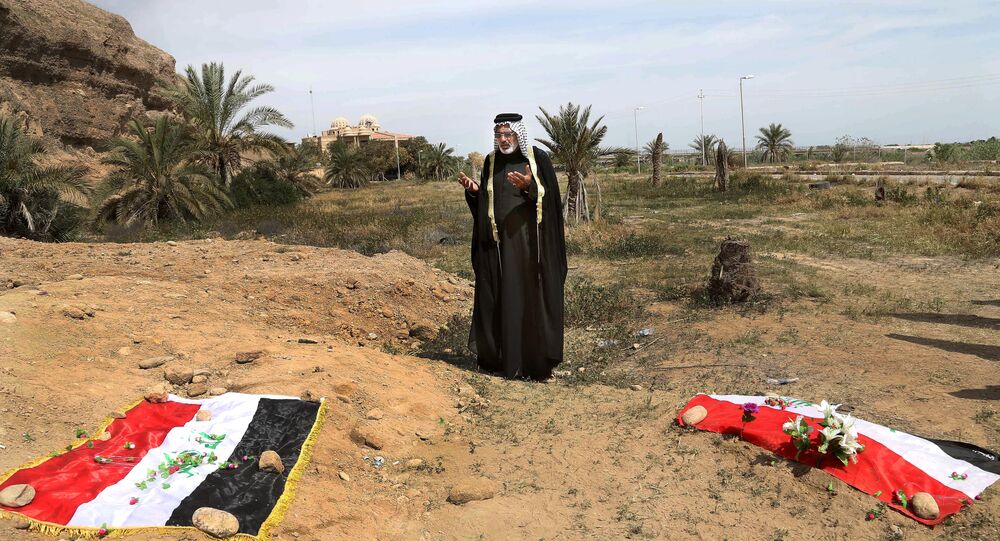 ‘They Don't Even Try to Hide it’: 1000s Killed by Daesh Buried in Mass Graves

A recent geographical survey has mapped and documented up to 72 mass graves in Syria and Iraq filled with thousands of victims of Daesh violence. This number only includes those areas accessible to surveyors, as others are too dangerous to explore, making the number of victims difficult to gauge.

Most estimates put the number of known victims between 5,200 and 15,000, with some calculations based on Daesh propaganda and others on the testimonies of survivors. Some of the graves are scattered throughout Sinjar Mountain in Northern Iraq, after the group recaptured the territory in August 2014 from the Yazidi ethnic group.

Every day Rasho Qassim drives past a grave containing the remains of his two sons. The territory has since been retaken from the violent extremists, but a lack of funding or government action has left the site roped off and unexcavated. "We want to take them out of here. There are only bones left. But they said 'No, they have to stay there, a committee will come and exhume them later,'" he said, according to the Associated Press. "It has been two years but nobody has come."

Sinjar Mountain’s northern flank also contains five grave sites containing the bodies of young men from the Hardan village who were killed in Daesh attacks in 2014.

Arkan Qassem, 32, is from Gurmiz, a village near Hardan. He and other villagers fled to the mountains when jihadists descended on the area. Some of the men attempted to mount a defense, but instead watched groups of women, children and men being killed by the militants.

He said, "I have lots of people I know there. Mostly friends and neighbors, It's very difficult to look at them every day."

Daesh bragged about the killings, but proving that they were an act of genocide, which the United Nations seeks to do, will be difficult. Naomi Kikoler, director of policy & advocacy with the Global Centre for the Responsibility to Protect at the Holocaust Museum in Washington DC, said, "We see clear evidence of the intent to destroy the Yazidi people," and observed that, "There's been virtually no effort to systematically document the crimes perpetrated, to preserve the evidence, and to ensure that mass graves are identified and protected."

Satellite images indicate that mass killings by Daesh likely extend beyond Yazidi territory. Evidence including tire tracks and scraped land indicate a possible burial site of 600 male inmates in a June 2014 massacre at the Badoush Prison in Iraq.

A grave has been revealed at almost every major location in which Daesh formerly had control, including one found in Ramadi near a sports stadium. Sirwan Jalal, the director of Iraqi Kurdistan's agency in charge of mass graves said, "They don't even try to hide their crimes," and, in describing the brutal killings, said, "They are beheading them, shooting them, running them over in cars, all kinds of killing techniques, and they don't even try to hide it."