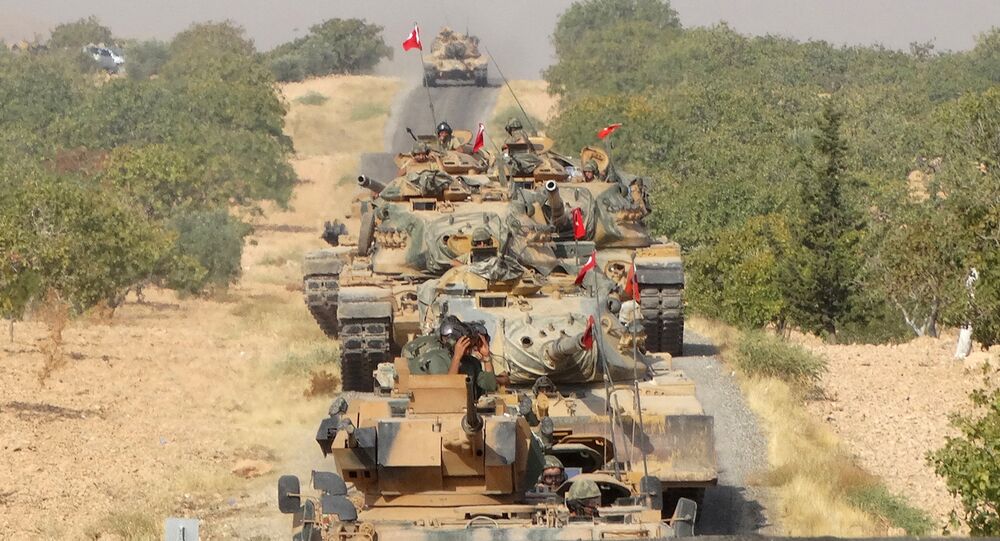 Too Many Fronts: Ankara Should Send Olive Branch to Kurds, Boost Russian Ties

It seems that Turkey is attempting to fight a war on several fronts; this was never the plan, expert Stanislav Tarasov wrote for the Russian news agency Regnum.

© REUTERS / Ihlas News Agency
Turkey Chose 'Opportune Time' to Launch Ground Operation in Syria
Right now, Turkey must wage wars on a whole array of fronts, something that seems to have caught Ankara unawares, according to expert Stanislav Tarasov.

In his article, which was published by the Russian news agency Regnum, Tarasov wrote that Ankara, first and foremost, is fighting the Kurdistan Workers' Party (PKK), which in turn is struggling for the status of Kurds on Syrian territory.

Always seen as a force supporting Syrian Kurds, the PKK recently started to form a parallel system of government in Turkey's southeast, according to Tarasov.

The second front is related to Turkey's current fight against Daesh, he said, quoting Turkish experts as saying that "until recently, Ankara did not wage a full-fledged war against this terrorist group because Ankara instead fought both the government forces and activists of the Kurdish Democratic Union."

Now Ankara is combating Daesh terrorists who have already entered a military confrontation with Turkish troops and who employ terror tactics on Turkish soil.

However, Ankara has yet to clearly define its stance on Damascus, recently leading to a confrontation, Tarasov recalled.

© AFP 2021 / BULENT KILIC
'Or We'll Force Them Out': Kurdish PYD Demands Turkey's Withdrawal From Syria
He said that on top of all that, President Recep Tayyip Erdogan is fighting the so-called "parallel state" inside Turkey which is associated with the name of Islamic cleric Fethullah Gulen, who is accused of being behind the July 15 coup attempt in Turkey. Last but not least is the influx of refugees in Turkey, which can certainly be perceived as another harsh consequence of the Syrian war, according to Tarasov.

He said that breaking this multi-front deadlock will only be possible if Ankara enters peace negotiations with the PKK, reaches a consensus with Damascus and gets US support – something that will finally enable Turkey to focus on its arch-foe, Daesh.

In this vein, further bolstering relations with Russia and Iran will be of paramount importance to Turkey's international clout, Tarasov said, adding that it is Ankara, not Damascus, that currently remains "in the center of a large Syrian game."

The Turkish military began its so-called Euphrates Shield operation in Syria on Wednesday, sending in dozens of tanks and hundreds of troops.

The operation is officially aimed at pushing Daesh terrorists out of Jarablus and preventing Kurdish forces from extending their territory in northern Syria. Many international experts, however, noted that the Turkish operation in Jarablus is aimed first of all against Kurds, and only then — against Islamist radicals.

Kurdish Syrian Democratic Forces troops were greeted with enthusiasm two weeks ago when Daesh-held Manbij was finally liberated: the city is strategically located between Syrian territory held by the terrorist organization and the Turkish border.

It must be remembered that Turkey had issued an angry warning to Kurdish troops late last year not to attempt to enter Daesh territory west of the Euphrates River. Despite the incriminating undertones of this demand, the Turkish government's actions could be explained by an attempt to prevent Kurdish forces from gaining complete control of the part of Syria located directly south of Turkey.

© REUTERS / Charles Mostoller
Turkey's Gripe With Cleric Gulen Doesn't 'Warrant Extradition' Without 'Direct Evidence'
Meanwhile, one Turkish soldier has reportedly been killed and three others were injured by a rocket launched from territory held by Kurdish YPG forces, after Turkey launched a cross-border offensive earlier this week.

The situation in Syria was discussed by Russian President Vladimir Putin and his Turkish counterpart Recep Tayyip Erdogan during a telephone conversation on Friday.

The Turkish President informed Putin about the ongoing Turkish military operation in northern Syria and stressed the importance of a joint fight against Daesh and other terrorist groups.