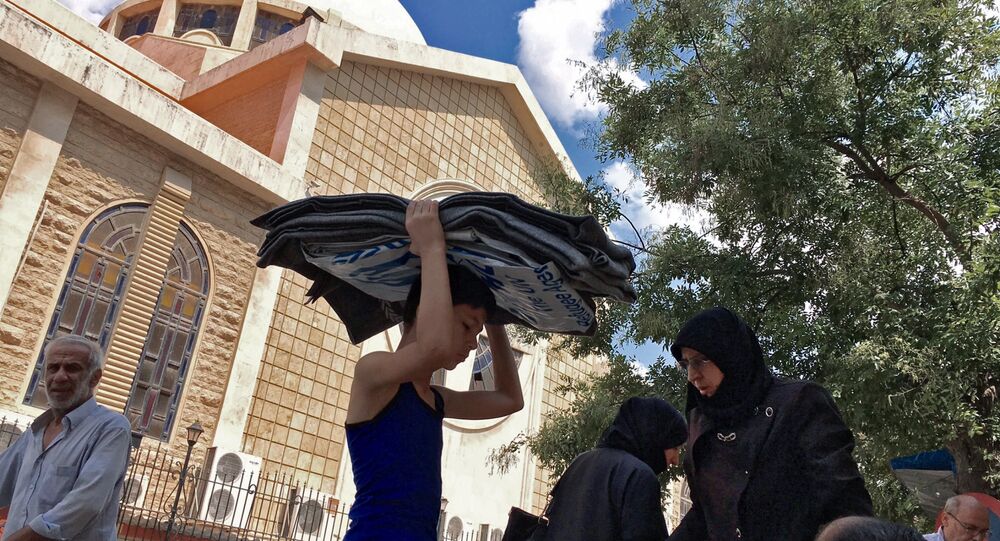 The attempts by some Western media to accuse Russia of bombing the homes of civilians in Syria have failed every time because of the lack of actual evidence and the absurdity of the fabricated reports.

Sputnik went to a center in the refugee camp in the city of Latakia, which is engaged in the dissemination of domestic IDPs to different camps. In the center, residents of Idlib, Aleppo and Raqqa all await to be settled.

One of the refugees named Abu Ahmed, who fled from the city of Erich in Idlib, told Sputnik that his house was destroyed by the terrorists two years ago. These were the same terrorists who killed Russian pilots who were carrying humanitarian aid on board the Mi-8 helicopter.

“We do not accept the criminal actions of the armed groups that committed crimes against the pilots who were on a humanitarian mission,” Ahmed told Sputnik.

© Sputnik / Michael Alaeddin
Free Syrian Army Set to Seize Strategic City in Aleppo From Daesh
“These pilots delivered food to the residents in besieged areas and the terrorists shot down the helicopter and humiliated the bodies of these pilots. Let me ask you a question: which century to do you live in,” Abu Ahmed said.

Another displaced resident, Um Maysaa, who fled the city of al-Bab in Aleppo province, said that she prays for any pilot whose plane flies over her head, be it Russian or Syrian.

“All those who are helping us from any army, whether it’s Russian or any other, are like our children! But most importantly it is Russia which has done a good deed. They brought us flour, baked goods and even sweets. All of this was brought to us by the Russians. They have really helped us greatly,” Um Maysaa told Sputnik.

In turn, a young resident of Idlib named Ali sadly recalls how he lost an opportunity to play freely in his courtyard with his friends. He dreams of the day when his native lands are freed of Daesh by the Syrian Army.

“We are waiting until the army liberates our city with the support of Russian aircraft. We want to go back home and to school. We want to play with friends in the backyard!” Ali told Sputnik.

UN Ready to Deliver Aid to Aleppo at Any Time, Needs Adherence to 2-Day Truce