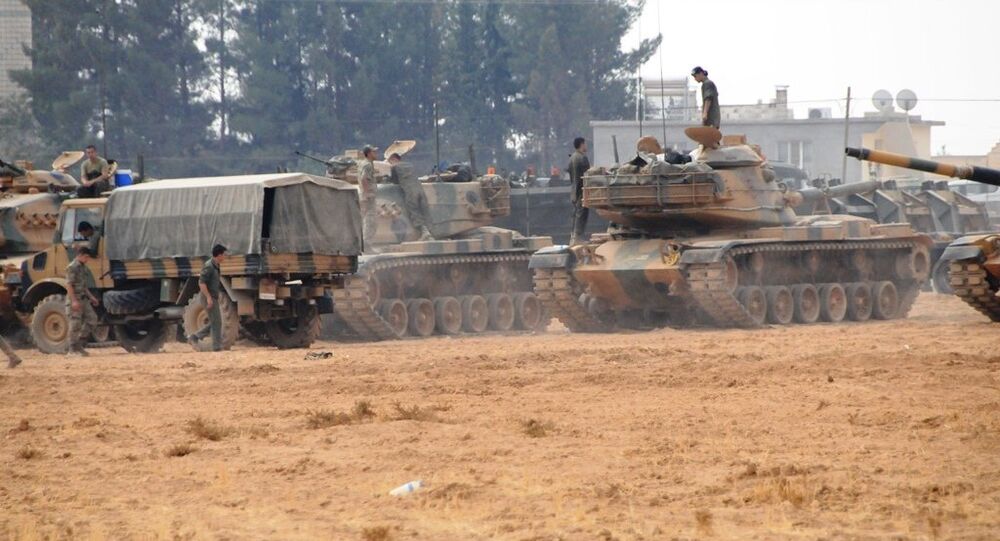 On August 24, Turkish forces backed by American airplanes launched on operation in the northern Syrian city of Jarablus. The offensive was dubbed "Euphrates Shield" and was backed by a US-led coalition.

President Recep Tayyip Erdogan announced that the operation was aimed against Daesh militants and Kurdish forces. The operation came after a terrorist attack in Gaziantep last weekend which killed over 50 people. The Turkish government blamed Daesh for the attack.

The Turkish operation was backed by an international coalition led by the United States.

© REUTERS / Stringer
US Supports Turkish Military in Jarablus - Vice President Biden
Early in the morning, Turkish tanks, aircraft and special forces backed by coalition aircraft launched a coordinated attack in Syria to push back Daesh militants from the Turkish border and prevent Kurdish control of the area from expanding. Later on the day, President Erdogan announced that Turkish forces had taken control over Jarablus.

The capture of Jarablus will prevent Kurds from uniting the areas they control, said Alexander Vasiliev, a research worker at the Institute for Eastern Studies, the Russian Academy of Sciences.

Syrian Kurds control an area in northern Hasakah and Raqqa provinces. In Aleppo, they control small areas in northwest and northeast.

"This is the main goal of the operation – to close the Western bank of the Euphrates for Kurdish forces and prevent them from uniting the two territories," Semen Bagdasarov, director of the Center for Middle Eastern and Central Asian Studies, told RBK.

Washington decided to support Turkey’s offensive against the Kurds despite the fact that previously Kurdish forces cooperated with the US military during the liberation of Manbij.

© Sputnik / Hikmet Durgun
Turkish Troops to Stay in N Syria Until Free Syrian Army Regains Control of Jarablus
"The Americans are still pursuing their main goal, to weaken the government of Bashar Assad. All coalitions the US supports are temporary," Sergei Balmasov, an expert at the Institute for Middle Eastern Studies, told Svobodnaya Pressa.

He added that if Turkey drags further into the Syrian war it would only destabilize situation in the region.

Washington has a clear tactical objective – to make some military advances in Syria and Iraq before the presidential election in November, military expert Anatoly Nesmiyan pointed out.

"The US is now building various, sometimes unexpected coalitions, in an attempt to gather as many forces as possible to advance on Raqqa. Meanwhile, Kurds are not ready to die for Raqqa because it’s not their land. I think that the US would support Ankara to have the possibility to bargain with Kurds in the future," he suggested.

The operation came amid US Vice President Joe Biden’s visit to Turkey. Ruslan Pukhov, head of the Center for Analysis of Strategies and Technologies, said the coincidence was symbolic.

"Taking into account the fact that ties between Ankara and Washington have reached the bottom over the past two weeks, this operation is a way to draw attention from exiled cleric Fethullah Gulen and show that the US and Turkey remain strategic allies," Pukhov told the Russian daily newspaper Kommersant.