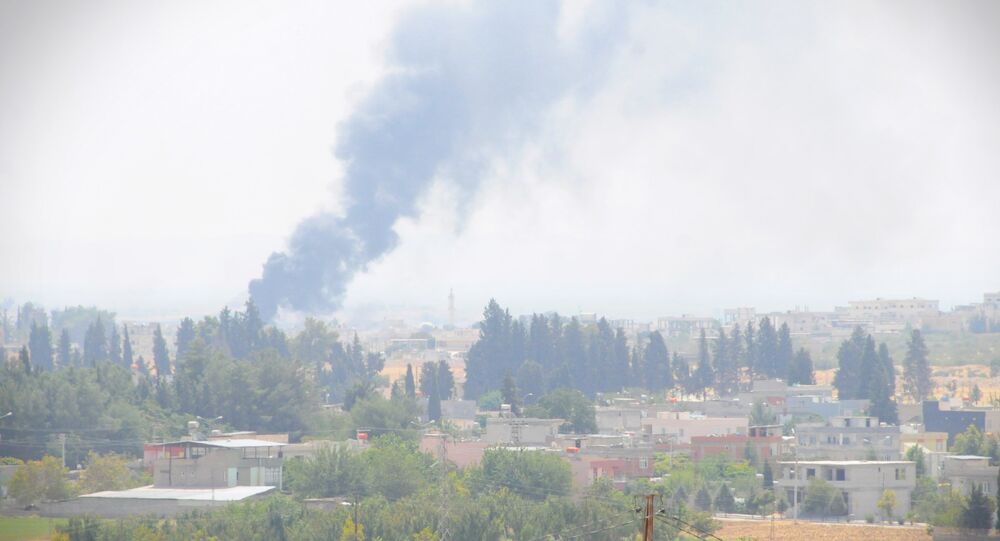 "Our main goal is to clear Jarablus of the Daesh terrorist group militants. The second goal is to prevent Syrian Kurds from taking control of the area after Daesh clear-out. Jarablus is an important point in both a short and long-term perspective. We have to defend our borders by ourselves as Syria does not have an effective government. And we are within our right to stay in the area until the Free Syrian Army regains control over the situation there," Isik was quoted as saying by the NTV broadcaster.

© Sputnik / Michael Alaeddin
Turkey Plans to Use Aleppo as 'Trump Card' in Future Political Talks
Turkish President Recep Tayyip Erdogan said on Wednesday that the operation in Jarablus was aimed at neutralizing the threats posed by Daesh, outlawed in Russia, as well as Kurdish militants in Syria, which Ankara considers to be linked to the Kurdistan Workers’ Party (PKK), which is classified as a terrorists organization in Turkey.

Syrian Kurds and Damascus accused Ankara of violating the territorial integrity of the Arab republic.

Turkey expects Syrian Kurds to leave the western bank of the Euphrates within the next week, Isik added.

“The Syrian Kurds will inevitably retreat to the East. We agreed with the United States a week ago that the Kurds would retreat to the eastern bank of the Euphrates in two weeks. This exodus is expected to end next week. The exodus is not completed, we are waiting for that and monitoring that.”