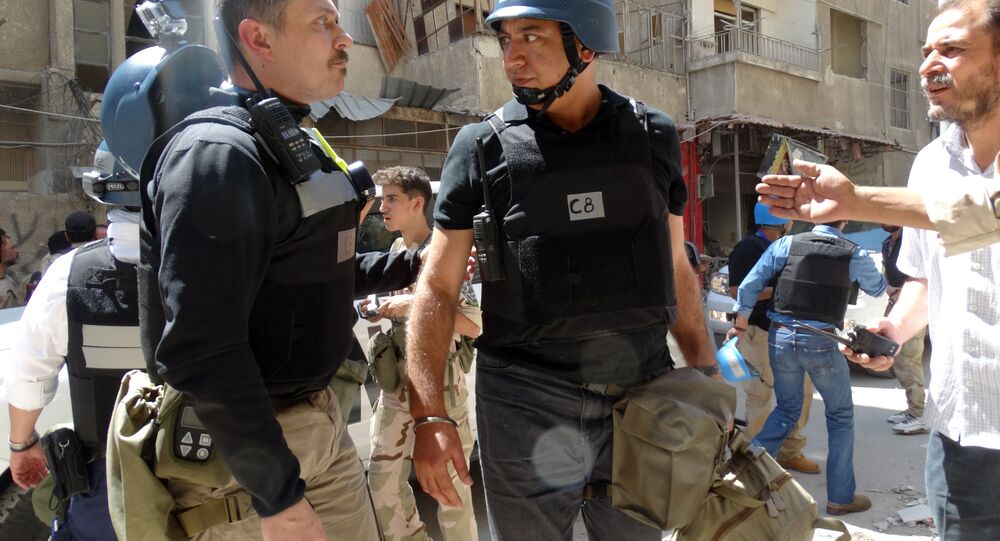 France could be responsible for the 2013 Ghouta chemical weapons attack along with several other countries with similar motives and capabilities, former envoy to the UN James Paul told Sputnik.

© REUTERS / Yaseen Al-Bushy
Syrian Opposition May Be Behind 2013 Ghouta Chemical Attack - French General
WASHINGTON (Sputnik) — "Many hawkish parties keen for a Syrian intervention might have seen a black operation using such weapons as a logical move," Paul said on Wednesday. "France could have been one such party, Britain another, the United States a third. But the list is long."

Representative of the Syrian Republic to the UN, Bashar al-Jaafery told Sputnik in an exclusive interview this week that there was evidence suggesting the involvement of France in the these attacks.

Paul cautioned that there were other suspects with motives to try and embroil the United States in a full-scale war with Syria.

"Israel’s Mossad, a very capable intelligence service with surely many assets in Syria, would be another possible source, as would Turkish intelligence and the Saudis," he said.

The Syrian rebel groups probably could not have carried out the operation given their lack of sophistication in the use of such weapons, but they might have been involved as a partner with one or more of the others, Paul suggested.

"The attack was generally reported to have been the responsibility of Assad’s military forces, and it nearly led a military attack on Syria by the United States, the UK and France. Eventually, the attack was called off and there followed an agreement under which Syria gave up its chemical weapons," he recalled.

Paul pointed out that the source of the attack was never determined with certainty.

"UN weapons inspectors confirmed that toxic chemicals had killed many people and injured more, but they were not able to determine the source of the attack," Paul noted.

Paul questioned why Syrian government forces would have carried out such an attack on the very day that UN chemical weapons inspectors were in Damascus.

© Sputnik / Andrei Stenin
Difficult to Find Responsible for 2013 Deadly Ghouta Gas Attack - French MP
"There are many governments and intelligence services with interests in the conflict whose intervention in this case cannot be ruled out… We may never know who launched the nasty chemical weapons on Guta," he concluded.

On Wednesday, the UN and Organization for the Prohibition of Chemical Weapons released the results of a probe into chemical weapons attacks in Syria in 2014 and 2015 that implicate the Syrian government and Daesh terrorist group, according to the White House.

James Paul served as Global Policy Forum Executive Director from its foundation in late 1993 through the end of 2012, and was the representative to the International Federation of Human Rights at the UN.