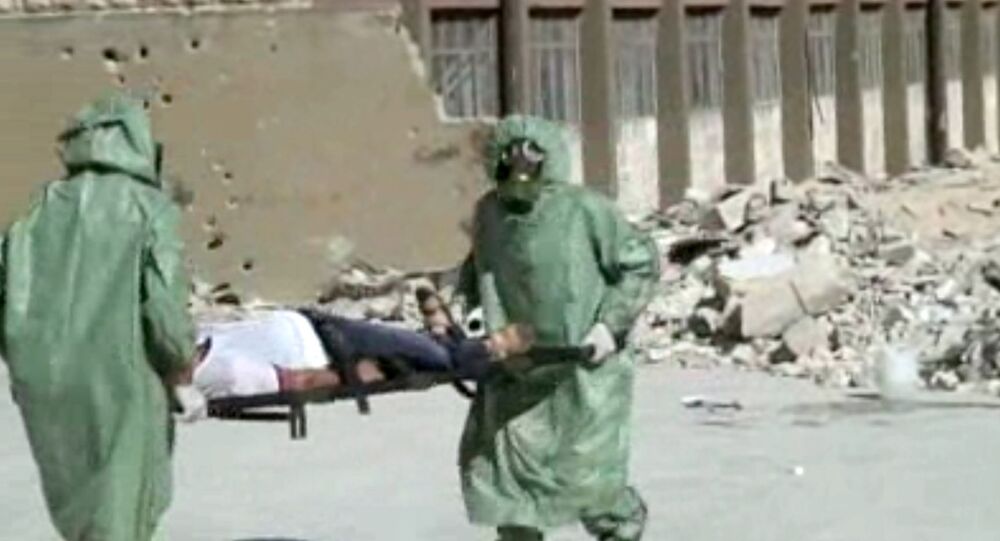 Representative of the Syrian Republic to the UN, Bashar al-Jaafery, spoke to Sputnik in an exclusive interview regarding the deadly chemical attacks that took place in Syria back in 2013 and the involvement of France in these attacks.

© Sputnik / Andrey Stenin
Military Defeats Could Force IS to Carry Out New Chemical Attacks - Russian Foreign Ministry
“The case with chemical weapons was initially fabricated to exert pressure on the Syrian government. After the first chemical gas attack on Khan al-Asal in Aleppo, I went to the Secretary-General (UN approx.) to request assistance to the Syrian government in investigation for answering if there actually was a chemical attack and who was behind it?” Jaafrey told Sputnik.

The Secretary-General said that he must consult with the UN Security Council countries first.

“Three hours later after consultation with the countries of the UN Security Council, he came back to me and said, ‘Tell your government that I will assist and sent a delegation of experts who will be engaged in investigating the chemical attack in Khan al-Asal.’”

However, according to Jaafrey, the Secretary-General added that he will not be able to assist in determining the party behind the attack.

“From that moment, it became clear that the UN Security Council members are interested in keeping the party behind the attacks unnamed due to certain political circumstances,” Jaafrey said.

He further said that the issue of chemical attack has not yet been closed. After the investigation request, it took 4 months and 11 days for Dr. Ake Selstrum and his team to arrive to Khan al-Asal.

“On the same day, when Selstrum was in Damascus and was preparing to go to Khan al-Asal in Aleppo, a second chemical attack took place in the eastern Huta in Damascus, after which a political campaign (against Syria) began,” according to the representative.

© Sputnik / Mikhail Voskresenskiy
Militants Use Chemical Weapons in Syria's Aleppo
The purpose of the Huta attack was to distract from Khan al-Asal, to create obstacles to keep Selstrum from traveling there, as well as to focus everyone’s attention on Damascus. The plan was a success, as Dr. Selstrum has not yet visited Khan al-Asal, according to Jaafrey.

“According to the French sources and according to the book ‘Road to Damascus’ the famous French journalists Georges Malbruno and Christian Shesno have documented evidence to prove the involvement of the former French Foreign Minister, Laurent Fabius, in the Eastern Guta tragedy near Damascus,” Jaafrey told Sputnik.

“At the moment, we have sent hundreds of letters to the UN Security Council, the Commission of Inquiry under 1540 and to the mission of fact-finding and joint investigation. All of them were created after the incident in Khan al-Asal in the Eastern Guta and near Damascus. In our letters there was transparent information,” the representative said.

However, the UN Security Council member states either ignored the data, or accused it of being unreliable. They did not pass the data to the media, nor did they mention it in their statements. “This was due to the fact that the party behind these chemical attacks has the support of these countries,” Jaafrey said.

The representative further said, “Do I have to prove that there are terrorists who arrived on board Libyan aircraft from Libya to Istanbul with two liters of sarin, after which they arrived at the Syrian border in Gaziantep, and then tested sarin on rabbits at the Turkish base in Gaziantep?”

“Later on, these terrorists posted a video proclaiming, ‘Today we have tested it on rabbits and tomorrow we will test it as a weapon on the Syrian Army,’” Jaafrey said.

He further said that this information did not come from “planet Mars and we provided this evidence.”

“How can the transport of arms across the Turkish border into Syria be justified under the pretext that this is humanitarian aid? This case was raised in Turkey, after which Erdogan imprisoned 18 officers of the customs service and dismissed four judges, because they revealed information about these trucks with ‘humanitarian aid’,” the representative told Sputnik.

© AFP 2020 / JM LOPEZ
UN Chief Says Works Closely With OPCW on Alleged Chemical Attacks in Syria
He further spoke about how the Turkish people are well aware of this because there have been demonstrations on the matter. Today terrorism has clearly spread to Turkey.

“It is impossible to defeat Daesh in Syria without first defeating it in Turkey. How can Turkey say that it is fighting Daesh in Jarabulus if Turkey itself allowed the establishment of Daesh and helped in the development of it by providing thousands of Toyota cars and other branded cars with built-in weapons? It further provided funds from the Persian Gulf to purchase  weapons from Ukraine, Croatia, Bulgaria, etc,” Jaafrey said.

He noted that Turkey’s actions speak for themselves and that if they actually want to help they must coordinate their efforts with Syria and form a real coalition to help fight the terrorists.

“There is no doubt that there is Russian-Iranian pressure on Ankara to change its policy toward Syria. Turkey says one thing and does another. We hear good speeches every day but no real action can be seen. If there were any new actions consistent with their statements, they would not have started the operation in Jarabulus,” Jaafrey pointed out.

The representative noted that there is no change in the political tone of Turkey.

“The US uses Turkey, the armed wing of the PKK, al-Nusra Front and others. This is known. The most ordinary diplomat in the UN already understands what is happening in Syria and Iraq. The fight against terrorism can only happen through the creation of a fair international coalition in coordination with the Syrian authorities.”

He further said that it is wrong for anyone who pleases to fight terrorism to send in their planes into Syria and say, “I will support this but will not support this and that too without any consent of the Syrian government. We live in the 21st century, not in the woods. People have forgotten that there is international law,” concluded Jaafrey.