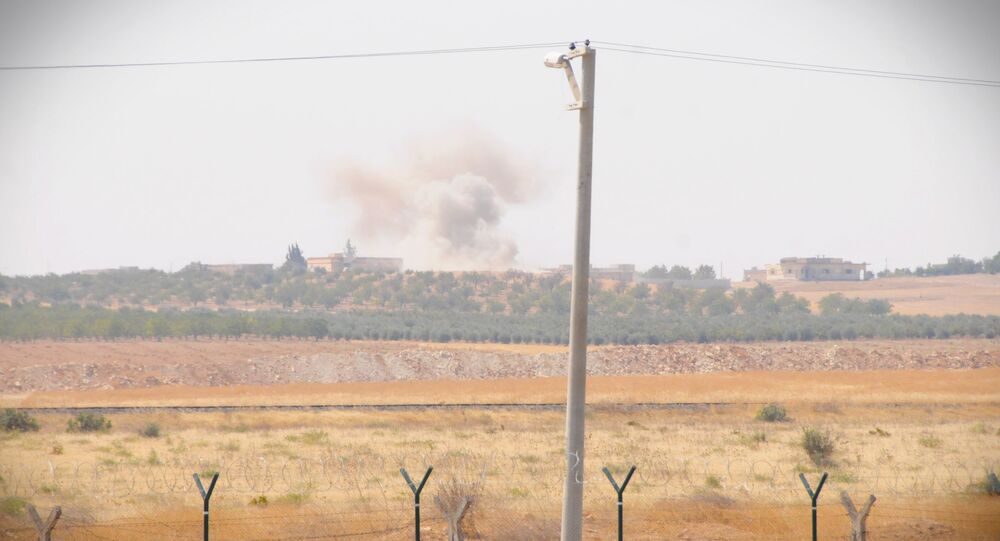 On Wednesday, Turkey launched a military operation in the bordering area in the Syrian city of Jarablus.

© REUTERS / Ihlas News Agency
Turkey 'Unlikely to Increase Its Military Presence' in Syria After Jarablus Operation
The major offensive aimed against Daesh started with intensive shelling and airstrikes. Turkish special forces and tanks then crossed into the Jarablus area, destroying 70 militant targets. Approximately 5,000 Free Syrian Army fighters are said to be taking part in the operation that is also expected to be backed by American warplanes.

With the operation in Jalabrus, Ankara wants to break regional isolation, change the regional balance of power and return as a major party to the Syrian crisis, Huseyin Bagci, a political analyst at the Middle East Technical University (ODTU) in Ankara, said.

"One of the preconditions for such a move is that Turkey is now working with Russia on Syria and Russia is one of the most important players involved in the conflict. Russia is the leader and Turkey is following," the expert told Sputnik.

Such a situation presumes that Moscow and Ankara are working together.

"The Jarablus operation was authorized by the United States and Russia. This was a coordinated move," he pointed out.

Currently, northern Syria, including Jarablus, is controlled by Kurdish forces. For Turkey, the priority goal was to prevent a Kurdish corridor but it failed. The Jarablus operation is aimed not only against Daesh. Another goal is to prevent Kurds from boosting their positions to the West from Euphrates.

© REUTERS / Stringer
Erdogan: Turkish Operation in Syria Aimed at Eliminating Threats From Daesh, Kurds
"For Ankara, the Kurdish problem is a matter of national security. But I don’t think that Kurdish forces are a serious threat for Turkey since now Kurds are seeking an autonomous entity in Syria. In other words, this is not about establishing an independent Kurdish state," Bagci said.

According to the analyst, the Jarablus operation also has a symbolic meaning for the Turkish Armed Forces because their international image was damaged by an attempted coup on July 15.

Bagci also suggested that Turkey will continue to expand its military presence in the region.

"Of course, Turkey has military capabilities sufficient to fight terrorism, including at the Syrian border. The question is whether Turkey will be able to effectively cooperate with other players in the region. Ankara has made a U-turn in its strategy and engaged in a large-scale counterterrorism operation," the expert said.