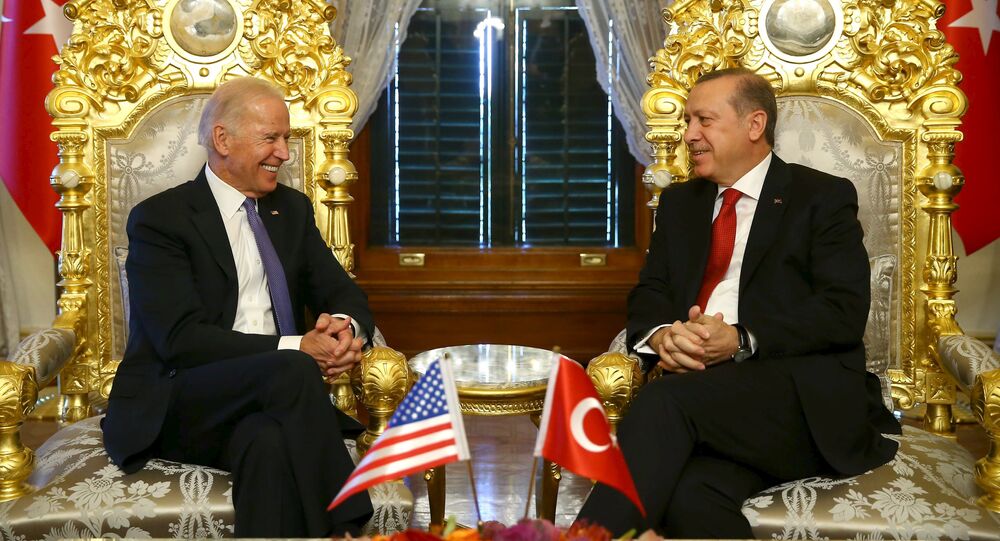 Biden in Turkey: 'For Delicate Diplomacy, I’m Not Sure He’s the Guy You Send'

After Turkey’s Prime Minister blamed Washington for destroying ties between the two countries, US Vice President Joe Biden was sent to Ankara to mend fences with Turkish authorities. Daniel McAdams of the Ron Paul Institute assessed the prospects of bilateral relations between the states in an interview with Radio Sputnik.

Following the failed July 15 coup in Turkey, the US has refused, based on a lack of evidence, to extradite Fethullah Gulen, a cleric and former ally of Turkish President Erdogan, now living in exile in rural Pennsylvania. Gulen is accused by Erdogan of orchestrating the revolt. Since that time relations between the states have plunged, with Ankara accusing Washington of facilitating the attempt to overthrow Erdogan’s administration.

“Just after the coup, John Kerry threatened Turkey’s NATO membership over a crackdown of the coup. This is very interesting and delicate moment in that part of the world,” McAdams said to Brian Becker of Loud & Clear.

© AFP 2020 / ARIS MESSINIS
Turkey’s PM: America’s Harboring of Coup Mastermind Gulen is “Destroying” Bilateral Ties
Turkey treated a reluctance on the part of the US to publicly side with Erdogan after the coup attempt as a betrayal, and turned to regional powers in search of new allies, he said.

Erdogan met with Russian President Vladimir Putin in St. Petersburg, for the first time since the downing of a Russian attack aircraft by Turkey over Syria in 2015. Despite accusations that, in the long term, Erdogan may appear to side with Russia only to blackmail the West, the immediate implications of rapprochement between Ankara and Moscow marked a “significant shift” in Turkish policy, especially regarding Syria, according to the analyst.

“Turkey for the first time since 2011 has envisioned the possibility of [Syrian President] Assad being in power while the transition is being discussed,” McAdams said, regarding the aftermath of Erdogan’s visit to Russia.

© AFP 2020 / DELIL SOULEIMAN
Ankara’s Fear of Kurdish State Drives Turkey to Compromise Over Assad
Erdogan has reportedly begun mulling over siding with Assad to take on Kurds seeking their own statehood.

Despite Assad’s deep cooperation with the Kurdish People's Protection Units (YPG) militia in the face of Daesh in recent years, the Syrian president views the Kurds as a threat to a united Syria, McAdams claimed. Erdogan suffers from the same malaise, as millions of Kurds reside in the Turkey’s southeast.

The YPG is widely supported by the United States, and is shown to be effective in their fight against Daesh in Syria, and will be unlikely to lay down their weapons, in dealing with legitimate governments, the expert suggested.

The US restructuring plan for the war-torn country will mean the fragmentation of Syria, McAdams assessed.

© AFP 2020 / SEDAT SUNA / POOL
Biden's Turkey Trip Could Be Bid to Save Face Following Botched Coup Attempt
“This is a typical US divide and conquer policy. They realize they will not be able to take down Assad with the arrangement of forces that they have in power, and probably realize that what follows him will be much worse, viewing the nature of the groups that they are backing.”

McAdams suggested that the same scenario being played out in Syria could be played in Turkey. “Certainly Erdogan should be worried of this expansion of Kurdish territory in Syria.”

In this context, sending US Vice President Joe Biden to Ankara is unlikely to be able to sweeten the bitter pill, in the view of McAdams.

“He called Serbia ‘Croatia,’ he said to Japan ‘We wrote your constitution.’ When you want delicate diplomacy, I’m not sure that Biden is guy that you send,” the analyst said, adding that a realignment of policies and loyalties is happening now, and the climate of negotiations boils down to, “fasten seatbelts for the next few weeks.”