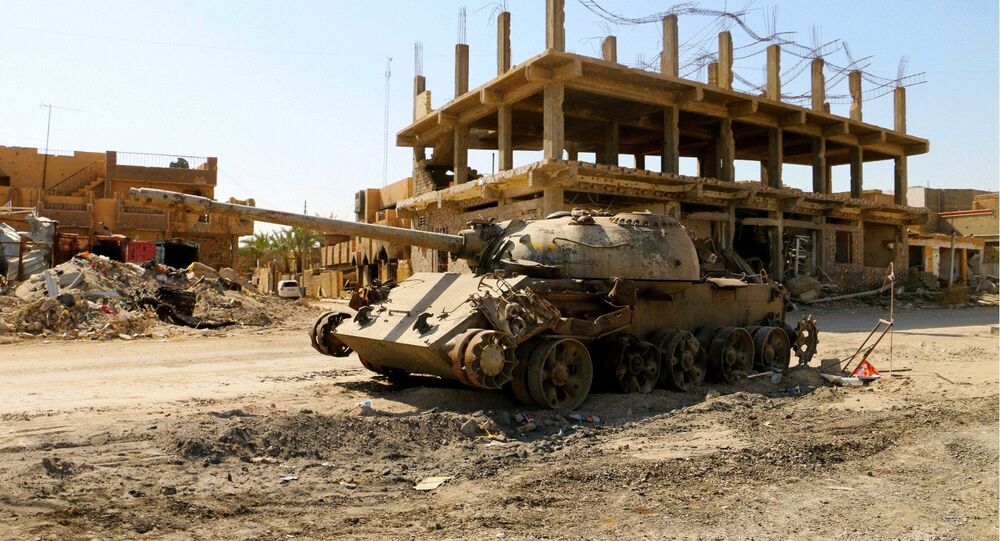 Sputnik Photographer Captures Hellscape of Ramadi After Liberation from Daesh

Returning to their native city of Ramadi, central Iraq, recently liberated from the Daesh (ISIL/ISIS) terrorists, residents have discovered that their homes have been destroyed, while roads have been turned to ruins. Their beloved city has become uninhabitable. Sputnik shares unique photos from the city showing the extent of the devastation.

Tens of thousands of families who fled their homes in 2015 after Daesh militants captured the city of Ramadi have returned home. The grueling military operation to liberate the city began in December. The army assisted in the evacuation of civilians before launching their assault.

Sputnik offers exclusive photos from on the ground in the ruined city, the capital of Iraq's western Anbar province, which has been turned into a ghost town by the fighting. Its roads, once full of cars, are now clogged with debris from the rubble of nearby buildings. Some roads now feature the rusted remains of burnt out tanks and other heavy military equipment.

© Sputnik / Nazek Muhammed
Ruined buildings in the city of Ramadi.

Returning to his home city from a refugee camp, local resident Abu Samer told Sputnik Arabic that returning residents and members of law enforcement are dying every day from mines in homes and streets planted by the insurgents.

"Forty-three thousand families have returned to Ramadi after a long stay at camps in Baghdad, Kirkuk and Hilla," Samer said. "The whole northern part of the city has been mined by Daesh militants, and has yet to be cleared. Over 150 people have been killed due to exploding mines across the city."

© Sputnik / Nazek Muhammed
A burnt out tank in one of Ramadi's residential neighborhoods.

According to Samer, the city has no electricity, no centralized water supply, and there is a deficit of fuel. "Residents are forced to purchase and use generators to create electricity, and to buy drinking water on the black market," he noted.

© Photo
Collapsed building in the city of Ramadi.

Rajeh al-Issawi, the head of the Anbar Province Security Committee, told Sputnik that municipal workers are working around the clock to restore electricity and water supply. He estimated that upwards of 80% of the city was destroyed in the war against the terrorists.

© Sputnik / Nazek Muhammed
Excavators in the city of Ramadi. Municipal officials told Sputnik they are doing everything in their power to bring the city back to life.
...
Reddit
Google+
Blogger
Pinterest
StumbleUpon
Telegram
WhatsApp
145