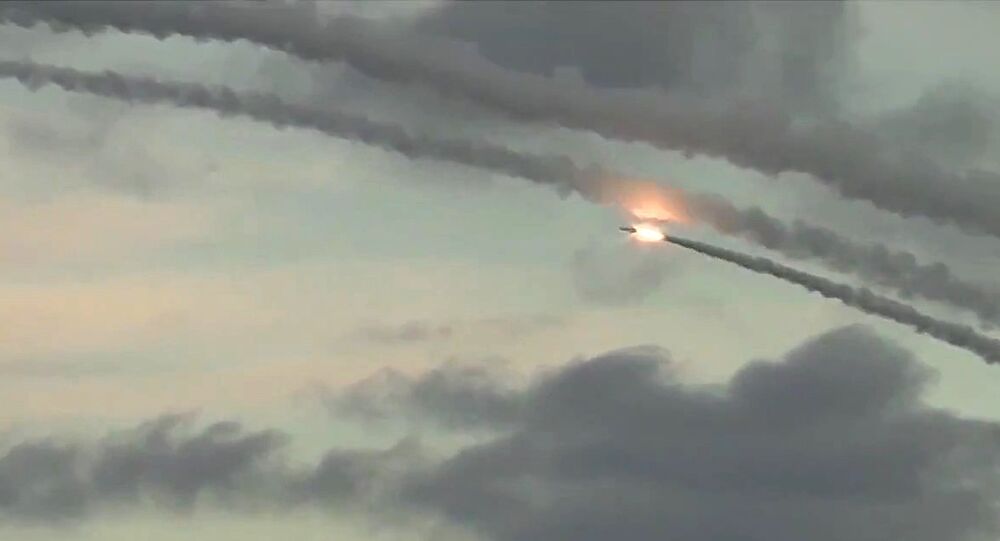 The strikes destroyed a terrorist command center and a base Dar-Taaza, as well as a major plant producing mortar ammunition and a large arms depot in the Aleppo province, the ministry said.

#SYRIA
Results of strike with #Kalibr missiles on a plant manufacturing mortar munitions in Syria pic.twitter.com/Pp61YdKOld

"Today, at 10:55 a.m., Zelyony Dol and Serpukhov small-sized missile ships of the Black Sea Fleet carried out three launches of sea-based Kalibr cruise missiles on al-Nusra Front targets in Syria from the eastern part of the Mediterranean Sea during combat maneuvering."

© AP Photo / WarfareWW
Russian-Iranian Breakthrough: Cruise Missiles and Hamadan Airbase
"The transit corridor for the Kalibr cruise missiles from the Mediterranean Sea was planned over an unpopulated area to ensure the safety of civilians," the ministry said.

Russia's Kalibr cruise missiles that have a range of 2,000 km were first used in combat in October 2015, when the Gepard-class frigate Dagestan, part of the Caspian Flotilla, and three other Russian Navy corvettes launched 26 Kalibr-class cruise missiles from the Caspian Sea at 11 targets in Syria as part of Russia's aerial campaign against terrorists.

#SYRIA
Direct hit of Kalibr missile on a command centre and a terrorist base in Syria pic.twitter.com/0EGgUpqrGd