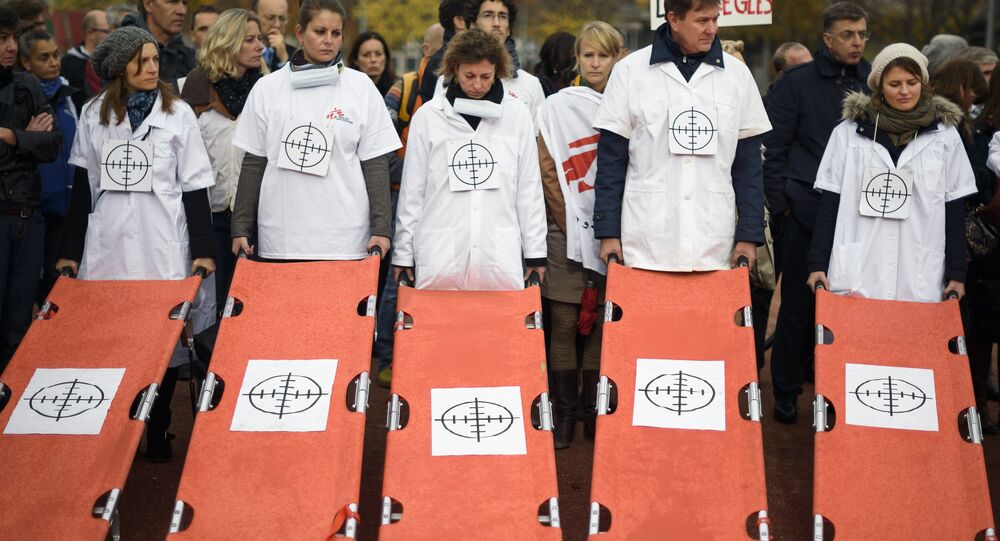 A Medecins Sans Frontieres (Doctors Without Borders, or MSF) — supported hospital in Yemen was hit by an airstrike on Monday leaving 14 people dead. This is the fourth time since January that the hospital in Yemen has been hit by the Arab coalition led by Saudi Arabia.

© REUTERS / Abduljabbar Zeyad
Germany Demands Inquiry Into MSF Hospital Bombing in Yemen by Riyadh
MSF, repeatedly shared the coordinates of a hospital in Yemen with all parties in the conflict in the country prior to the medical facility being hit by a Saudi-led coalition airstrike on Monday, the organization said on its official Twitter account.

In an interview with Sputnik, MSF representative in Yemen Hassan Boucenine said that the coalition members should launch an official probe into Monday’s incident.

“The bombings are unbelievably intensive. People are scared, they no longer have access to medical help. The country’s healthcare system is bankrupt with no money left to run the hospitals. And now this one has closed too, which means that people are no longer be able to receive free medical help, and some of them may die,” Hassan Boucenine said.

When asked whether an ”independent” probe by a team of experts from countries would bring any results, Pierre-Emmanuel Dupont from the London Center of International Law Practice said that he didn’t think that the Arab coalition was serious about investigating the incident.

”In cases like this international law requires an international panel of investigators. The 1977 Geneva Convention calls for an international fact-finding commission to be set up and this is exactly what MSF wanted after one of their hospitals was seriously damaged early this year. The problem is that for this commission to start working it needs the consent of all the countries involved in the conflict, but I don’t think that the coalition will greenlight this,” Dupont said.

He added that even though there exist various mechanisms on the UN level, he still believed that the matter was up to the Security Council to deal with.

Yemen has been gripped by a conflict between the government and the Houthi rebel movement since 2014.

The Saudi-led coalition of mostly Persian Gulf countries has been carrying out airstrikes against the Houthis at the request of President Abd Rabbuh Mansour Hadi since March 2015.

The United Nations has recorded well over 3,200 civilian deaths in the conflict, 60 percent of which it has attributed to the Saudi-led coalition airstrikes.