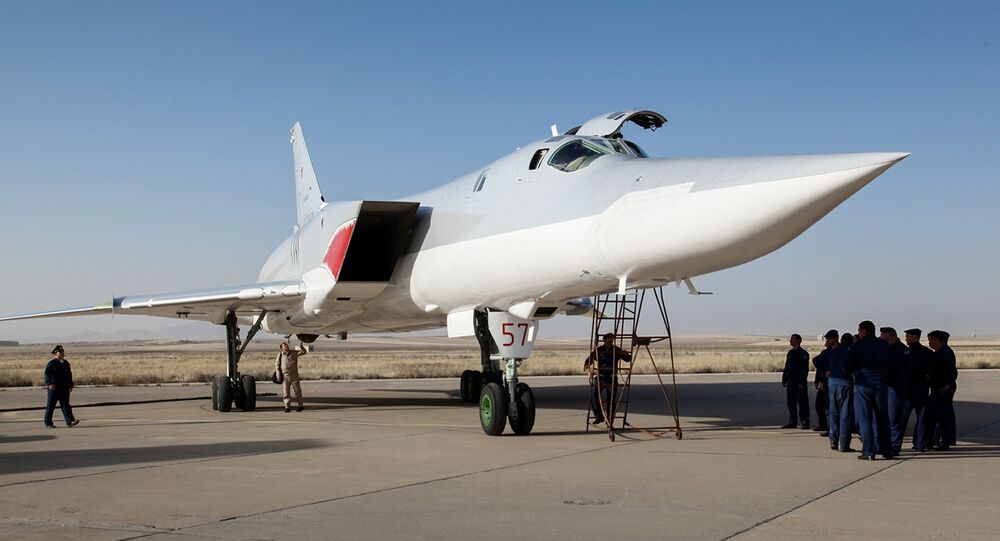 Russia deployed Tupolev Tu-22M3 supersonic long-range strategic bombers to the Hamadan airfield in Iran to cut flight times, increase bomb capacity and improve response capabilities of its aircraft taking part in the operation to liberate Aleppo since the outcome of this battle could well determine the future of Syria.

The Tu-22M3 deployment "does not merely help to save time and fuel," Svobodnaya Pressa reported. "Missions launched from the Hamadan airfield allow Russian aircraft to significantly increase bomb capacity of each plane." They are estimated to be capable of carrying three times greater payload.

© AP Photo / WarfareWW
In this photo taken on Monday, Aug. 15, 2016, a Russian Tu-22M3 bomber stands on the tarmac while another plane lands at an air base near Hamedan, Iran.

On August 15, an undisclosed number of the Tupolev Tu-22M3s and the Sukhoi Su-34s left the airfield in the Russian town of Mozdok located in the Republic of North Ossetia–Alania and landed at the Hamadan airfield in Iran.

Ministry of defence of the Russian Federation
Why Iran Allowing Russia to Use Airbase Has ‘Great Tactical Importance’
Some have questioned why the Tu-22M3s bombers were not deployed to Hmeymim since the Russian airbase in Syria is closer to Aleppo then Hamadan. The reason is simple. The Tu-22M3s are too heavy to use the airstrip in Hmeymim. But the base played a major part in the latest counterterrorism offensive. The Su-30SM and Su-35S aircraft that provided cover for the Russian bombers deployed to Iran took off from the base in Syria.

This tactic paid off. On August 16, Russian airstrikes destroyed five large ammunition depots with weapons, munitions and fuel, as well as militant training camps near the cities of Serakab, Al-Ghab, Aleppo and Deir ez-Zor cities. In addition, Russian bombers razed to the ground three command and control centers near the cities of Jafra and Deir ez-Zor. A "significant number of militants" were killed in what the Russian Defense Ministry described as a "concentrated airstrike."

These facilities, the ministry added, were used to support and assist radical groups fighting near Aleppo.

"The Russian Armed Forces have never carried out such a major and well-coordinated operation in terms of timing, multiple fronts and targets," the media outlet observed.

Defense analyst Anatoly Nesmiyan told Svobodnaya Pressa that the decision to deploy bombers to the Hamadan air base could have been made "in response to Iran's discontent with the situation around Aleppo."

The Islamic Revolutionary Guard Corps (IRGC) and Hezbollah, he added, were not happy that air cover did not arrive as fast as they needed it. "Perhaps, Iran allowed Russia to use its air base under condition that Russian aircraft will focus more on bombing rebel-held areas in Aleppo."

Ministry of defence of the Russian Federation
Russian Bombers in Iran to Make Fight Against Terrorism 'More Efficient'
Nesmiyan emphasized that Russian planes have long been active in the region, but they could not respond fast to militant offensives.

The analyst mentioned several challenges that the Russian-led counterterrorism coalition has faced. For instance, cooperation between Russian, Syrian and Iranian troops has not been fully established. "In addition, there are not enough planes at Hmeymim to strike all targets," he added.

Defense analyst Andrey Frolov, the editor-in-chief of Arms Export magazine, also pointed to time as the main issue behind the decision to send Russian bombers to Iran. He also mentioned several reasons behind the Tu-22M3 deployment.

Firstly, it helps "to drastically cut flight time and response time to militant activities," he said. "Using Hamadan also helps to increase bomb capacity. In addition, the Tu-22M3s could be used in the same way as the US employed the B-1B Lancers in their recent campaigns, for direct fire support operations."

© AFP 2021 / US NAVY / MC2 JACOB G. SISCO
US Ensured Safety of Russian Bombers Flying From Iran to Syria - Pentagon
Svobodnaya Pressa also pointed out that the Tu-22M3 deployment was part of a larger change in the strategic landscape with regard to the Syrian battlefield.

On August 12, the Zelenyy Dol and Serpukhov corvettes carrying eight Kalibr-NK cruise missiles left Sevastopol heading for Syrian shores. Meanwhile, a surface action group, comprising the Tatarstan and Dagestan frigates, as well as the Grad Sviyazhsk and Velikiy Ustyug corvettes, was deployed to the Caspian Sea. These ships were carrying a total of 24 Kalibr-NK cruise missiles.