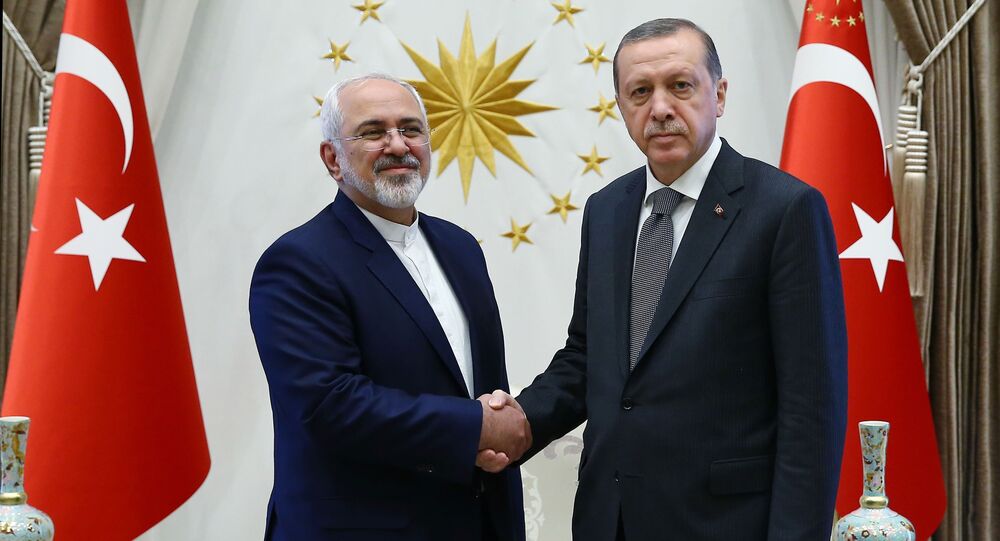 Iran, Turkey Might Set Up a Platform on the Settlement of the Syrian Conflict

Amid the visit by Iran’s Foreign Minister to the Turkish capital Ankara, where he is set to meet an array of senior Turkish officials, including President Recep Tayyip Erdogan, Turkish political analyst Bayram Sinkaya tells Sputnik that the two countries are very likely to set up a platform to discuss the settlement of the Syrian conflict.

Iranian Foreign Minister Mohammad Javad Zarif is on his official visit to Turkey on Friday to hold talks with high-ranking officials of the neighboring country, which is still reeling from a failed military coup.

Mohammad Javad Zarif comes at the invitation of his Turkish counterpart Mevlut Cavusoglu and is set to hold talks with Cavusoglu and to be received by Turkish President Recep Tayyip Erdogan at his palace.

© AFP 2020 / ADEM ALTAN
Turkish Foreign Minister Mevlut Cavusoglu (R) and his Iranian counterpart Mohammad Javad Zarif address a joint press conference following their meeting, next to a picture of Mustafa Kemal Ataturk, founder of the Turkish Republic, at the Foreign Ministry in Ankara on August 12, 2016

Sputnik Turkiye sat down with Turkish political analyst Bayram Sinkaya to discuss the possible outcome of the talks.

“The parties to the talks will unilkely set a joint mechanism for the settltement of the Syrian conflict on such a high level, as it was done between Turkey and Russia,” Bayram Sinkaya, who is Faculty Member at Yildirim Beyazit University, told Sputnik.

However, he added, Turkey and Iran might open a dialogue within a so-called “consulatory mechanism” where both sides could exchange opinions on the key issues in the bilateral relations.

© REUTERS / Kayhan Ozer/Presidential Palace
Turkey Could Enter Syrian Fray as Part of Russian Anti-Terror Coalition
The expert stressed that it won’t be a Turkish-Iranian regional alliance, as both Ankara and Tehran don’t currently have the potential for such bilateral relations that could alter the balance of power in the region.

Nevertheless the two countries could set a platform for the comprehensive exchange of views and ideas regarding their bilateral relations and, in particular, regarding the settlement of the Syrian conflict.

The expert noted that the earlier phone conversation between Turkish President Erdogan and Iranian leader Hassan Rouhani, where Recep Tayyip Erdogan stressed his intention to more actively cooperate with Russia and Iran on finding the decisions to the regional problems, also might serve as a proof to his suggestions.