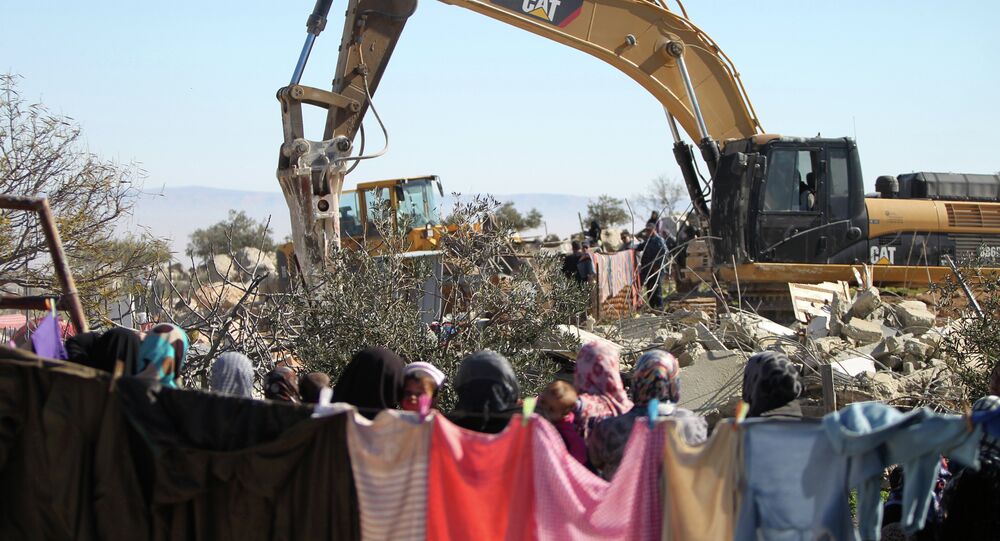 The US has slammed Israel's "provocative" razing of Palestinian buildings in the West Bank, saying the demolition of the five structures "raises serious questions" about Israel's commitment to peace.

The US State Department said it had been "troubled" by the latest razing of three EU-funded shelters and two other buildings in the Palestinian village of Umm el-Kheir, in the South Hebron Hills.

"We remain concerned about the increased demolition of Palestinian structures in the West Bank and East Jerusalem, which reportedly have left dozens of Palestinians homeless, including children," spokesperson Elizabeth Trudeau said.

​The village, which is near the Israeli settlement of Carmel, is located in Area C of the West Bank, meaning locals are confronted with strict construction guidelines, while the area is also under constant control from the Israeli military.

Israeli human rights organization B'Tselem said 27 people, including 16 minors, were now homeless as a result of the demolitions, with many of them among those who had lost their homes during previous demolitions in the same village.

"Israel is relentlessly destroying Palestinians' homes and livelihoods in order to make way for more illegal settlements," he said.

© AFP 2021 / Jaafar Ashtiyeh
A Palestinian man walks amidst debris after Israeli authorities demolished a building in the village of Sebastia, near Nablus, in the Israeli-occupied West Bank on August 9, 2016

The issue of destroying Palestinian structures in the occupied territories has been an issue of friction between Israel and its western allies, with the EU and US denouncing such actions, while calling for a halt in the construction of further Jewish settlements on occupied Palestinian land.

In July, B'Tselem said Israel had destroyed more Palestinian homes in the first six months of 2016 than in 2015, claiming 740 Palestinians had been displaced.

A pic of demolition carried out this morning at Umm al-Kheir, South Hebron Hills pic.twitter.com/mXsBZaEoRu

​The tension also led to a diplomatic standoff between Israel and the EU, after officials in Brussels required all products coming from the occupied territories to be labeled as such when being sold in European markets.

However, not all have criticized the latest demolitions, with local Jewish councilors arguing the buildings should have been taken down as they had not adhered to licensing laws.

Haaretz: Israel admits that parts of the land on which Ofra settlement was built were confiscated (declared as "State land") "by mistake"

​"I hope this signals the beginning of a new trend because until now the message sent by Israel's reluctance to enforce the law was that this kind of construction was approved of. This brought about an increase in the scope of illegal construction by the Arabs," Head of the Har Hevron Regional Council, Yochai Damar, said.

"We can't have such blatantly selective enforcement. We in Har Hevron have been dealing with a construction freeze for over a year now. Every pipe and every caravan are put under the most exacting legal microscope while right next to us there are people who build whatever and whenever they want in open contempt for the law," he added.

US Slams Israel for Sealing West Bank After Shooting, But Won’t Take Action