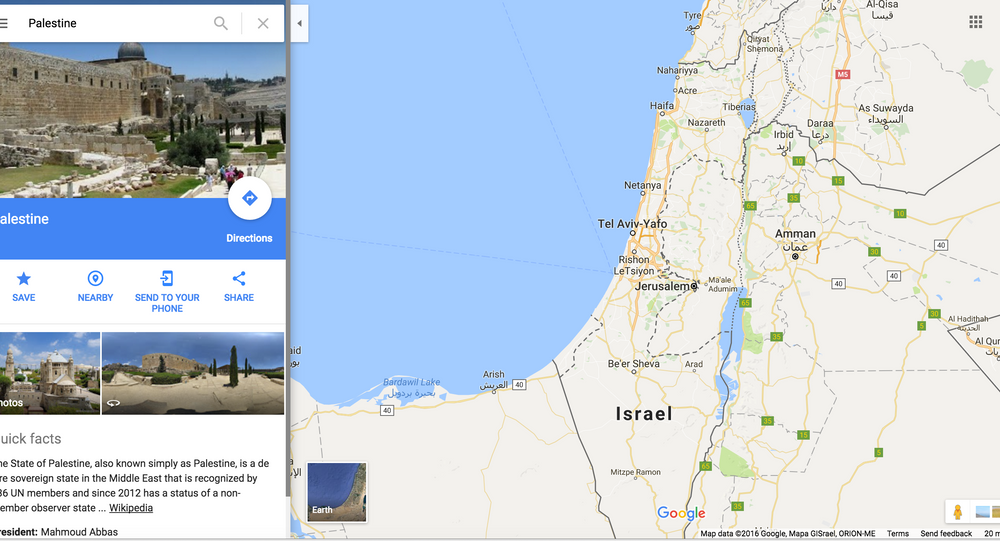 #BoycottGoogle: Backlash After Palestine Wiped From the Map

The Palestinian Journalists’ Forum said the decision "is part of the Israeli scheme to establish its name as a legitimate state for generations to come and abolish Palestine once and for all."

Google, the world’s most widely-used search engine, is garnering sharp criticism for deleting the name Palestine from areas of its maps and replacing it with the name Israel.

"The move is also designed to falsify history, geography as well as the Palestinian people’s right to their homeland, and a failed attempt to tamper with the memory of Palestinians and Arabs as well as the world," the journalists said in a statement.

Currently, if Palestine is typed into Google Maps, the search engine will be directed to Gaza and Jerusalem. The Palestinian Journalists’ Forum say the removal is "contrary to all international norms and conventions," and is urging Google to immediately return Palestine to its maps.

A Change.org petition to restore Palestine to Google Maps has garnered nearly 150,000 signatures as of Monday, and people critical of the removal have taken to Twitter using the hashtag #BoycottGoogle to voice their condemnation.

The petition reads, "The omission of Palestine is a grievous insult to the people of Palestine and undermines the efforts of the millions of people who are involved in the campaign to secure Palestinian independence and freedom from Israeli occupation and oppression," and "Whether intentionally or otherwise, Google is making itself complicit in the Israeli government's ethnic cleansing of Palestine."

More than 750,000 Palestinians have been displaced since the foundation of Israel in 1948, and Jerusalem continues to expand its settlements into the West Bank.

Palestine Expects No Progress in Peace Talks With Israel