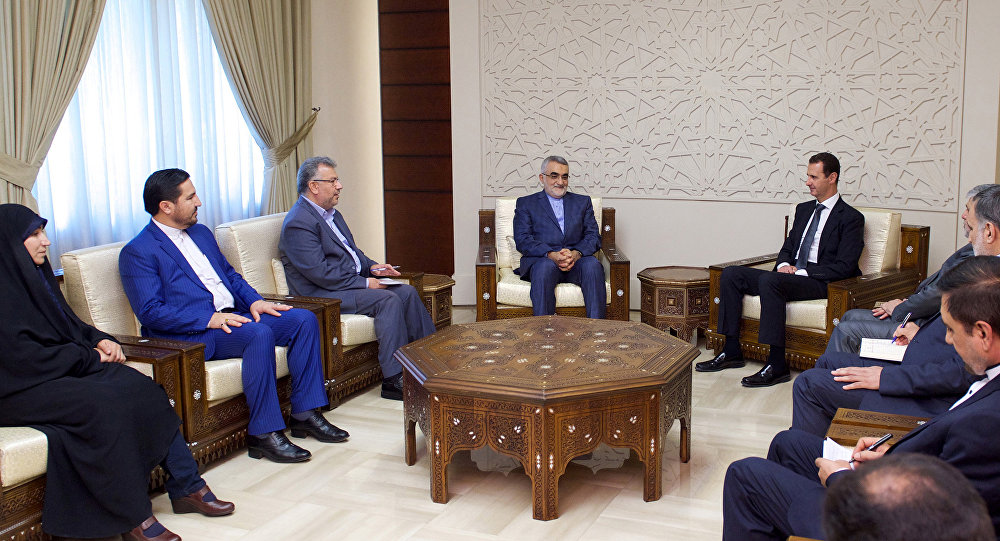 The West Has Obviously 'Decided Against' Toppling President Assad

As the US has missed yet another deadline it had previously set for Syrian President Bashar Assad's transition out of power, some Middle East analysts suggest that the West has dropped its idea of toppling the legitimate Syrian leader, especially given that he enjoys such strong support from Russia and Iran.

© REUTERS / Ammar Abdullah
Blindsided in Aleppo: US Misses Yet Another Red Line It Set for Assad in Syria
Back in May, US Secretary of State John Kerry set a new deadline for Syrian President Bashar Assad's transition out of power: August 1.

Four days past the deadline there seem to be no further demands for the legitimate Syrian leader to go.

German Middle East analyst Guido Steinberg suggests that the US has taken a reality check and has understood that it is a hard-hitting purpose especially with such a support that President Assad is getting from Russia and Iran.

Thus, Washington apparently is no longer betting on ousting the Syrian leader however still reiterating that it would be desirable, the expert said in an interview with the German news service Tagesschau.

Meanwhile the US, he noted, is doing nothing to make it happen. Partly because the US and Europe need him in power to control the country and prevent the refugee influx into Europe.

There are about ten million people residing in Syria and thus the West is concerned that if the country is destroyed, the population of its large cities such as Damascus, Hama, Homs and Lattakia will flood Europe.

“Thus the US and its allies no longer want to topple the regime,” the expert suggests.

© REUTERS / Ammar Abdullah
In Syria's Aleppo Russia is Saving the US' Face
However Bloomberg View columnist Leonid Bershidsky provides another reason why the US seems to be dropping its demands for President Assad to go.

“With Russian air support, the regime forces and their Iranian and Lebanese allies are pushing back and holding the [Syrian’s army] siege [of eastern Aleppo], which cuts the rebels off from Turkey,” he writes in his article for Bloomberg.

“That's a nasty situation for the US,” he says quoting Michael O'Hanlon of the Brookings Foundation.

“In Syria, Putin is holding a much stronger hand. Unlike the US, he's backing a capable force that — with Russian and Iranian support — could take on the insurgents. The opposition has probably missed its best chance to negotiate a political transition now: Since the US is standing back, and so is Turkey, Assad, Putin, Hezbollah and Iranian forces are going to pummel them,” he further suggests.

Bershidsky further reasons that if the Assad forces take Aleppo, “the war will be essentially binary — between the Assad coalition and Islamic State (Daesh).”

For President Putin, he suggests, this is preferable to a negotiated solution: “The defeat of the opposition groups in Aleppo would make the US reluctance to leave Assad in power irrelevant. There would be no alternative.”

The columnist then says that the US “appears to be allowing Assad, Putin and Iranian generals to implement their plan.”

© AFP 2019 / ANWAR AMRO
Has Washington Finally Accepted That Assad Can Stay?
If they succeed in taking Aleppo, he says, they will face Islamic State without US support. They probably would be able to defeat the terror group if they're not forced to fight on several fronts.

Such a scenario will definitely put a blow to the US’ credibility as an international arbiter as eventually it may have to watch from the sidelines as “Assad and Erdogan gang up on the Kurdish militias that have received open American backing.”

However it still might be a better option, he suggests.

Meanwhile Russia's envoy to the United Nations in Geneva Alexey Borodavkin has also recently mentioned the fate of Bashar al-Assad, saying that "as far as we understand the United States is no longer talking about Assad's immediate departure."

Washington's updated stance on the issue, he added, focuses on saying that al-Assad "supposedly does not have a political future in Syria, but [the Americans] are not demanding that he resigns right away."