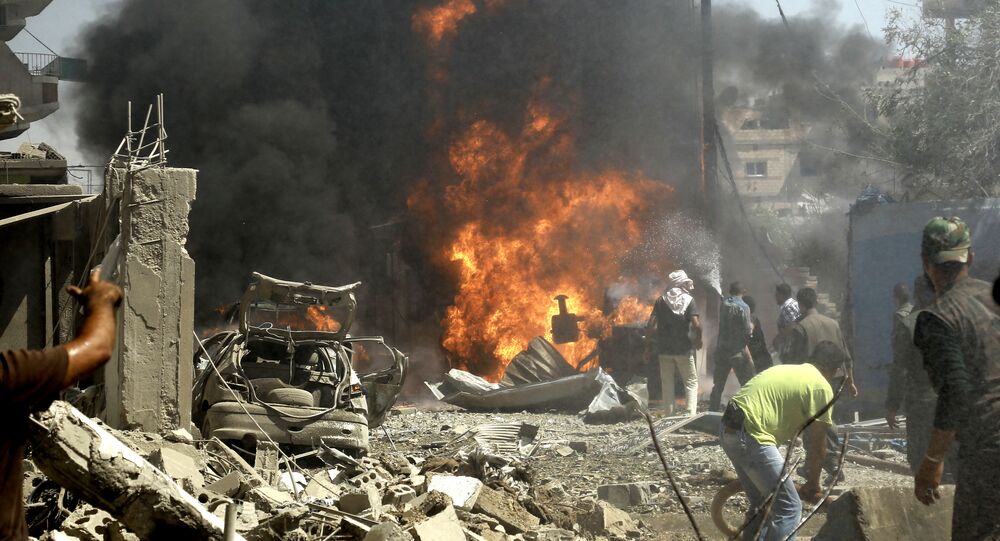 Daniel McAdams, executive director for the Ron Paul Institute for Peace and Prosperity, joined Radio Sputnik to discuss a comment made by a Hillary Clinton foreign policy aide who suggested that Syria would be a “first key task,” and whether actions implied by that remark will lead to a further deterioration of conditions in the Middle East.

© Sputnik
Hillary, Queen of War: The Road Map Ahead
Talking with Loud & Clear host Brian Becker, McAdams said that recent comments by Clinton aide Jeremy Bash sound to him like a rehash of the US neoconservative rhetoric on Syria in 2011, when the stated aim was to oust Syrian President Bashar al Assad. In the current environment, with a five-year civil war tearing the country apart, that concept looks outdated, he noted.

“The idea that Assad gassed his own people is not true. In fact, it has been proven false,” he said.

With Bash’s statement, the Clinton camp showed it has shifted toward a “super hawkish approach” in its foreign policy approach, a niche ordinarily occupied by the primarily-Republican neoconservatives. But the war-leaning policy itself is not surprising, given Clinton’s previous experience, McAdams outlined.

“There hasn’t been any intervention that she hasn’t supported,” he said. “She has been a driving force behind her husband’s decision to bomb Serbia. She supported Iraq; she was a prime architect of Libya, Syria. And I think her background speaks to that.”

McAdams suggested that it is not clear whether sending ground troops to Syria would eliminate Daesh and other terrorist ideologies, especially now, after two years of US bombings and five years of regime-change attempts leading to tens of thousands of civilians killed and widespread destruction in the country.

© AP Photo / Maya Alleruzzo
Clinton-Backed Iraq War Worse for Muslims Than Trump Rhetoric – Peace Activist
In this light, the statement on Syria from the Clinton campaign and, indeed, the Democratic Party and its apparent shift to right-oriented rhetoric, looks more like an electoral move than a clear plan of action, the analyst offered.

“This is just war propaganda played simple,” McAdams claimed. “It’s sad that this comes from a party that once had so many progressives who are against war.”

“People are not with either of those sentiments – the Hillary neocon or Trump bombing to hell,” McAdams said, “they are looking for something different.”

But according to the analyst, statements by both candidates play into the hands of the bloated US military-industrial architecture, seeking to wage war as a means of boosting revenue.

© REUTERS / Ammar Abdullah
Blindsided in Aleppo: US Misses Yet Another Red Line It Set for Assad in Syria
“This is an iron chain that dominates Washington. And I think they feel comfortable in the knowledge that Clinton will give them what they want. I don’t think they are crying tears if Trump wins, because he will not disappoint the military industrial complex either.”

The United States needs a president that can adopt a foreign politics posture that is not funded by weapons manufacturers, McAdams suggested. At the moment that candidate is Jill Stein, from the Green Party, but, as she is not a viable candidate, the only way for people to reverse the trend is to resist to the status quo.

“Until people realize they are spending spending $10mln to blow up a tank in Libya, like we did earlier this week, it will be destroying the middle class and bankrupting the country. Until they stand up and fight, we will have tough times.”