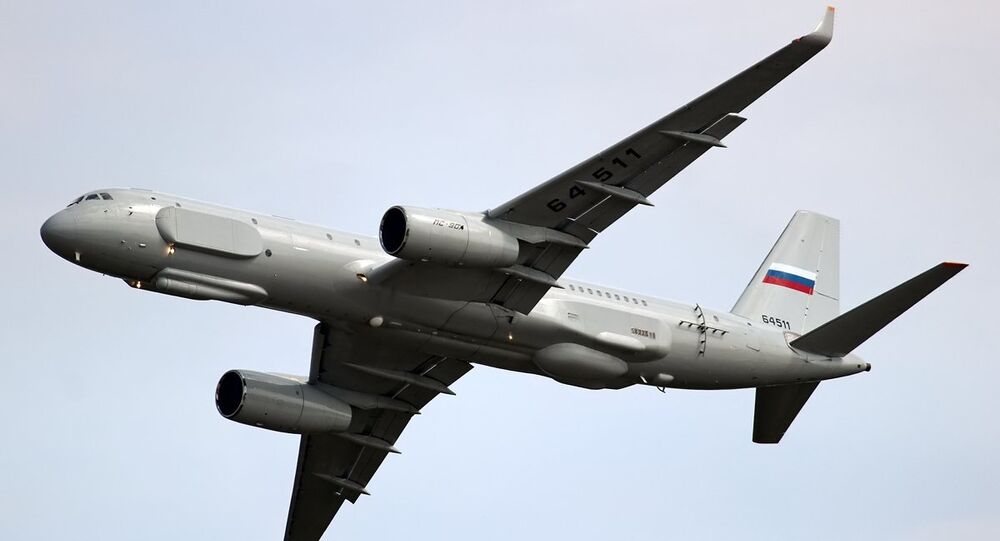 Russia’s Tu-214R reconnaissance aircraft fitted with cutting-edge optical and electronic equipment and radar systems has successfully fulfilled all of its tasks in the Syrian sky, according to Russia’s Defense Ministry.

© Photo : Wikipedia/Rimma Sadykova
Eyes in the Sky: Advanced Russian Spy Plane Conducts Test Flight
“Russia’s Defense Ministry has completed a report on the results of the Tu-214R operations in Syria,” Russia’s newspaper Izvestiya quotes one of the ministry officials, familiar with the situation, as saying on Thursday.

“The aircraft has performed to its best abilites. All the tasks set by the military commanders have been completely fulfilled, the equipment worked without any malfunctions. Upon the results of its operations, the aircraft has been recognized as fully mission capable,” the newspaper quotes the official as saying.

The major achievement, according to the newspaper’s source, is that for the first time the spy plane was operating not from its home base in the eastern-central Russian city of Kazan, but from Russia’s Hmeymim air base in Syria.

“The aircraft on-board equipment and its reconnaissance systems require careful maintenance by experts and special infrastructure. And if in Kazan everything necessary is always at hand, in Hmeymim the plane was serviced and maintained by the crew and the experts of the airbase. And there were no malfunctions,” an expert in radio-electronic systems who participated in maintenance works told the newspaper.

Upon completion of its operation in Syria the leadership of the aircraft developer, Tupolev Public Joint Stock Company, filed a request with the leadership of Kazan Aviation Plant, Radio-Engineering Corporation Vega and a number of other enterprises who have been servicing the aircraft in Syria, to reward the employees who have been working in Syria.

​Tu-214R is a joint project between the Tupolev Public Joint Stock Company, Radio-Engineering Corporation Vega and a number of other enterprises of the United Instrument Manufacturing Corporation, the Roscosmos State Corporation and the Almaz-Antey defense company.

The aircraft are configured to carry the MRC-411 multi-intelligence payload, to include electronic intelligence (ELINT) sensors, side-looking Synthetic Aperture Radar (SAR) and other Signals Intelligence (SIGINT) and Communications Intelligence (COMINT).

The antennae of the Tu-214R can intercept the signals emitted by enemy systems (radars, aircraft, radios, combat vehicles, mobile phones etc) to build an EOB (Electronic Order of Battle) of the enemy forces: where the enemy forces are operating, what kind of equipment they are using and, by eavesdropping into their radio/phone communications, what they are doing and what will be their next move.

© Sputnik / Ramil Sitdikov
After Pullout: What Could Force Russian Aircraft to Come Back to Hmeymim Airbase in Syria
These radars, included in the MRK-411 multi-frequency radio engineering system, are the eyes and ears of the aircraft: Operators receive information in active and passive (without revealing their location) modes and can intercept the enemy's radio communications.

The main feature of the Tu-214R's radars is ground-penetrating radar (GPR) scanning.

In other words, the aircraft can see through the ground. Any objects hidden under the ground, covered with snow or sand, or disguised by trees, will be detected by the Tu-214R. It will take a radar snapshot and immediately transmit the information to the command post.

The radio engineering system is complemented by the Fraktsiya electro-optical imaging system, used by the Tu-214R's crew to receive real-time, high-precision images of the terrain in the visible and infrared ranges.