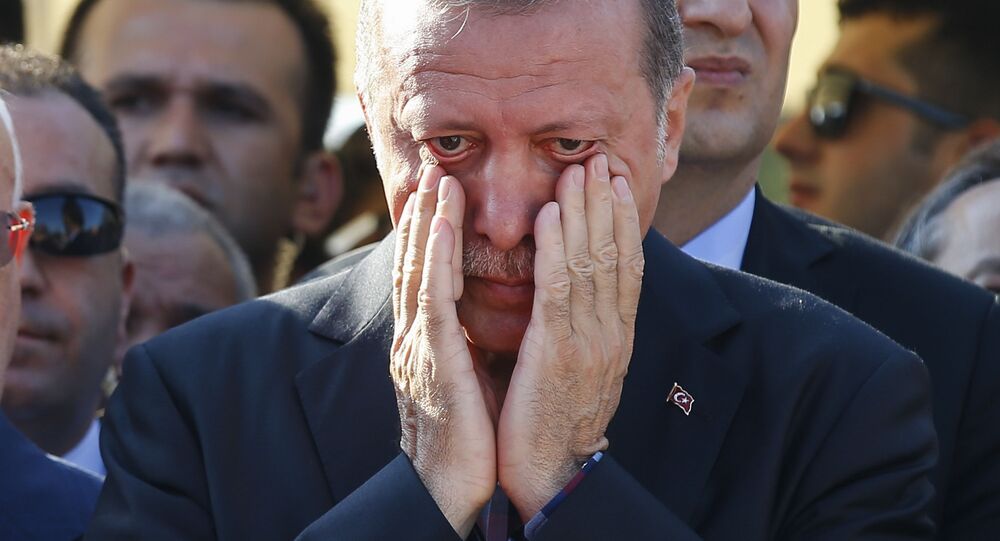 Turkish President Recep Tayyip Erdogan apologized on Wednesday "to God and the people" for his inability to prevent a recent coup attempt in the country.

© REUTERS / Yagiz Karahan
Council of Europe Sees Need to 'Clean Up' Turkey's State Institutions After Coup
ANKARA (Sputnik) — On July 15, the Turkish authorities said that an attempted coup was taking place in the country, which was suppressed the next day. Over 13,000 people have been detained in connection with the coup. Ankara said that US-based Turkish opposition cleric Fethullah Gulen, who Ankara believes is seeking to overthrow the current government, was linked to the coup attempt.

Gulen is also said to be the main suspect in the December 17-21, 2013, mass wiretapping investigation that targeted over 7,000 people.

"If it weren't for the measures that we took after December 17 [2013]…the attempted military coup would have been more ambitious. It would have involved not only the terrorists who entered the army, but their supporters in the police, courts and officials. Despite this, I am still disappointed that the true traitors were not identified beforehand. We are responsible for this. May God and my people forgive us," Erdogan said at a meeting of the Religious Council in Ankara.

Any doubts about Gulen's involvement in the coup attempt "have been left behind," but some people still believe the Islamic preacher has nothing to do with the coup, he noted.

© AFP 2021 / Adem Altan
No Wonder Ankara’s Mad: Failed Turkish Coup Costs Country Big
The 2013 corruption scandal in Turkey erupted when telephone conversations records of Turkish senior officials were published. In response, law enforcement detained dozens of people on corruption charges, many of whom were prominent Turkish businesspeople and the children of government members.

Following the scandal, several Turkish ministers resigned and some 70 high-ranking law enforcement officials were dismissed or transferred to other positions.

The Turkish authorities suspected at the time that Gulen and his movement, commonly known as Hizmet, were behind the wiretapping and subsequent corruption scandal. A number of Hizmet members had senior positions during this period in law enforcement and legal institutions.

Then Prime Minister Erdogan blamed the investigation on an international conspiracy and vowed revenge on Gulen and his supporters, whom Ankara deemed terrorists.

Some 60,000 People Suspended From Office in Turkey After Coup Attempt