Al-Nusra Front has cut ties with al-Qaeda to become more competitive as the terrorist organization is vying for power, fighters, financial assistance and local support in a crowded field of other radical groups who are trying to oust Bashar al-Assad and establish a caliphate in Syria, foreign policy analyst Daniel Pipes told Radio Sputnik.

Al-Nusra Front might be one of the more well known groups that have taken part in the Syrian conflict, but it is one of many local jihadi organizations.

"There are many competing groups with similar ideologies but different personnel and different tactics on the jihadi side in Syria," President of the Middle East Forum said. "They compete for allegiance of militia, money and help among the general population." 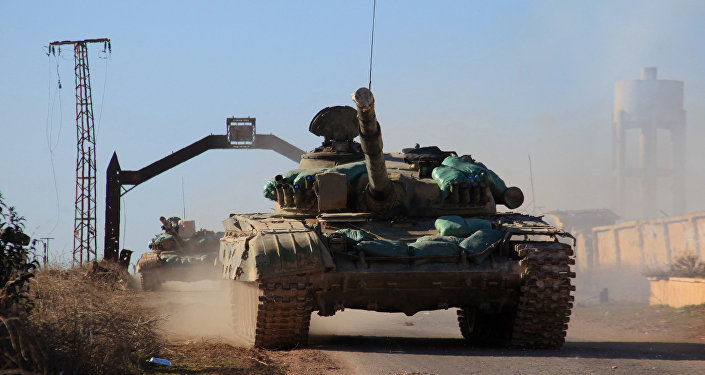 © AFP 2019 / GEORGE OURFALIAN
Syrian Forces Repel al-Nusra in a Major Offensive Marred by Suicide Attacks
Al-Nusra Front has apparently decided that it would be more competitive if it could make its own decisions instead of waiting for orders from its umbrella organization. This approach will give the group "more flexibility" and will allow it "to adapt to circumstances," he explained. This is strategy is most likely meant "to increase power within jihadi networks" in Syria.

Moreover, the terrorist group that was founded in January 2012 has found "it inconvenient to be connected to al-Qaeda," the analyst added.

"The al-Qaeda connection makes [al-Nusra Front] less viable in the very intense politics of jihadi groups within Syria. And so it's better to strike on its own, better to not be connected to this international organization," he explained.

© AFP 2019 / Fadi al-Halabi / AMC
Al-Nusra Front Rebrands Itself to 'Become as Powerful as Daesh'
The group's leader Abu Mohammad al-Julani announced the amicable split from al-Qaeda on July 28, adding that the group would not be linked to any foreign party. He also said that the organization changed its name to Jabhat Fateh al-Sham (Front for the Conquest of Syria). Al-Julani also urged other jihadi groups to join forces with al-Nusra Front to secure the victory in the Syrian conflict.

Although al-Nusra Front has tried to distance itself from Daesh and to present itself as a legitimate force in the war-torn Arab country, the United States has confirmed that the rebranding does not change the status of the group, which Washington, Moscow and the UN consider to be a terrorist organization.

Russia and the US recently agreed to make specific steps to reinforce the fragile ceasefire in Syria and intensify their campaign against al-Nusra Front. The rebranding will not affect these efforts.

"Foreign forces will continue to go after them," Pipes confirmed.

The analyst further noted that the split and the name change are more than a mere PR campaign, adding that "there is a potential status component to it."

Al-Nusra Front's decision to part ways with al-Qaeda "might be accompanied by actual changes in policy, behavior and personnel. I suspect it's more than simply a PR change. I think there is likely to be an effort to reach out to other groups to accommodate, to be more flexible," he said.