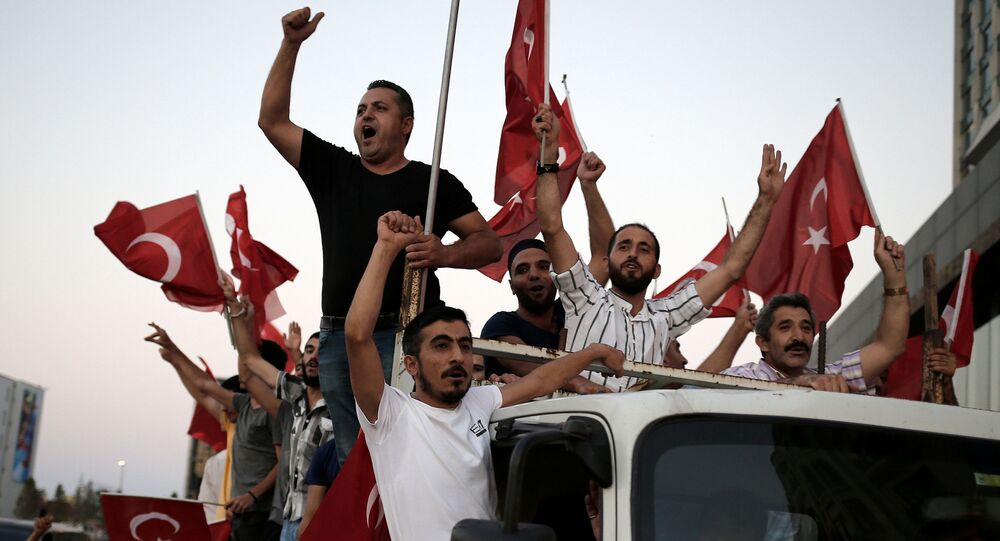 NATO finds itself in quite the predicament as one of its most important strategic partners continues to accuse the United States of aiding and sympathizing with Gulenists who attempted to overthrow the Erdogan government.

On Friday, Turkish President Recep Tayyip Erdogan condemned West for refusing to show solidarity with Ankara in the wake of  a failed attempt to overthrow the government saying that NATO 'allies' that are more concerned about the fate of coup supporters than the survival of Turkey are not friends of Ankara.

Erdogan blasted the West for criticizing the massive purge of Turkey’s military and other state institutions which has seen 60,000 people detained, removed or suspended over suspected links with the coup and for cancelling 50,000 civilian passports which many worry is but a prelude to an expansion of the reign of terror inside the country.

"The attitude of many countries and their officials over the coup attempt in Turkey is shameful in the name of democracy," Erdogan told hundreds of supporters at the presidential palace in Ankara.

"Any country and any leader who does not worry about the life of Turkish people and our democracy as much as they worry about the fate of coupists are not our friends," said Erdogan, who narrowly escaped capture and perhaps death on the night of the coup.

The statements come in response to US National Intelligence Director James Clapper’s statement on Thursday that the purges were harming the fight against Daesh in Syria and Iraq by stripping away key Turkish officers who had worked closely with the United States.

Comments made at Erdogan’s rally on Friday follow remarks made earlier in the day blasting four-star US General and CENTCOM commander Joseph Votel for criticizing Turkey’s  post-coup attempt purge saying "Who are you? Know your place." Erdogan went on to hint once more that the United States planned the failed government overthrow bid.

"My people know who is behind this scheme… they know who the superior intelligence behind it is, and with these statements you are revealing yourselves, you are giving yourselves away."

The remarks come at a troubling time only one day after over 5,000 protesters yelling "death to the US" marched towards NATO’s critical Incirlik Air Base which houses between 50 and 90 US tactical nuclear weapons before security officials successfully dispersed the raging demonstrators.

Last Sunday, a massive fire broke out near another key NATO base in Izmir with T24 News reporting that officials suspected “anti-American sabotage” as the cause of the blaze. The incident occurred only hours after leading pro-Erdogan Islamist newspaper Yani Safek posted the picture of another top US General, Commander of NATO’s International Security Assistance Force (ISAF) John F. Campbell, under the headline “The Man Behind the Failed Coup in Turkey.”

In the wake of the failed coup bid, Turkey’s Labor Minister Suleyman Soylu rushed for a live interview with HaberTurk to say that “the US is behind the coup” and only hours after the State Department condemned this statement as "harmful to bilateral relations" the country’s Prime Minister Binali Yildirim accused the United States of harboring alleged coup mastermind Fethullah Gulen and said Turkey would go to war with "any" country that sides with the Pennsylvania-based cleric.

As the United States relationship with Ankara in tatters forcing Washington to imagine the implications of Turkey potentially abandoning NATO, if the US isn’t forced to demand their eviction before that, US General Joseph Dunford, the Chairman of the Joint Chiefs of Staff, rushed to Ankara on Friday to attempt to quell tensions.

However, with polls before the failed coup showing that only 17% of Turks welcome the United States in the country and with the Erdogan regime’s flippant willingness to accuse Washington of plotting a coup against, festering anti-Western sentiments threaten to explode in Turkey at any time and analysts wonder if the Turkish President will, or even can, put the genie back in the bottle.