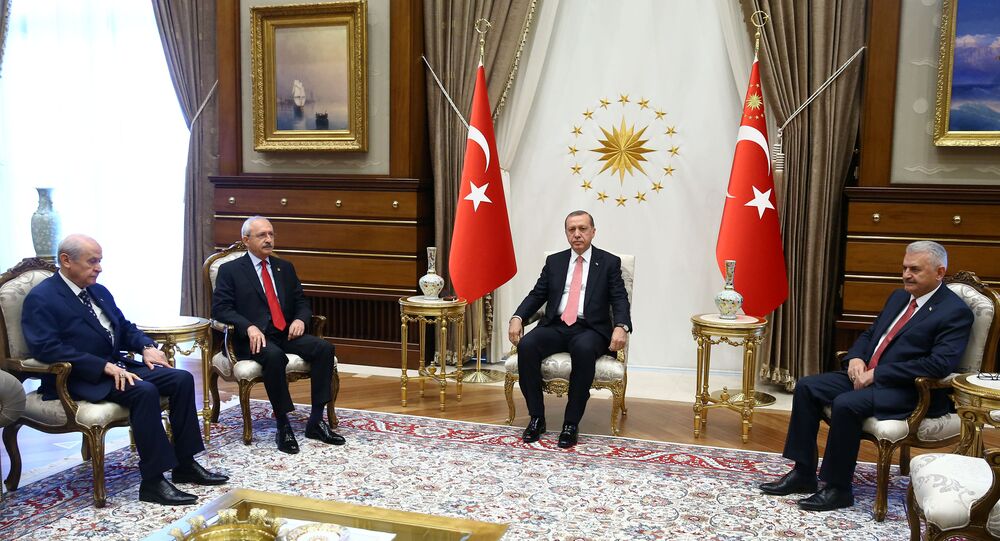 Commenting on the meeting of the Turkish president with the leaders of the Nationalist Movement Party and Republican People’s Party and his refusal to invite the leader of pro-Kurdish Peoples’ Democratic Party, politician Sezgin Tanrıkulu told Sputnik that the unresolved Kurdish issue remains a breeding ground for a new coup in the country.

The invitation by the Turkish leaders however excluded the leader of the pro-Kurdish Peoples’ Democratic Party (HDP).

The refusal to invite the Peoples’ Democratic Party (HDP) has caused uproar among the Kurdish society, he said.

“Republican People’s Party (CHP) Kemal Kılıçdaroglu has expressed our discontent with such a state of affairs to the presidential aide and the prime minister,” he said.

© AFP 2020 / Yasin Bulbul / POOL
Behind-the-Scenes Game: Why US is Forced to Maintain Good Ties With Turkey Amid Tension Over Kurds
“It was not right not to invite the HDP to the meeting where the after-coup measures were discussed,” the politician added.

Sezgin Tanrıkulu also said that everyone already understands that the policy of confrontation is not a solution to the Kurdish issue.

“The unresolved Kurdish issue and the policy focused on the use of force are breeding grounds for a new coup,” the politician added.

“All the military who violated the law in the east and southeast of the country, are under arrest. The pending solution to the issue is breeding the mentality of coupists,” warned the politician adding that the authorities instead should use the current situation to resolve the issue.

The government should resolve the issue together with the opposition, he said.

Sezgin Tanrıkulu also said that the country’s state institutions must distance themselves from being in an alliance with any individual party, a precondition for a fair and just governmental structure.