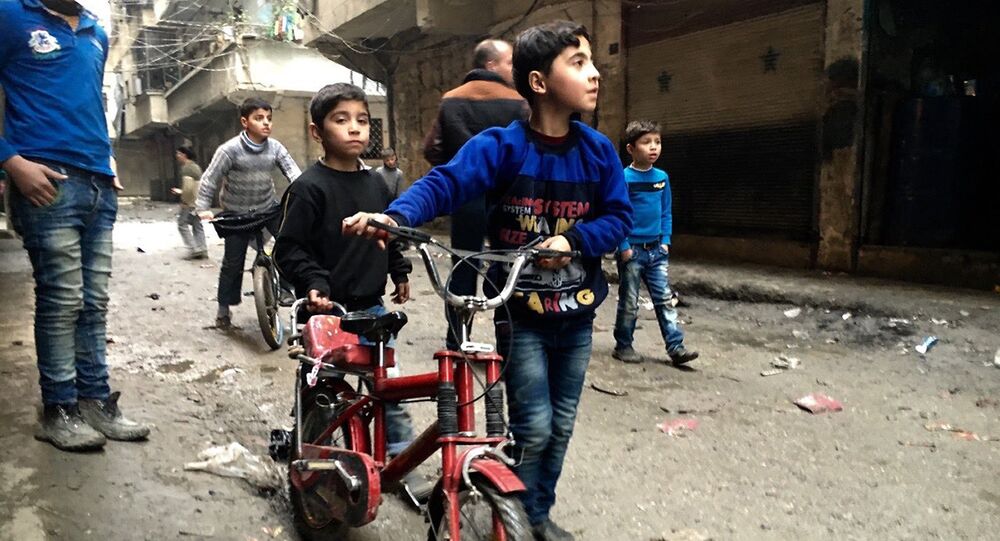 Syrian activists are taking advantage of the global Pokemon Go craze to raise awareness of the predicament of Syrian children in the country's war zones. A group of activists posted photos of Syrian children holding pictures of Pokemon characters and asking for help. Radio Sputnik spoke with Moustafa Jano, one of the activists behind the campaign.

© REUTERS / Khalil Ashawi
Germany, UNICEF Give 500,000 Syrian, Mideast Children Access to School
He further said that he is a graphic designer so he had an idea. “I tried to make some pictures about our suffering in Syria. Many people are being killed in my country as we speak. So we have this message to send to the world to show people what a miserable life people in Syria are living.”

A series of photos posted to social media shows Syrian children holding drawings of characters from the Pokemon Go augmented reality mobile phone game along with their locations and the appeal “come save me.”

Syrian children holding Pokemon photos in hopes the world will find them and save them pic.twitter.com/zRmZybjYbo

​​The message behind the campaign seems to be: if you can spend so much time chasing imaginary creatures then why can't you do more for children growing up in war.

The images were widely circulated on social media in recent days.

Talking about his campaign, Jano said that he made these drawings as an amateur, not a professional.

“I made these drawings as an amateur because I am living in the refugee camp in Sweden, waiting for my residency and permission to stay. So I am just making some pictures and people are reacting to my designs,” the activist said.

He further said that he hopes people understand that while they are playing this game, in another part of the world children, poor people are being killed for nothing.

The estimates of the death toll from Syria's six years of war range from 250,000 to 470,000. Almost half of Syria's pre-war population of 23 million has been displaced by the war.