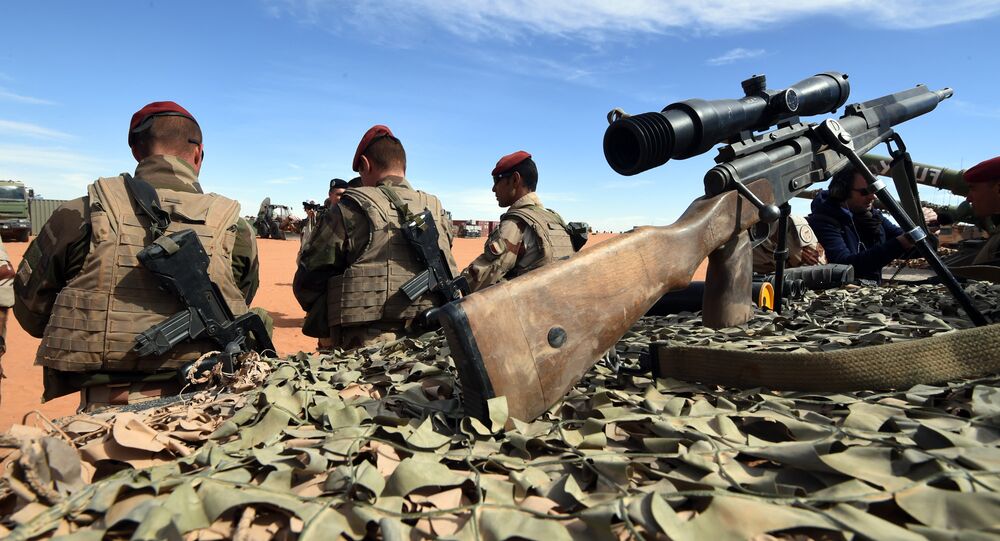 By confirming the death of its three servicemen in Libya, France has admitted the presence of its special forces on the ground in the country; earlier the Pentagon also confirmed its presence on the ground in Syria. Chris Nineham from the Stop the War Coalition says that the majority of such operations are carried out without any UN authorization.

© AP Photo / Manu Brabo
Three French Officers Confirmed Dead in Libya - Defense Ministry
On Wednesday French government spokesman Stephane Le Foll confirmed the deaths of three French soldiers who were on an intelligence-gathering mission in Libya and died in a helicopter crash near Benghazi, thus admitting the presence of its special forces on the ground in the North African country.

"The special forces are there, of course, to help ensure that France is present everywhere in the fight against terrorists," Le Foll explained in an interview with the radio station France Info.

Reports suggest that following the Daesh takeover of Libya’s coastal city of Sirte in late 2015, the United Kingdom and Italy have also sent special forces to Libya.

The Government of National Accord (GNA), Libya's internationally-recognized ruling coalition, condemned the French intervention in a statement released on Wednesday evening, demanding an explanation from Paris and saying that it would not compromise on Libyan sovereignty.

The statement posted on the government’s Facebook page said that “nothing justifies an intervention without our knowledge and without it being coordinated with us.”

© AP Photo / Riccardo De Luca
UN Security Council Must Lift Libyan Arms Embargo to Support Counterterrorism
"The Presidential Council expresses its deep discontent at the French presence in eastern Libya without coordination with the Council, which was declared by the government of France," it stated.

The Benghazi Defense Brigades, the militant group that claimed responsibility for the downing of the helicopter, said 13 of its fighters were killed in what it described as French retaliatory airstrikes in western Benghazi. France denied that its warplanes over Libya were used for any missions but reconnaissance.

US and French special forces are reportedly operating in the country, but the reports have not been officially confirmed until now.

The Middle East Eye (MEE), an online news portal which covers the events in the Middle East, has obtained air traffic control recordings which suggest that British, French, Italian and US forces have been coordinating air strikes in support of Libyan General Khalifa Haftar, head of the armed forces based in Libya's east.

The commander, however, doesn't officially serve the UN-recognized government and is in no position to seek military aid from foreign powers.

The leaked tapes appear to confirm earlier reports suggesting the existence of an international operations center that is helping General Khalifa Haftar in his campaign to gain control of eastern Libya from groups he has declared to be “extremists.”

© AFP 2021 / Stefan Rousseau
Blair 'Almost Semi-Broken' in Wake of Iraq, Libya Legacies
Earlier in May, the Pentagon confirmed that one service member, probably a special operations soldier, was hit by “indirect fire” such as a rocket or mortar strike while operating north of the Syrian city of Raqqa, the de facto capital of Daesh's self-proclaimed Islamic State.

Another soldier was also hit by indirect fire outside Irbil, a city in the Iraqi region of Kurdistan.

The announcement came as the first official recognition of a US service member being wounded in Syria. However, according to publicly available data from the Pentagon, there have been 14 service members wounded in Iraq and Syria since the start of the US-led mission there in 2014.

The problem with such clandestine interventions is that they often disregard the law and have no public oversight, Stop the War Coalition’s Chris Nineham told RT.

“They are not backed by the UN, these interventions. They are not checked anywhere. They are just unilateral acts of military aggression,” he added.

Chris Nineham earlier also commented on the UK’s participation in the US-led coalition airstrikes in Syria when it was revealed after a freedom of information request by the campaign group Reprieve that around 20 British military personnel have been embedded within coalition forces in the country.

The coalition then claimed that Syria has consequently "turned out to be David Cameron’s secret war."

Chris Nineham reiterated these concerns, and condemned “the historical instinct to dominate the Middle East which Cameron, Michael Fallon and others plainly demonstrate,” according to a statement on the Coalition’s website.

Meanwhile Pentagon keeps reiterating that its service members were not “engaged in active combat” and were behind the lines operating in advisory roles when they came under fire.