Several days have passed since the failure of the attempted military coup in Turkey, and it's becoming obvious that the consequences of the failed plot will have very serious and detrimental effects for the Turkish polity and society, writes Inosmi.ru columnist Dmitri Dobrov.

Metin Munir, a veteran Turkish journalist from the internet news portal T24, wrote about the failed coup attempt as follows: "Erdogan is saved, but Turkey is going under."

For his part, in an analysis published by RIA Novosti, Dmitri Dobrov warned that what Turkey may be witnessing today "is the end of Kemalist Turkey, where the army had been the guarantor of secularist principles and democracy, even if only in the conditional sense. What will happen to the country following this event is hard to say, but democracy is definitely set to suffer for it."

© CC BY 2.0 / Wikileaks Mobile Information Collection Unit / Wikileaks Truck
WikiLeaks Publishes Internal Emails of Turkish Ruling Political Party AKP
President Erdogan, for his part, called the attempted coup a "gift from God." For his critics, Dobrov suggested, it is "an opportunity to 'take care' of opposition from both the right and the left – from supporters of liberal civil society, to the pro-Kurdish parties.  It's no wonder that the world's press has begun to speculate that Erdogan may have deliberately staged the coup to consolidate his power."

For now, the journalist recalled, it remains unclear what exactly motivated the officers to stage the abortive coup. "Although Erdogan himself had alleged that they were motivated by Islamic preacher Fethullah Gulen, it's also possible that they acted on the principle of protecting the Kemalist tradition – which sees the army as the guarantor of Turkey's secular order. It's quite possible that they had patriotic intentions." 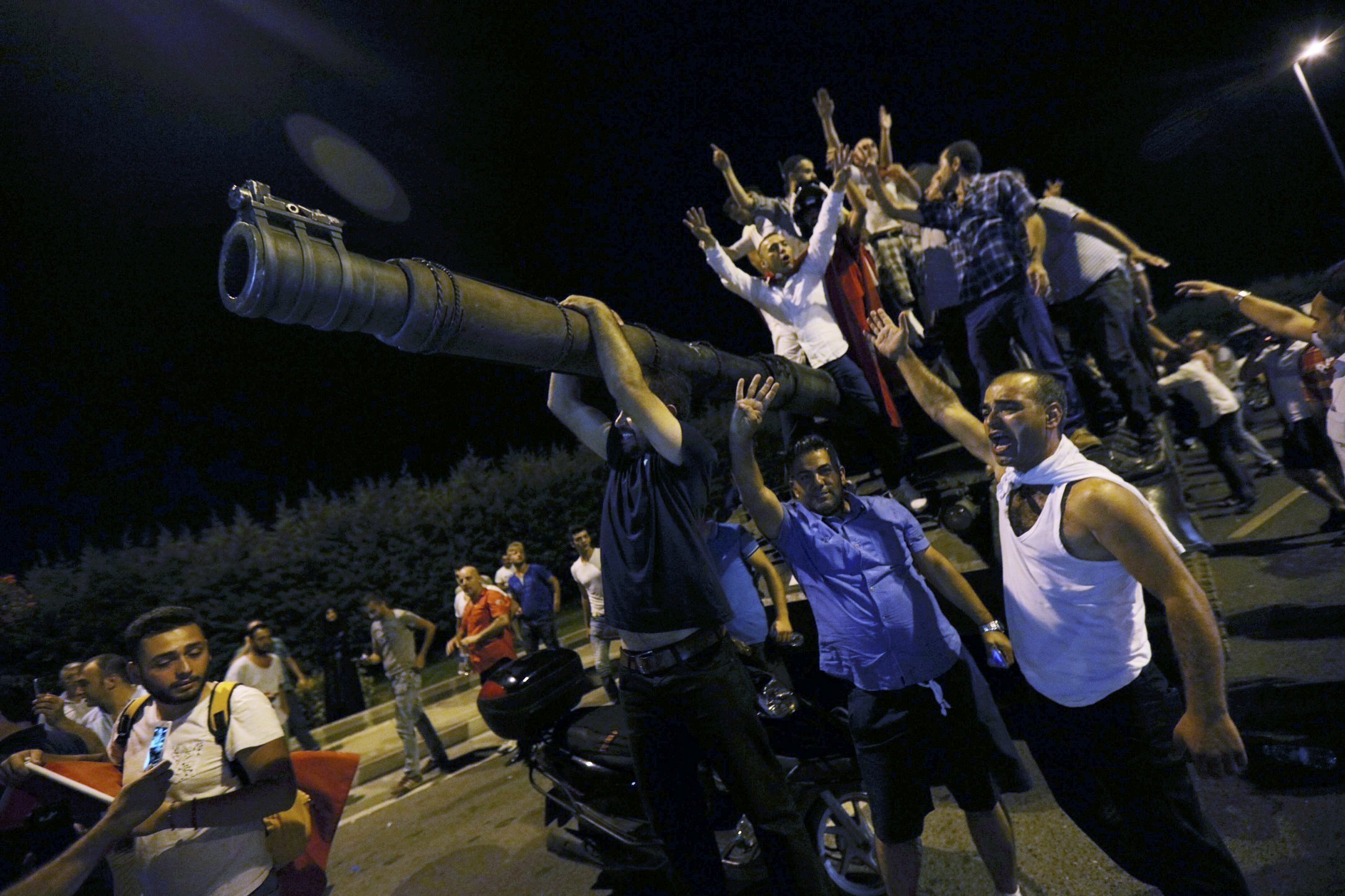 According to Cumhuriyet political commentator Ahmet Insel, the putchists sought to enlist the support of that half of Turkish society which is concerned with Erdogan's authoritarian leadership style. However, no one came out to the streets to support the military; what's more, only part of the army joined the putchists; the mass dismissals and trials Erdogan had conducted in recent years seem to have done their part in demoralizing the officer corps.

A day after the coup's failure, Erdogan's government began a massive purge of the military, the judiciary and the executive. Officers were arrested en masse; about 3,000 prosecutors and judges were suspended; the wave of arrests has struck every public figure who has ever found themselves on the wrong side of Erdogan, from supporters of Fethullah Gulen to opposition parties and journalists to the country's Kurdish population.

"Erdogan's goal," Dobrov warned, "is the creation of an authoritarian presidential republic in which all branches of government, all defense and law enforcement agencies are subject to him personally. Most likely, he will now be able to achieve this goal."

© REUTERS / Osman Orsal
Big Political Changes Await Turkey, Now That It's Escaped the Coup
At the same time, the journalist added, it is doubtful whether one man can actually reshape such a country so large and complex as Turkey as he sees fit.

Ultimately, "the status of Turkish society is such that it will be practically impossible for Erdgoan to resolve all the outstanding ethno-religious, economic and political contradictions. He is likely to face either another military coup, or a civil war between his supporters and the Kurds, together with all the forces favoring the preservation and strengthening of civil society (students, businessmen, other ethnic minorities, etc.)."

© REUTERS / Rodi Said
Kurdish people carry flags as they march during a protest in the city of al-Derbasiyah, on the Syrian-Turkish border, against what the protesters said were the operations launched in Turkey by government security forces against the Kurds, February 9, 2016

Today's Turkey, Dobrov wrote, is in a very difficult ethno-confessional situation. "In the early 1920s, Mustafa Kemal Ataturk literally molded Turkey together from the remnants of the disintegrating Ottoman Empire; his country, according to the leaders of the Entente and the authors of the Sykes-Picot Protocol, was not supposed to survive. Ataturk's personal courage, the patriotism of Anatolian peasants and support from Soviet Russia helped to preserve Turkey in its present borders. But even then, ethnic Turks comprised less than half of the population." The de facto majority was formed by other groups, including the Kurds, Armenians, Greeks, Bulgarians, Circassians, etc.

© Sputnik / STR
Hell Hath No Fury Like a Teflon Sultan
"Through a colossal campaign of ethnic cleansing (which saw the deportation of 2 million Greeks, and the expulsion of the Armenians, Bulgarians, and in part, the Kurds), Ataturk managed to create a state where Muslim Turks comprised a little more than half the population. Everyone else was listed as 'Turks' – the remaining Armenians, Greeks, Bosnians, Circassians, Crimean Tatars, and even the Kurds, who came to be called 'Mountain Turks'."

"However," the journalist recalled, "many of these national groups nonetheless managed to preserve their ethnic identity, first and foremost the Kurds, who are estimated to account for 20-25% of Turkey's population (or 16-20 million people). Even higher estimates exist, but Turkish authorities have worked to conceal the statistics."

"Even this percentage is enough to blow up the country from the inside. Turkey's leaders, starting with Ataturk, refused to recognize the Kurds' rights even to cultural autonomy. The conflict, whether concealed or in an open armed phase, has been waged for over 90 years."

In this situation, Dobrov explained, the fact that President Erdogan has attempted to create a unitary government comprised of 'Muslim Turks', has led to a smoldering conflict among different layers of Turkish society.

Finally, "the demographic factor too has played a special role in exacerbating existing problems. Over the last 25 years, Turkey's population has increased from 50 million to nearly 80 million people. The source of high birth rates is the internal regions of Anatolia, where the population adheres to the traditional lifestyle professed by conservative Islam; such families have many children. It is these people, with their rural ways of thinking, who form the basis of the electorate voting for Erdogan and his Justice and Development Party. But in Istanbul, Izmir, the tourist cities and industrial centers, not to mention Turkish Kurdistan, Erdogan's nationalist rhetoric does not find the sought-after support."

© REUTERS / Murad Sezer
Post-Coup Revelations: How a Rogue Cleric's Cabal Infiltrated the Turkish Army
"Over the past fifteen years, Turkey has made great social and economic strides; the country is at a fairly advanced stage of democratization and modernization (by Middle Eastern standards), and the old methods of authoritarian rule are no longer effective." In particular, Dobrov wrote, "the younger generation, which has grown up in the cities, considers democracy the norm and is ready to fight for it. This was shown by the mass demonstrations in 2013 in Istanbul's Taksim Square."

Unfortunately, now, "as a result of events in recent years, and particularly after the failed coup attempt, Turkey has been thrown back decades in its domestic politics; meanwhile, investors have been spooked, and the tourism industry is also in jeopardy."

"In foreign policy too, Erdogan has conducted a full-scale revision of Kemalism, staking his bets on Islamist movements in the Arab-Muslim world, including the Muslim Brotherhood in Egypt and Daesh (ISIL) in Syria and Iraq. However, this adventurism led to the destabilization of the region and rebound to hit Turkey itself, where the conflict with the Kurds escalated."

© AFP 2019 / BULENT KILIC
Tanks stationed at a Turkish army position near the Oncupinar crossing gate close to the town of Kilis, south central Turkey, fire towards the Syria border, on February 16, 2016

Prior to the coup, American political scientist David Goldman warned that Turkey is in danger of becoming the next 'failed state' in the Middle East. He based his prediction on an analysis of the tragic mistakes made by the ruling Justice and Development Party and by Recep Tayyip Erdogan personally.

For his part, Dobrov warned, "military analysts and officials from intelligence services also believe that in the medium term, Turkey may not continue to exist in its present borders, with Kurdish separatism threatening to launch the mechanism of collapse."

Ultimately, the journalist suggested, "the current consolidation of power after the failure of the military coup will provide only a small respite for the Erdogan government from a historical perspective."

Council of Europe Alarmed by Torture, Hate Crimes in Turkey After Coup

No Drive to Fight: How a Rogue Cleric's Cabal Infiltrated the Turkish Army