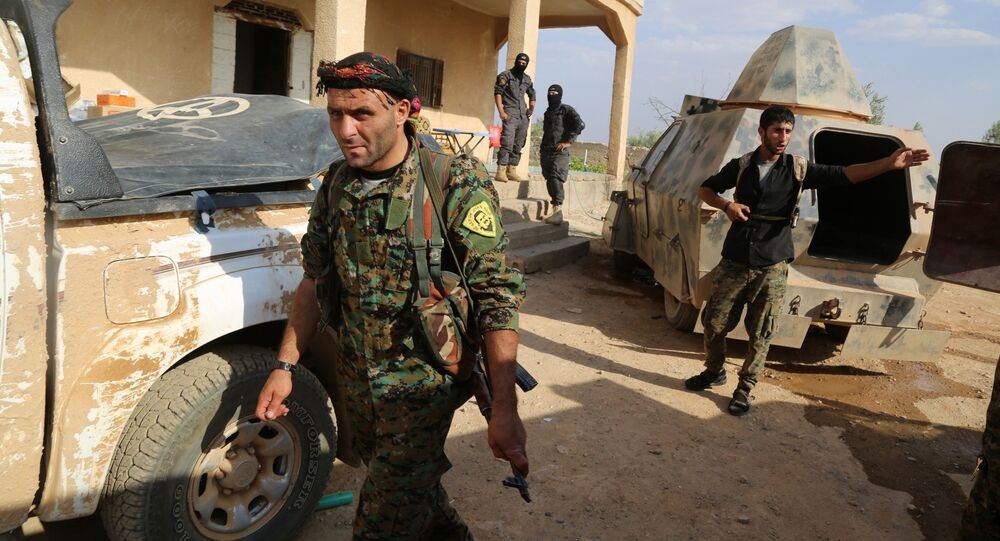 “Manbij will be liberated in a short while. After the liberation it will be integrated into the Rojava — Northern Syria Democratic Federal System,” Hediye Yusuf told Sputnik Turkiye.

© REUTERS / Rodi Said
US-Backed Forces Capture Daesh Syria Headquarters at Hospital in Manbji
“Several members of the city Mejlis (city council) have already joined the Constituent Assembly of the Federation. Many Arabs, Turkmens and Kurds from Manbij are already members of our Mejlis. It is for the people of Manbij to decide when to join the Federation. The city Mejlis will apply to join the Federal System based on the decision of the people of Manbij,” she added.

Hediye Yusuf also noted that the fighting is getting more and more intense as troops advance to the center of the city. She added that with this operation, 90% of the Daesh presence in Rojava-Northern Syria will end and peoples of different faiths and ethnicities will find comfort in the Rojava-Northern Syria Federation.

Also, it will lay the groundwork for the unification of Afrin and Kobane cantons.

Rojava is the Kurdish name for northern Syria.

Meanwhile, on Tuesday, US Central Command’s Combined Joint Task Force announced in a press release that Syrian Arab Coalition forces backed by US airpower had captured the local Daesh headquarters in Manbij.

"The Daesh [Islamic State] headquarters, located in a hospital, was being used as a command center and logistics hub," the release explained.

"The SAC [Syrian Arab Coalition] also seized a significant amount of the city during the operation, which provided civilians with the opportunity to escape."

© AFP 2020 / DELIL SOULEIMAN
An Islamic State (IS) group flag is seen on a road in the jihadist's group bastion of Manbij, in northern Syria (File)

The capture was preceded by more than 450 coalition airstrikes in and near the mid-sized city close to the Turkish border, according to the release.

However a local source told Sputnik on Tuesday that over 100 Syrian civilians have been killed in US-led coalition airstrikes against Daesh near the city of Manbij.

The strike was carried out on Tuesday morning and women and children were among the victims, the source said.