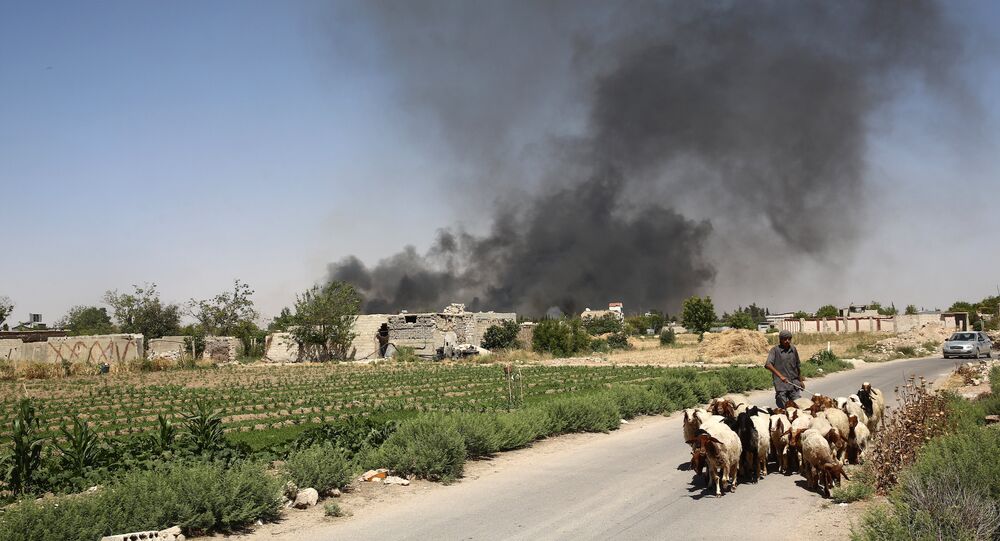 Interim Deputy Director of the Middle East and North Africa Programme at Amnesty International Magdalena Mughrabi stated that the United States should do everything possible to avoid or at least minimize civilian casualties.

© REUTERS / Rodi Said
US-Led Coalition Airstrike Kills Over 100 Civilians in Aleppo Province - Source
MOSCOW (Sputnik) — The rights watchdog urged on Tuesday the US-led coalition forces, which are carrying out airstrikes in Syria, to redouble their efforts to prevent civilian deaths amid the recent reports of many men, women and children being killed in the airstrikes.

Earlier in the day, a local source told Sputnik that over 100 Syrian civilians have been killed in US-led coalition airstrikes against the Islamic State (ISIL or Daesh) terrorist group near the city of Manbij in the Aleppo governorate. The strike was carried out on Tuesday morning, with women and children among the victims, the source said.

"International humanitarian law requires all parties to a conflict to prevent the needless loss of civilian life. Even if the coalition forces believed that fighters from the armed group calling itself Islamic State were present around al-Tukhar, they should have taken the necessary precaution to identify who else was present to avoid or at least minimize civilian casualties," interim Deputy Director of the Middle East and North Africa Programme at Amnesty International Magdalena Mughrabi was cited in the statement.

"There must be a prompt, independent and transparent investigation to determine what happened, who was responsible, and how to avoid further needles loss of civilian life. Anyone responsible for violations of international humanitarian law must be brought to justice and victims and their families should receive full reparation," Mugrabi was cited as saying.

Syria has been mired in civil war since 2011, with government forces loyal to Syrian President Bashar Assad fighting numerous opposition factions and extremist groups. The Daesh, which is a militant jihadist organization outlawed in many countries, including Russia and the United States, overran large areas of Syria and Iraq in 2014.