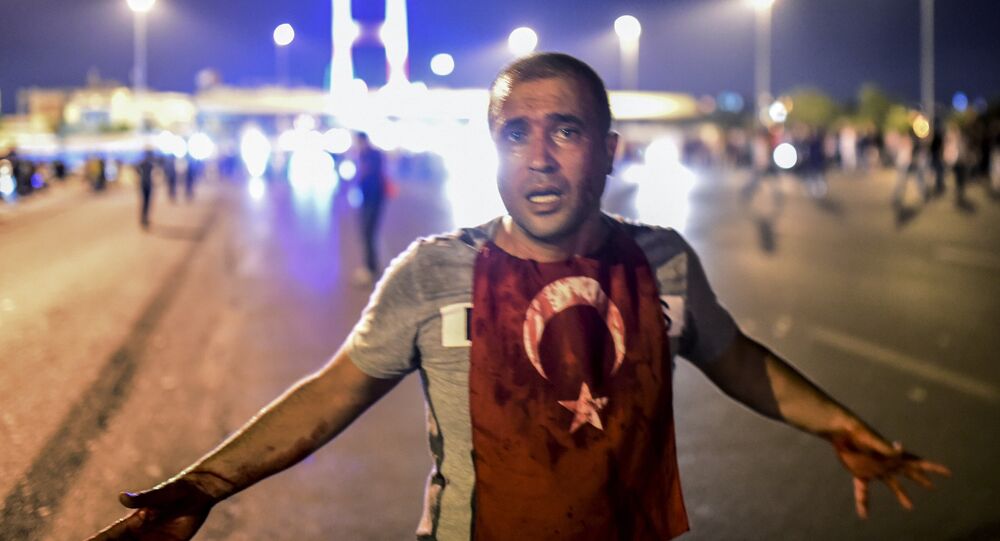 Commenting on the recent coup in Turkey, Dr. Bernd Liedtke, a German expert on the country, and Polish politician Andrzej Zapałowski told Sputnik that it might have been a staged event which President Erdogan might use as a bold attempt to expedite changes to the country’s constitution and pave the way for the further Islamization of the country.

He noted that previous coups in the country had been very well-planned and worked well. However, this one had somehow failed.

“The way the [Turkish] president is responding to the coup, by removing thousands of judges and prosecutors from the judiciary system and bringing the death penalty back, speaks of some hidden agenda,” he told Sputnik Deutschland.

The expert recounts that Recep Tayyip Erdogan had actually wanted to change the country’s constitution but failed due to the lack of a parliamentary majority.

“Thus he makes use of this, in order to change the constitution of 1982 and to pass on his own autocratic idea of the governmental system. And he is going to do it now,” Dr. Liedtke said.

The expert noted that already-strained relations between the EU and Ankara are poised to deteriorate even further as the possible reintroduction of the death penalty in Turkey has caused concerns within the European block.

“Those in the European Union who were not only against Turkey’s accession into the EU but also criticized the mere idea of Turkey’s candidacy for EU membership, now have the upper hand and will certainly use the debates on the reintroduction of the death penalty to strip Turkey of its status as a candidate for full membership,” he said.

© REUTERS / Murad Sezer
Over 9,300 People Under Investigation After Turkey Military Coup Attempt
Dr. Liedtke added that he regretted the prospects for such a development as the EU and Turkey are strongly connected with each other politically and economically. The two countries are also interconnected at the human level: over three million ethnic Turks reside in Germany.

The expert also commented on the post-coup situation at the US base of Incirlik, which he called very dangerous:

“The army of one of NATO's member states has temporarily gone out of control. As a military alliance, NATO has not allowed or otherwise tolerated it,” he said, adding, however, that it won’t lead to Turkey’s exit from the alliance.

Dr. Liedtke noted that Erdogan’s victory over the coup's masterminds will become a tactical defeat for Turkish democracy.

"Turkey's democracy is a defective democracy, and now it will suffer more, so there will be no more talks of any democracy at all," the expert concluded.

© REUTERS / Eurokinissi/Panagiota Tsikaki
Turkish Intelligence Knew Military Coup Would be Carried Out in Advance
This view is echoed by Polish politician and chairman of the regional department of the Polish geopolitical society Andrzej Zapałowski, who told Sputnik Polska about the extremely amateurish character of the coup attempt.

“The coup plotters had the opportunity to liquidate President Erdogan during his flight, but they didn't do it,” Zapałowski told Sputnik.

“What we have probably witnessed might have been a staged coup planned by the Turkish president for the purpose of strengthening his authority and getting rid of his adversaries within the military circles who traditionally support the idea of a secular state, he added.

The Turkish leader, meanwhile, has always pursued the idea of an Islamic Turkey, the politician added.

The event will have far-reaching consequences, first of all, for the EU. The violations of the EU standards might lead to a conflict between the block and Turkey.

Secondly, the question arises whether Turkey might open new immigration routes for tens or even hundreds of illegal immigrants into the EU, he added.

© AFP 2021 / ADEM ALTAN
Life Term: Erdogan Needs to Stay in Power to Avoid Criminal Charges
Another thing is Turkey’s status within NATO. Turkey has the second largest army in the alliance after the US, and if the country undergoes Islamization, it will only complicate the situation in the Middle East, Zapałowski noted.

He also pointed out that the Turkish president advocated military interference into the Syrian conflict, while the country’s military were against the move, fearing it might escalate the conflict.

Hence, he says, the coup attempt in the country was very dangerous for developments in the Middle East, especially with regards to the fight between Turkey, Saudi Arabia and Iran for leadership in the region.

Coup Attempts & Sultanates: EU in Disarray Over What to Do Next in Turkey