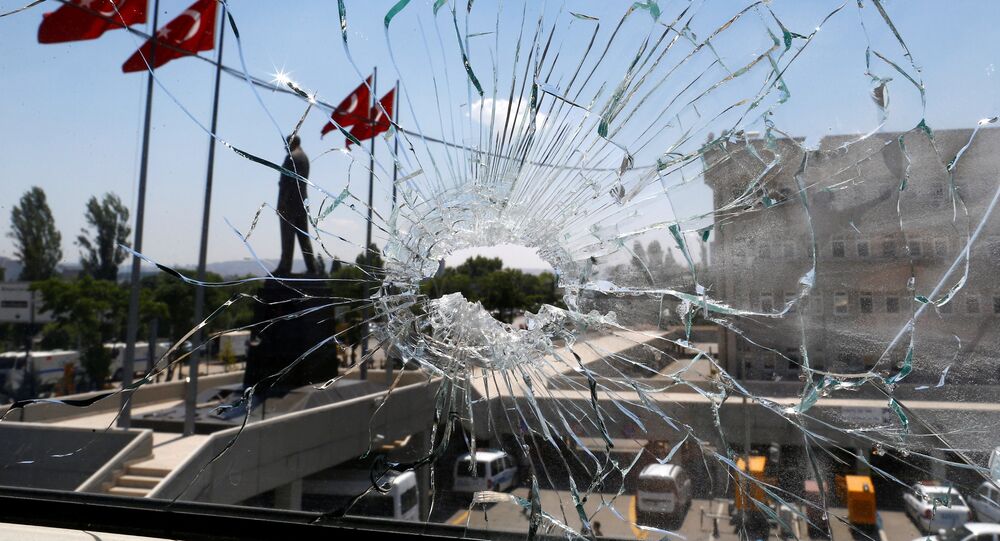 It took less than a day for an attempted military coup in Turkey to end in failure late last week, but it is destined to have far-reaching effects on the country's political landscape in the immediate future.

© REUTERS / Alkis Konstantinidis
What's Behind Turkey Accusing Its NATO Ally of Links to Failed Coup
The failed coup attempt in Turkey will almost certainly change the balance of power in the country and affect its position on  the international arena.

First and foremost, the coup helped Turkish President Recep Tayyip Erdogan to fulfill what Gumer Isayev, a political science professor at St. Petersburg State University, called "one of the largest purges in the Turkish army."

Isayev, who is head of the St. Petersburg-based Center for Modern Middle East Studies, told RT that the arrests pertain to not only those military units that were involved in the coup; according to the latest data, the number of arrested generals already stands at 100, he said, adding that there a total of 400 generals in Turkey.

"Apparently, the army will be shuffled substantially, in what can be seen as a sign of difficult relations between the government and the army as an institution. According to Erdogan, the coup will enable him to crack down on the military," Isayev said.

He was echoed by Semyon Bagdasarov, head of the Center for Middle East and Central Asia Studies, who said in an interview with RT that the clampdown "will be the largest army purge in Turkey's history."

He recalled that in particular, the purge is related to the General Staff, the Air Force and those at the helm of the Second and Third field armies. As for the Second Army, it is currently fighting the people's self-defense forces of the Kurdistan Workers' Party (PKK) in southeastern Turkey.

"The most well-trained staff — generals and colonels — will be punished, and in cases where the death penalty is used — hanged. This will lead to a sharp decline in the combat capability of the Turkish army, which will certainly play into hands of the PKK's self-defense forces," he said.

© REUTERS / Murad Sezer
Death Toll Rises to 265 from Failed Military Coup in Turkey
Bagdasarov added that Syrian President Bashar Assad may also benefit from the failed coup in Turkey because Ankara will most likely reduce significantly its assistance to "terrorist groups and other structures in Syria."

Isayev, for his part, said Erdogan is ready to face Turkey's fading military clout in the region in order to achieve full control over the army.

"Given the experience of the Middle East conflicts, the color revolutions and coups, for those who fought the army as an institution, internal political problems had always been a priority," he said.

Isayev also said that the failed coup will further add to Erdogan pushing for a presidential system of government in Turkey, something that he said one of Erdogan's "political ambitions."

"He can seize the opportunity now that the country is still in shock after the failed coup. Even the opposition forces will not interfere with this, because any criticism of Erdogan will be perceived as an indirect help to those who staged the coup," according to Isayev.

He added that it will be necessary for the government to comply with certain formalities and procedures when it takes the bold step of amending the country's constitution to give more powers to Erdogan.

"But the mood of the population has already changed, and people will be prepared for such upheavals," he pointed out.

As far as Turkey's relations with Russia are concerned, most experts have said that the failed coup will further contribute to the normalization of bilateral ties, with Isayev remaining cautiously optimistic about the matter.

"It seems that the main phase of normalization is already behind us and the failed coup will unlikely change drastically the current nature of Russian-Turkish relations," he said.

He was echoed by Bagdasarov, who said that despite the resumption of several bilateral economic projects, "changes in bilateral relations will be purely cosmetic in nature."

Meanwhile, many in Europe have already lashed out at Erdogan's clampdown on the army and the opposition, as well as his drive to introduce capital punishment in Turkey.

"Currently, Europe is at least paying lip-service to the purge of the opposition in Turkey," Isayev said, also citing the EU's concerns about the Turkish anti-terrorist legislation and the arrest of judges in the country.

Bagdasarov in turn said that despite the criticism, the EU is unlikely to back away from Turkey, given the ongoing migration crisis.  According to him, Europeans have yet to find an alternative to Turkey's assistance as far as migrants are concerned.

© AP Photo / Susan Walsh
Did Turkey Just Threaten War Against the United States After Failed Coup?
"Europeans cannot completely abandon Turkey. But they will continue to support the Syrian Kurds and thus undermine Turkey," he said.

On the US-Turkey cooperation, Bagdasarov said that despite his frustration over Washington's policy on Turkey, Erdogan will never break off relations with the United States.

"Erdogan may show anti-Americanism by limiting the use of the Incirlik base and making some stern statements. But he will never let Turkey withdraw from NATO, which will shield Ankara in the event that Turkey has a conflict with a  certain country, and Erdogan will never agree to sever ties with the US," he said.