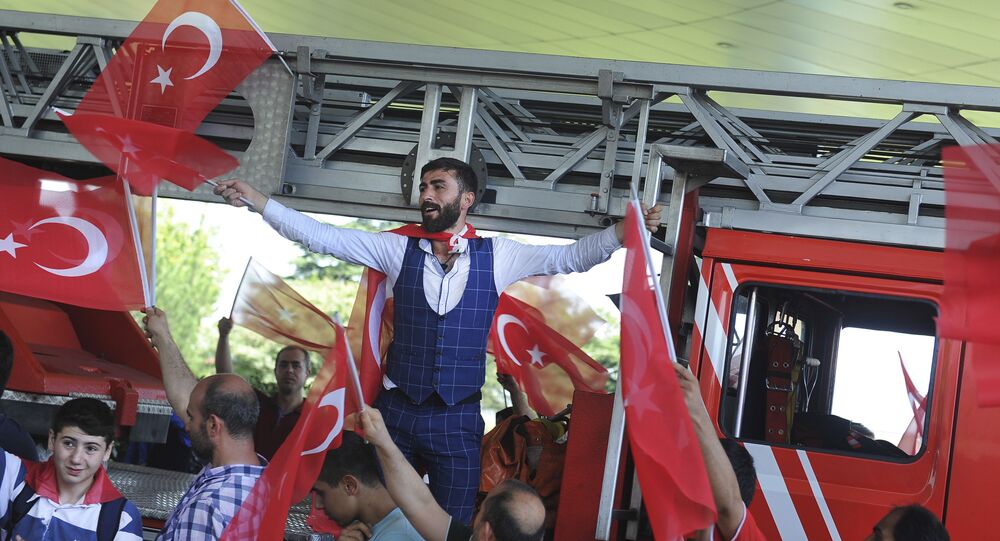 The growing instability as well as the domestic policy of Recep Tayyip Erdogan were among the main factors behind the recent military coup attempt in Turkey. At the same time, the military has always played an important role in the Turkish politics.

On Friday, member of Turkey's armed forces attempted to stage a coup in the country. Over 180 people were killed and 1,470 were injured during the events, while nearly 3,000 people have already been detained, according to the Turkish government.

The reasons behind the attempted coup are a power struggle, the spread of terrorism and the growing autocracy of the Turkish leader, an article in the Norwegian newspaper Aftenposten read.

"None of Erdogan’s predecessors of the same political caliber has resigned via democratic procedures. They either died or were toppled during a coup," Einar Wigen, a specialist in Turkish affairs at Oslo University, said.

© REUTERS / Murad Sezer
Death Toll Rises to 265 from Failed Military Coup in Turkey
According to the expert, the domestic situation in Turkey has been gradually deteriorating in recent years.

The situation in Turkey has long been unstable and unpredictable. Wigen listed four conditions for such a state of affairs.

First, Turkey borders Syria in the south. There is a war going on in Syria. Over 2.7 million Syrian refugees are currently in Turkey. Before Ankara and the European Union reached a deal on the migrant situation Turkey was a transit country for millions of migrants coming to Europe.

Second, members of Daesh are active in Turkey. There are also other terrorist groups that are reportedly affiliated with al-Qaeda. In recent years, Turkey has seen a series of terrorist attacks, including in major cities such as Ankara and Istanbul.

© REUTERS / REUTERS
Why Turkish Intelligence Agency Failed to Uncover Coup Plot
Moreover, last summer the Turkish government launched an offensive in Kurdish regions. Since then, those regions have lived in a state on the brink of civil war.

Finally, Erdogan is conducting an increasingly authoritarian domestic policy. Particularly, he established partial control over the juridical system. He also granted additional powers to police and intelligence. He is also known for a crackdown on freedom of speech in Turkey.

"If this coup doesn’t result in Erdogan’s resignation Turkey will turn even more authoritarian. It is possible that Erdogan will grab more power," Wigen suggested.

Active involvement of the military in political processes has been part of Turkish history. In the 2000s, Erdogan announced the reforming of relations between the military and civic institutions. Under his political course, the military did not dictate its policy to the government.

© REUTERS / Kayhan Ozer
Turkish President Tayyip Erdogan (C) gets a briefing from Chief of Staff General Hulusi Akar (R) during his visit to the Gendarmerie Commando Special Forces headquarters in Ankara, Turkey, in this February 16, 2016

Here is a brief history of military coups in the Republic of Turkey.

© REUTERS / Umit Bektas
Erdogan’s Conundrum: What Could Trigger Military Coup in Turkey
The first military coup in Turkey in the 20th century took place in May 1960. At the time the Democratic Party ruled the country. The government was led by Prime Minister Adnan Menderes. Turkish intellectuals and military were discontent with the growing level of corruption in the government. In response, the government turned to repressions, including jailing opposition activists.

In May 1960, the military joined mass protests. The coup was led by General Cemal Gürsel. Menderes was toppled and the military arrested the ruling elite of the Democratic Party.

He was hanged by the military after the coup, along with two other cabinet members, Fatin Rüştü Zorlu and Hasan Polatkan. He was the last Turkish political leader to be executed after a military coup.

In March 1971, Turkey saw its second military coup. An economic recession sparked a wave of social unrest marked by street demonstrations, labor strikes and political assassinations. The military was discontent with the policy of Prime Minister Suleiman Demirel and demanded the creation of a new government to stop chaos and carry out reforms.

© REUTERS / Murad Sezer
Three Turkish Top Military Men Taken Hostage by Coup Perpetrators Released - Defense Minister
The military delivered a memorandum to the government on March 12, 1971, so the 1971 coup is known as the "coup by memorandum."

Demirel rejected the memorandum and resigned. However the parliament was not dissolved. The new government made a number of constitutional amendments, including restricting the freedom of press and labor unions as well as strengthening military involvement in politics.

In the next nine years, Turkey saw 11 new cabinets, including three led by Demirel.

The next military coup was staged in 1980. On September 12, the National Security Council led by General Staff General Kenan Evren declared a coup on the national TV channel.

The government of Demirel was abolished, the constitution was suspended, and martial law was declared across the country. Political parties and labor union were prohibited.

On a referendum on November 7, 1982, a new constitution was adopted. Two days after, Kenan Evren was elected president and was in power until 1989.

After the coup, many activists of leftist and right movements were tried in accordance with the military law. Some 230,000 were convicted, 14,000 were stripped of citizenship.

© REUTERS / Yagiz Karahan
No Happy End in Sight? 'Turkey Won't See Any Stability in Near Future'
On February 28, 1997, the Turkish military leadership issued a memorandum at a National Security Council meeting. The memorandum was aimed at observing the principles of Mustafa Kemal Ataturk, the founder of the Republic of Turkey, including the secular nature of the Turkish state.

The document presumed the resignation of Prime Minister Necmettin Erbakan and the end of the coalition government. Erbakan was the first Islamist to take the chair of the Turkish prime minister.

At the same time, the parliament was not dissolved and the constitution was not suspended.

Erbakan’s Welfare Party was dissolved. It was succeeded by the Virtue Party. Recep Tayyip Erdogan was then a member of the party. He was given a prison sentence for inciting religious intolerance in 1998.