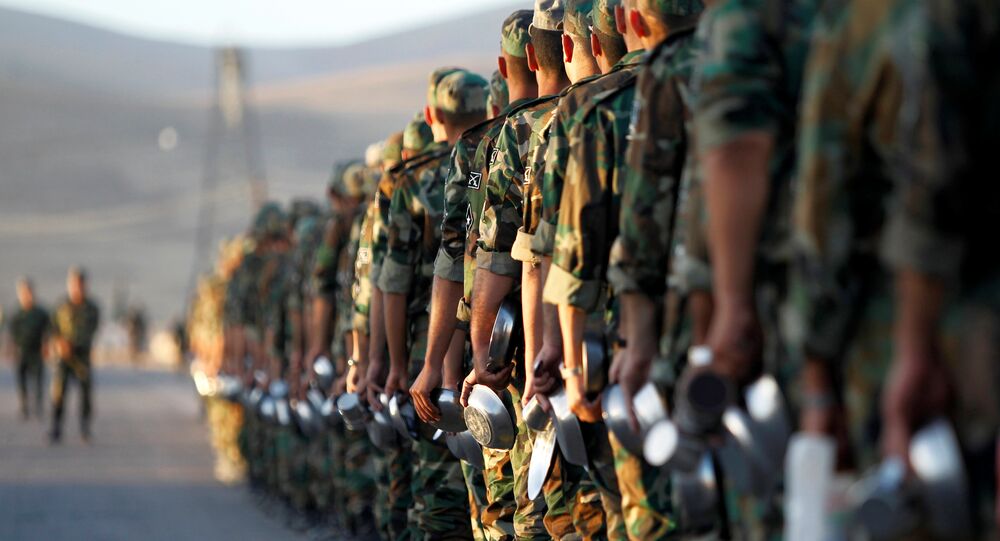 As the US-backed New Syrian Army has recently suffered two crippling defeats in Syria as the result of massive Daesh attacks on the country's borders with Jordan and Iraq, Russian military experts provide their own explanations as to why the US keeps pouring money into a group which is, evidently, unable to fight the jihadists.

US Air Force
Defeat or Maneuver? What’s Behind US Air Force Abandoning New Syrian Army on the Battlefield
On July 4, the US-backed New Syrian Army suffered another crippling defeat as a result of Daesh (ISIL/ISIS) in a massive attack at Bir Mahrutha near the Syria-Jordan border.

This is the second setback in a row the US-trained force has experienced, following quickly after it was defeated on June 28 at Al-Bukamal on the Iraqi border.

With its strength of a few hundred fighters, the New Syrian Army (NSA), a Sunni rebel group aligned with the Free Syria Army (FSA), and mainly made up of locals from Syria’s Deir ez-Zor Governorate, has received training in Jordan, as well as arms from the US and UK.

Furthermore, the US-led coalition provided air and artillery support in the above attacks; however, the reports later suggested that when the US force saw that the defeat of their protégés was imminent, they called off their jets.

Russian military experts then suggested what the real purpose behind the evidently incapable group’s operation on the ground could be.

“It is not by chance that certain information began to emerge that Washington and Arabian monarchies are using this group to [establish] control over Syria’s eastern regions,” Pavel Ivanov writes in his article for RIA Novosti.

© AFP 2021 / DELIL SOULEIMAN
What is Behind the Deployment of French Special Forces in Syria
“There are no government forces operating in this area, hence the New Syrian Army is the only force which is fighting against the radical Islamists there,” the author suggests. “Which gives all the reason to suggest that they are pursuing a clear goal.”

However, he adds, “the reality might be quite different.”

The author then cites “a circulated opinion” that the US, Saudi Arabia and Qatar are thus trying to impede in Russia’s efforts to implement a number of its gas projects, by financing and supporting the NSA.

He offers as an example the much-talked-about attempts to establish a corridor from Qatar through Saudi Arabia to Turkey and onwards to Europe for the construction of a gas pipeline which could radically change the current energy system in the region and become a major competitor to Russia’s state-owned energy company Gazprom.

The author, however, notes that there are many opponents to this suggestion who argue that such a project is very risky and economically unsound due to the lengthy military conflict on the ground.

He further suggests that there is another option: that the US and its partners simply plan to wrest Syria from both Daesh and Assad, who have become “equal-volume obstacles” for them, and to establish their own tough rules in the area: no war, no “wrong” activity in the area and “one long pipeline.”

© Sputnik / Iliya Pitalev
Is There a US-Russia Grand Bargain in Syria?
A similar point of view was earlier echoed by Anatoly Nesmiyan, a Russian military expert and blogger better known by his username el_murid. He suggested earlier in June that the Americans are now trying to create a transit corridor: not to defeat Daesh, but to ensure the transit of Iranian gas.

“In other words, the idea of two gas pipelines, which what the Syrian war is all about, is still hanging in the air: the first pipeline was to be from Qatar, Saudi Arabia, Jordan, Syria and Turkey further into Europe; the second one, known as the “Islamic Pipeline” was supposed to run Iran-Iraq-Syria and further through Mediterranean Sea into Europe,” he then explained.

The expert added that the failure of the Qatar project has not discouraged the ‘game players’ and the project might be revived, taking into account the thaw in relations with Iran and active Kurdish position.