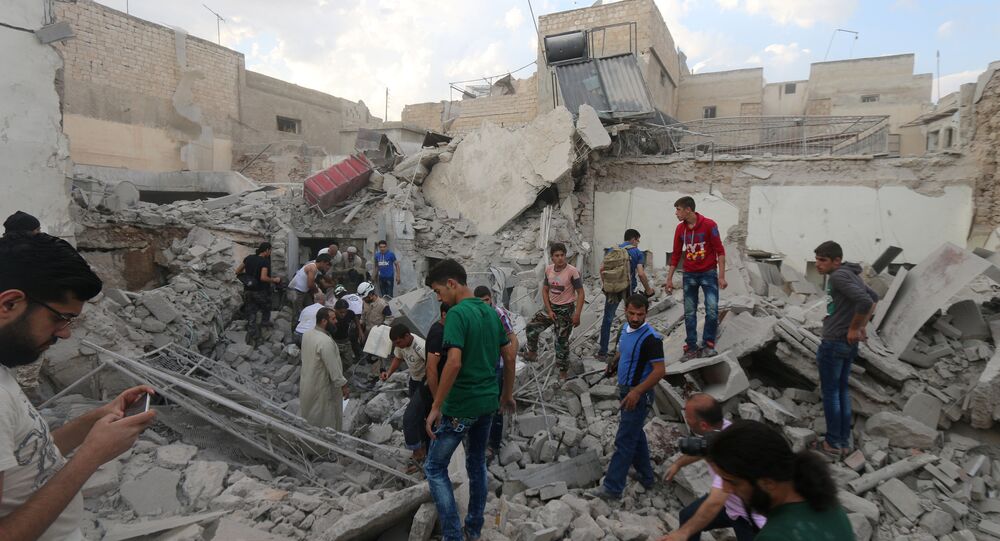 As a death toll in Syria’s Aleppo continues to rise amid intense shelling of residential areas by so-called “moderate” rebels, Damascus officials sent a letter to the United Nations, saying that the situation in the city highlights the hypocrisy of the Western nations.

Some 30 civilians, mostly women and children, were killed and 150 were injured as a result of bombings of Aleppo’s dormitories, the Russian Defense Ministry reported Saturday. The attacks were carried out by US-backed “moderates,” joined by al-Nusra Front, in the midst of 72-hour ceasefire. At the same time, the population of Aleppo, the country’s largest city, remains besieged with not enough food and fuel.

© Sputnik / Mikhail Voskresenskiy
Daesh Terrorists Shoot Down Helicopter Near Palmyra, Killing Two Russian Military Instructor Pilots
"Over the past few days, there has been no ceasefire on the ground," Al Jazeera's Zeina Khodr said. "On the ground, there is no truce and the violence continues."

By showing favor to “moderates,” such nations as France, Britain, and the US seek to topple Syrian president rather than fight against terrorism, the letter added.

The West’s position on Aleppo’s continuous massive shelling was characterized in the letter as “deep hypocrisy.” The Syrian authorities also added that regional nations including Saudi Arabia, Qatar, and Turkey facilitate terrorists, spreading “destruction and hatred.”

Aleppo has been divided in government-held and rebel-held zones since 2012, following the eruption of hostilities. At the moment, 200,000 people remain in areas under control of militants.

The conflict in Syria began in 2011, turning into full-scale war. Over 270,000 civilians have been killed since then.

Canada to Contribute to Anti-Daesh Coalition by Providing Air Surveillance