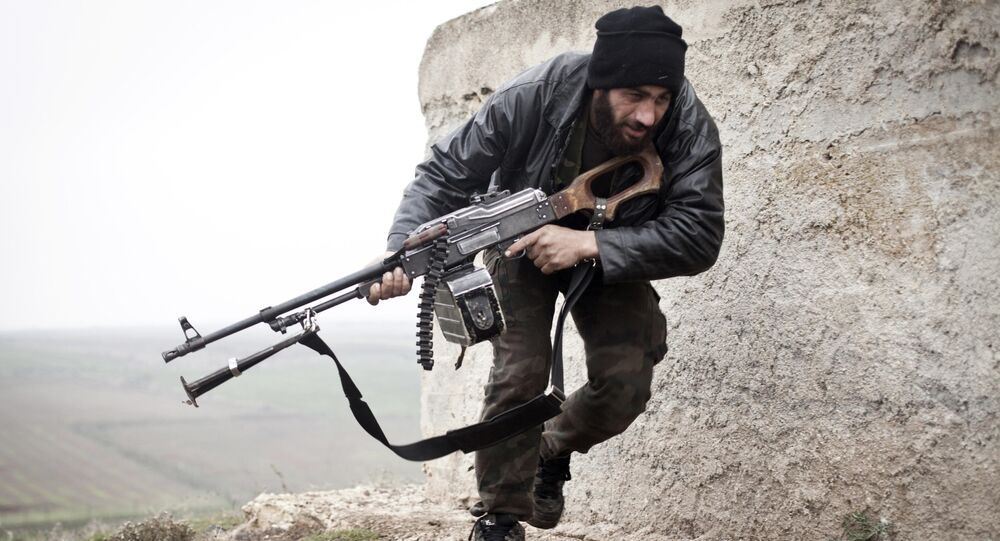 US Applies New Tactics of Fighting Daesh Terrorists in Syria

In order to defeat Daesh, US-backed opposition forces in Syria should regroup. In addition, an alliance between US-supported Arab and Kurdish forces is likely.

© AP Photo / U.S. Air Force via AP
US-Led Coalition Launches 28 Airstrikes Against Daesh in Iraq, Syria
At least 15 fighters of the US-backed New Syrian Army were killed and one was captured as a result of a powerful Daesh attack near the Syria-Jordan border.

It has been the second major defeat of US-trained rebel forces, after they were defeated outside Abu Kamal, in Deir ez-Zor. The New Syrian Army lost 40 fighters and the bulk of its weapons and ammunition. However, initially the situation was positive when New Syrian Army fighters conducted an offensive along the Syrian-Iraq border and took control over Abu Kamal and the Al-Khamdan airbase.

It was reported that the operation was conducted with the use of US and Jordanian helicopters based in Jordan. Airborne units landed from helicopters behind the enemy lines.

Similar maneuvers by the US had already been reported in northern Syria. Then, Kurdish forces were deployed by helicopters.

On July 1, editor-in-chief the website Veterans Today, Gordon Duff published an exclusive article. It read that American and British military advisers were captured by Daesh in Abu Kamal.

According to Duff, Daesh spotted the New Syrian Army march along the Syrian-Iraqi border. The terrorists prepared ambushes in the tunnels along the border and stopped the operation.

© REUTERS / Omar Sanadiki
US Lacks Bargaining Credibility With Russia After New Syrian Army Fiasco
On the one hand, it was another serious failure for the US-trained rebels. Washington has long tried to find a moderate rebel group capable of fighting Daesh.

Videos published on the Internet show that New Syrian Army members are armed with the US-made M16 rifles, M-60 machineguns, and M120 mortars.

The New Syrian Army command rebuffed rumors that the group is linked to the Syrian Democratic Forces which mainly compises Kurds. However, such an alliance may take place, an article on the Russian analytical website Svobodnaya Pressa read.

Unless the New Syrian Army can regroup soon and launch another offensive, "they will be finished," Michael Horowitz, a senior analyst at the Levantine Group security consultancy, told The Washington Post.

© AFP 2021 / DELIL SOULEIMAN
Syrian Kurds Will Get Raqqa as Reward for Being Loyal US Allies
And if it is, the US strategy will become even more reliant on Syria’s Kurds, who have proven to be an effective fighting force but are regarded with deep distrust by most of the Syrian Arabs living in areas still controlled by Daesh, he added.

Taking into account the fact that Kurds are much more capable in combat that Arabs the US may have to significantly increase the number of its military advisers or volunteers with the New Syrian Army. But Washington opposes the move.

In addition, the US also relies in the provinces of As-Suwayda and Daraa on the Southern Front, a coalition backed by Jordan and Britain.

So, on the other hand, the US' actions in Syria should not be underestimated. Despite the failed training of moderate rebels, Washington has gained ground in the Syrian Kurdistan, a territory which is unlikely to be once again under government’s control.