What first catches one’s eye at the sight of the group Al-Hashd Al Shaab (people's militia force, formed from the Shiites in Iraq), is their pervasive religious paraphernalia. 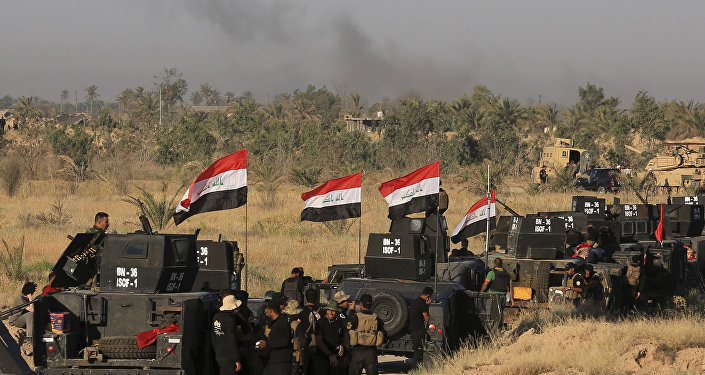 First thing that catches the eye is the numerous flags with the image of Prophet Muhammad's grandson Hussein, the portraits of religious leaders and grand Ayatollahs Ali al-Sistani and Ali Khamenei.

There are labels with the word Karbala (the holy city of the Shiites, a place of pilgrimage), and “Hussein, here I am in front of you” seen on tanks, armored cars and even artillery shells.

Officially, during the last stage of liberation of Fallujah, Shiite militia did not participate because of the noisy campaign which was launched by the Sunni opposition in the media, but the victory over Daesh in this city is credited to them.

“Daesh fights very fanatically and if it wasn’t for Al-Sha'ab Hashd and the religious feelings of Shiites instilled by religious authorities, Daesh most certainly would have possessed all of Iraq by now. But right now their morale is not what it used to be as it has been broken by numerous failures,” one of the leaders of Al-Sha'ab Hashd, Hadi al-Amiri, told RIA correspondent Rafael Daminov.

Al-Sha'ab Hashd was formed in the summer of 2014, when Daesh troops, who were already at that time capturing large areas in the north and west of the country, took full control of the second largest city in Iraq, Mosul.

The continuous defeat of the soldiers of the government army, who simply fled the battlefield, leaving the entire arsenal of American weapons, surprised the political leadership in Baghdad. The fanatics were merciless and executed peaceful citizens.

Baghdad itself was under threat of terrorism with militants located twenty kilometers from the village of Abu Ghraib threatening to fire at the international airport of the capital. Satisfied by their easy victories militants seriously discussed the possibility of capturing sacred to all Shia world cities of Karbala, Samarra and Najaf.

It is in Najaf, which houses the mausoleum of son-in-law of Prophet Muhammad and the fourth Caliph that a call for a general jihad to protect the country from terrorists was made. It was announced by a spiritual leader of the Shiite community of Iraq, Ali al-Sistani.

On the appeal of the spiritual leader tens of thousands of people responded to join in fight against Daesh to protect Iraq from falling.

Significant assistance to the new formation has and continues to be provided by Iran, which has the same ideological reference point and acts as a financial sponsor for the majority of Shiite groups in Iraq.

© AFP 2019 / AHMAD AL-RUBAYE
Iraqi Forces Victorious in Fallujah Due to Unified Effort
Tehran started to provide Baghdad with assistance in the fight against terrorism, after the official request of the Iraqi authorities, after Mosul was captured by Daesh.

The Islamic Republic began to supply weapons to Baghdad and in the fight itself there were dozens, and according to some reports, hundreds of military advisers from Iran.

These military advisers are led by the well-known commander of a special unit of the Iranian Revolutionary Guards' “Quds” Major General, Qasem Soleimani. This man, who in the Shi'ite world is now no less popular than the grand ayatollah, is referred to as the main terrorist in the Muslim world.

Elites of the Persian Gulf countries see Soleimani as a threat. Saudi TV channel “Al Arabiya” or Qatari “Al-Jazeera” talk about “the Iranian chief saboteur” showing his images where he is talking with the soldiers of Hezbollah in Syrian Latakia or leaning over military maps in the suburbs of the Iraqi Fallujah.

The appearance of Iranians in Iraq and military advancement of the Shiite militia, despite its successes in the fight against Daesh, were the main reason for criticism of the government of Haidar al-Abadi on the part of the monarchies of the Gulf, as well as local Sunni opposition.

According to them, Daesh and Al-Sha'ab Hashd are two sides of the same coin. Shiite militias, they claim from the stands of numerous media resources, execute and torture anyone they suspect of having links with jihadists.

© AP Photo / Khalid Mohammed
Iraq Celebrates Monumental Victory Over Daesh in Fallujah (VIDEOS)
Such notoriety was acquired by a former driver for the Iraqi Ministry of Communications, Ayub al-Rabia, better known in the world under the name of Abu Azrael.

His nickname Ayub in Arabic literally translates as “the father of Azrael” (Azrael in Islam mean angel of death).

This man is tall and muscular and since joining the militia a couple of years ago he has grown a long beard, he wears black camouflage, and has huge knives tucked into his belt. If someone sees him they may not be able to tell him apart from a Daesh militant.

However, Abu Azrael resembles the terrorists not only in his appearance. A video where he has hung a captured Daesh militant over fire has received thousands of online hits.

“Will erase all of you to powder,” Abu Azrael appeals to Daesh with a satisfied smile directing his long sword toward the camera.

“He became a symbol of resistance, the most powerful weapon of counter-propaganda. People have seen that Daesh can be vicitms too. That they also cry and beg for mercy.  This was never seen before, no one taught them such a lesson before, ” militiaman Youssef told RIA correspondent Daminov in an interview.

“Al-Sha'ab Hashd is a very large organization, but all of these people are patriots. They responded to a call to defend Iraq and are ready to die for this country. Naturally, among so many people, there are those who have suffered from terrorist actions, explosions in Baghdad and other cities, they are taking revenge. We do not encourage it, it is an exception,” head of management information on militia Muhannad al-Ikabi, said.

Regarding Russia, Al-Sha'ab Hashd has expressed great respect. They value Moscow’s stance on Syrian conflict and Russia’s air force attacks on Daesh positions managed to stop the terrorists from advancing on Damascus.