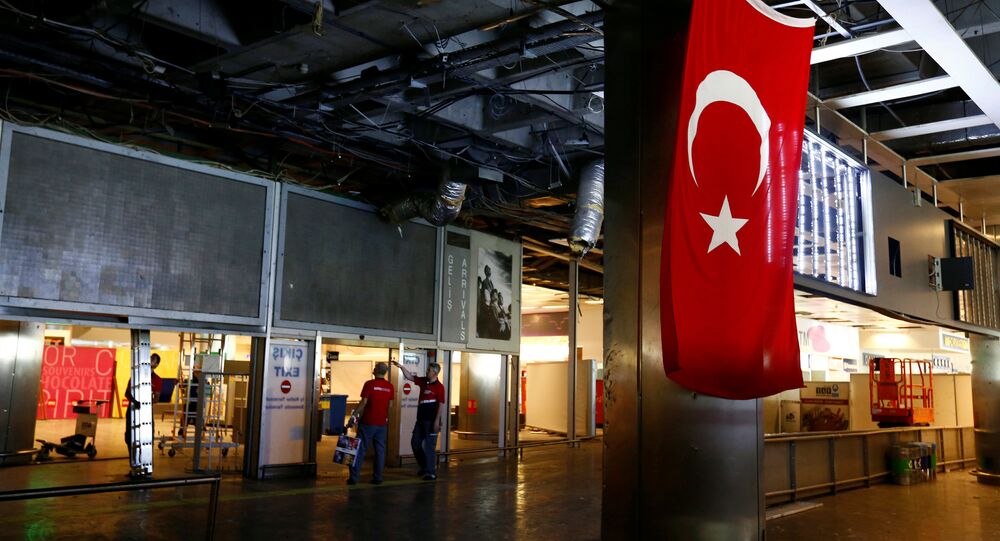 Political scientist and expert on security and counter-terrorism, Metin Gürcan, spoke to Sputnik about the recent terror attack at an Istanbul airport and how Daesh is changing its strategy.

© REUTERS / Osman Orsal
Turkey Believes Daesh Behind Terror Attack at Istanbul Airport
“Since its first actions in Turkey in the town of Suruç, Daesh terrorists always chose a target of opposition from a political and religious point of view. The attack at the Ataturk Airport was for the first time aimed at casual passers-by, ordinary citizens,” Gurcan said.

However, the expert noted that the date of the attack must be kept in mind. The day when a bomb exploded at the Istanbul airport was the second anniversary since the creation of the Daesh caliphate which was on June 28, 2014.

It is also important to understand how Daesh planned this attack and who it used to execute it. “If the rebels were sent from Raqqa that is one scenario, but if the local cell was in Turkey that is quite a different matter. The second option is much more dangerous, because, according to available information, in Turkey there are about 30 terrorist structures,” Gurcan said.

Terrorist attack at the airport may be a harbinger of new series of jihadist terrorist acts, not only in Turkey but in other countries as well, because, “Daesh considers Turkey, figuratively speaking, its surrogate mother.”

According to the expert it is from the territory of Turkey that many members of the organization got their training; hence the wave of terrorism will spread further from there. Daesh needs a center, where they can gain strength to plan and prepare new attacks.

Anti-Daesh Fight in Syria’s Manbij Likely to Raise Tensions With Turkey
Talking about why Daesh attacked Istanbul right now, in particular, the expert said that it is possible that the abrupt changes in Ankara’s policy toward Syria and the process of normalization of relations with Russia may have triggered the attacks.

“The terrorist attack at the airport carries two main messages, one directed at the Turkish leadership, the other at the coalition. To Ankara, Daesh is saying, “If you put us in a difficult situation, the high price to pay for that will not take very long,” Gurcan said.

To the coalition forces, Daesh wants to make it clear that, in spite of weakening its position in Iraq and Syria, it is still strong, the expert added.

Considering that jihadists are increasingly getting weaker in Syria and Iraq, Daesh will strengthen its financial and logistical support to its members in the countries where it enjoys relative freedom of action. Turkey, unfortunately, is such a country.

The expert mentioned that Turkey must reconsider its priorities and realize the danger that Daesh poses to the country.

“So far, the Turkish society is polarized under the influence of the foreign policy strategy of the Turkish authorities and its tough anti-Kurdish rhetoric. For example, if you ask 100 people on the street whether the Syrian Manbij should be controlled by Daesh or units of the Syrian Kurdish Democratic Union Party, 50 people will say Daesh and 50 will say Kurds. That is a clear example of polarization in Turkish society,” Gurcan said.

The number of people killed in the triple suicide bombings in Istanbul rose to 43, including 19 foreigners, Turkish Interior Minister Efkan Ala said Thursday, adding that one of the bombers has been identified.

Daesh Builds Fortifications Meters Away From Border as Turkey Does Nothing