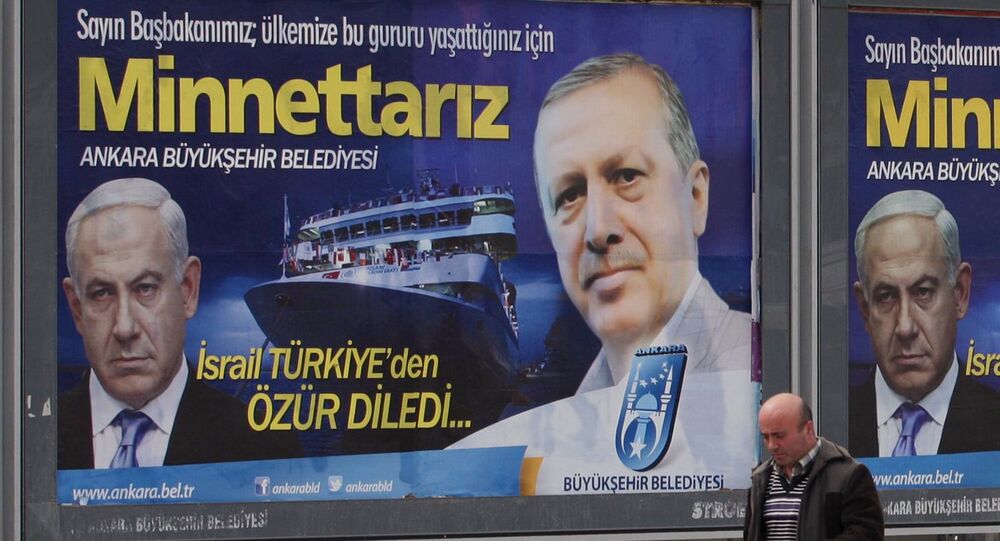 Turkey and Israel have reached an agreement on the normalization of relations. Sputnik spoke to Turkish journalists and politicians about the implications of the apparent political rapprochement.

© AP Photo / Ariel Schalit, File
Israel Sees ‘Immense’ Economic Gains by Making Friends With Turkey
Over the weekend, following the announcement by Turkish and Israeli officials that the two countries had reached an agreement on the normalization of relations after six years of mutual estrangement, Israel also made clear that the sea blockade of Gaza would not be lifted; however, Turkey will be able to send supplies to the Palestinian territory through the Israeli port of Ashdod. In turn, Turkish Prime Minister Binali Yildirim stressed that the agreement would allow Turkey to deliver humanitarian aid to Palestinians living in the Gaza Strip.

Relations deteriorated following the 2010 Freedom Flotilla incident, when a convoy of six ships, including one sailing under a Turkish flag, tried to approach the Gaza Stripp with humanitarian aid and activists on board. The flotilla was blocked and stormed by Israeil forces, resulting in the deaths of ten Turkish citizens.

Commenting on the apparent normalization of ties, Karel Valansi, a regular political commentator for Israeli newspapers Haaretz and Shalom, pointed out that Israel has not made any fundamental policy shift to accommodate Ankara on the Gaza issue. The port of Ashdod had been open for humanitarian assistance before, with ground-based delivery of aid carried out through the border point at Kerem Shalom. "From this perspective, the agreement has not resulted in anything new. Was the Gaza blockade lifted? No. A naval blockade continues," the journalist said.

"There is information suggesting that a second border post may be opened near Kerem Shalom, facilitating the passage of goods across the border," she added. The purpose of that project, if it materializes, may be "to push Turkey to the forefront of construction work on the Gaza strip."

© Sputnik / Sergey Guneev
Netanyahu Thanks Biden for Support During Israel-Turkey Talks
"Previously, Turkey had built hospitals and mosques there. Now, the Turkish government intends to expand its activity."

Israel too has been forced to make concessions, Valansi noted, specifically with regard to Ankara's refusal to close the Turkey-based offices belonging to Hamas. The journalist suggested that Israel may have "decided not to insist on this condition's implementation on purpose," because "it wants to use Turkey as a mediator between itself and Hamas." Still, given the Israeli government's characterization of Hamas as a terrorist organization, and the presence of several prominent Hamas leaders in Turkey, "from this perspective the agreement clearly has serious flaws."

At the same time, given existing geopolitical realities, the commentator suggested that Ankara faced a "much greater need for the restoration of relations than Israel. The time when Israel was presented as the common enemy, the fight against it uniting the entire Muslim and Arab world, has passed. Ultimately, Israel proved more successful than Turkey in the conduct of the policy of 'zero problems with neighbors' [a policy concept outlined by in 2010 by now ex-Prime Minister Ahmet Davutoglu]. The serious foreign policy mistakes made by Ankara during the events of the Arab Spring and the Syrian crisis led to a deterioration of relations with neighboring countries, and Turkey's isolation in the region. Therefore, Turkey truly very much needed to conclude this agreement [with Israel]," Valansi concluded.

For their part, lawmakers from Turkey's Republican People's Party, the Main Opposition in the country's National Assembly, slammed the Turkish government's move, telling Sputnik that the Turkish-Israeli agreement effectively amounts to formal recognition of the legitimacy of the blockade of Gaza.

© AFP 2021 / AHIKAM SERI
Israel Planning Gas Deliveries to Europe Through Turkey
Utku Cakirozer, a member of the parliamentary planning and budget commission, noted that "judging by the text of the agreement, the blockade of Gaza imposed by Israel is not going to be removed. The Israeli prime minister has said so openly…Given this situation, every Turkish citizen should ask themselves the question: if the blockade is not going to be removed, if we are agreeing to send humanitarian aid to Palestine through the Israeli port of Ashdod, why did we allow defenseless people into the Mediterranean 6 years ago? Why did we give permission for this action? Why did we not provide them with at least basic protection? Who today among the authorities will take responsibility and explain to the Turkish people why it was that ten innocent people were killed in that incident?"

Ultimately, the politician emphasized that "for six years, Turks were promised that the blockade of Gaza would be lifted, and that until that time Turkey would maintain its position. After Israel apologized and agreed to pay compensation, the relationship did not improve, since the condition of lifting the blockade was not implemented."

Now, given the move toward rapprochement despite the blockade remaining in place, Cakirozer lamented that the restoration of relations effectively serves as a "formal recognition of the blockade, its legitimacy, on the part of Turkish authorities."

Mevlut Dudu, a member of the parliamentary commission on foreign relations, echoed Cakirozer's criticism, adding that the deterioration in Turkish-Israeli relations occurred before the 2010 Gaza flotilla raid, at Davos in 2009, where in a criticism of Israeli leader Shimon Peres, Erdogan demonstratively left the conference hall. Ankara's antagonism, Dudu suggested, has only resulted in geopolitical and economic losses for Turkey.

© AP Photo / Lefteris Pitarakis
Black Sea Buddies: Turkey Looks to Cosy Up to Coastal Neighbors
Ultimately, the MP noted, "we are in favor of a normalization of relations with Israel, but there is a very important caveat in this regard: Turkey must put forward a series of conditions for normalization, the most important of which must be the lifting of the blockade against Gaza." However, the government has so far failed to do so.

"With this in mind, I believe that the agreement, which does not provide for the removal of the Gaza blockade, does not serve to benefit Turkey or the Middle East as a whole," Dudu concluded.

Israeli PM`s Visit to Turkey Not Under Discussion Yet