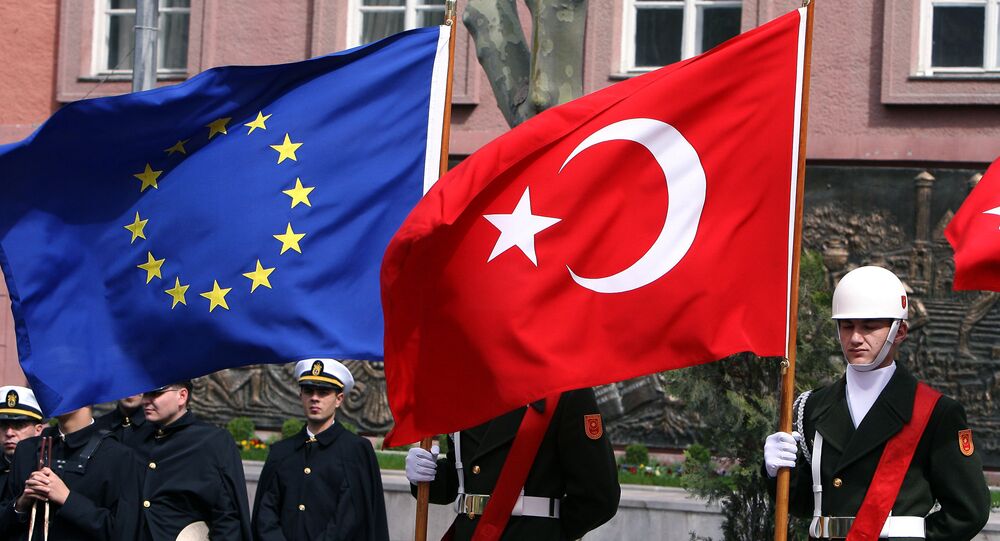 In recent months, President Erdogan's rhetoric toward the EU, and the negotiations process on the country's entry into the organization, has sharpened significantly. Speaking to Sputnik, politician, writer and analyst Suat Kiniklioglu suggested that the government is preparing society to reject the idea membership in the supranational union.

© AFP 2021 / ADEM ALTAN
Erdogan Tells Putin He's 'Sorry' Over Death of Russian Su-24 Pilot
Last week, President Erdogan claimed that the European Union doesn't want Turkey to join the bloc because it's a "Muslim-majority country," adding that he is now considering a referendum on whether to continue the country's efforts to join the bloc.

"We can stand up and ask the people just like the British are doing," the president said, speaking on the eve of the Brexit referendum in the UK. "We would ask: 'Do we continue the negotiations with the EU or do we end it?' If the people say 'continue', then we would carry on."

Asked to comment on Erdogan's sharpening rhetoric, Suat Kiniklioglu, the director of the Ankara-based Center for Strategic Communication, told Sputnik Turkey that the Turkish leader is "preparing the public for the abandonment of the idea of joining the EU."

"Once it became clear that the issue of abolishing [Shengen area] visas was not going the way the ruling party wanted, the image of a 'lonely leader' – of Erdogan leading a fight against the West, began to form among the population," Kiniklioglu said.

© Sputnik / Vladimir Vyatkin
Summertime Sadness: Turkey's Tourism Crisis Shows No Sign of Abating
"Over the past three years, beginning with the protest movement in Gezi Park, the EU has constantly monitored and expressed criticism of Turkish policy on issues such as democratization, freedom of speech, freedom of assembly, censorship and pressure on the media," the analyst added. "The situation for the Turkish president became even more complicated after the question of the interpretation of the concept of terrorism found itself on the agenda."

In light of the downturn in relations between Ankara and Brussels, Kiniklioglu suggested that "the recent statements by Erdogan in relation to the EU are an attempt to prepare the electorate for a possible slowdown in the negotiations process, and the [further] cooling of relations between Turkey and the EU."

At the same time, this process may have something to do with the government's ideology, the analyst said. "For three years, Erdogan has created the image of himself in the public consciousness as the leader of the Islamic world, leading the fight against an 'insidious and hypocritical' West. Turkish authorities had pinned great hopes on the liberalization of the visa regime, but the process has stalled, without really having time to begin."

Moreover, the analyst recalled that the debate on negotiations for entry hadn't led to consensus. "The country's economy faces serious negative trends, and it is becoming increasingly clear that this autumn and winter will be very difficult in this sense. All this will require the strengthening of the Turkish leadership's image in the eyes of their voters," with President Erdogan portrayed as fighting "alone against the West."

© Sputnik / Collage
EU Fragmentation Starts With UK First to Leave Bloc – Turkish Deputy PM
Commenting on the results of the Brexit referendum, where a majority of voters voted to leave the 28-member bloc, Kiniklioglu emphasized that he believes that "Europe will be entering an extremely unstable political and economic period." As for the country's prospects in the midst of this crisis, the analyst suggested that it's difficult to predict how events will unfold, "given that there are currently no negotiations except on issues of trade and the problem of refugees."

Turkey formally applied for membership in 1987, and began accession talks in 2005, but negotiations have been extremely slow, slowing further in recent years. In the run-up to the Brexit referendum, British Prime Minister David Cameron said that Turkey's membership to the EU was "not remotely on the cards," adding that Ankara may not be ready to join the bloc "until the year 3000" if current trends continue.

Erdogan Plans to Hold Referendum in Turkey on EU Membership