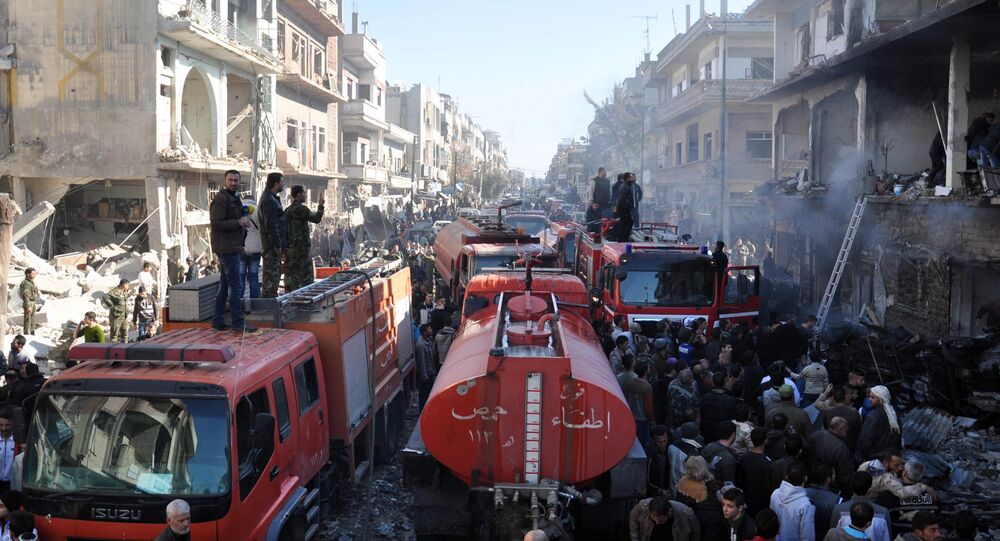 Earlier this month, a group of State Department officials leaked a memo of dissent calling for the use of US military power to help end the bloody conflict in Syria. Offering a commentary, the French online investigative and opinion journal Mediapart suggested that the memo's authors don't actually care about the fate of ordinary Syrians.

The memo, signed by 51 diplomats, slammed Russian and ostensible Iranian military support for the Syrian government, and called for a "more muscular military posture under US leadership" willing and able to impose "consequences" on the Assad government for alleged ceasefire violations. Last week, Secretary of State John Kerry met with 10 of the memo's authors for a "collegial discussion," according to State Department press secretary John Kirby.

© AFP 2020 / BRENDAN SMIALOWSKI
Kerry Discusses Military Option in Syria With State Department 'Dissenters' - Spokesman
Clearly aware that this 'more muscular military posture' could lead to disastrous consequences, given the Russian forces operating on Syrian territory on the side of the Syrian government, the memo's authors craftily suggested that "we are not advocating for a slippery slope that ends in a military confrontation with Russia. Rather, we are calling for a credible threat of targeted US military responses," all supposedly in the interest of 'enforcing the truce'.

Earlier this month, Secretary of State John Kerry warned Damascus and Moscow that Washington's "patience was not infinite" with alleged ceasefire violations in Syria, supposedly over Syrian government forces' attacks on Islamist groups like Ahrar al-Sham, believed to be allied with the al-Nusra Front, the Syrian affiliate of the al-Qaeda terrorist network.

Also this month, Russian Foreign Minister Sergei Lavrov told Russian media that Washington had explicitly asked the Kremlin not to target al-Nusra Front, supposedly because there were also 'moderate' militant groups in the territories held by the terrorists. It is noteworthy that Nusra, like Daesh (ISIL) is not a member to the truce signed in February.

Commenting on the story, the French news and opinion journal Mediapart suggested that while the stated goal of the memo and its call for US air strikes against the Syrian government is "to end a five-year war that has killed over a quarter million people and forced more than half the country's population to flee," the real motive is different, and infinitely more ominous.

© Sputnik / Valeriy Melnikov
Assad, Syrian Army 'The Last Line of Defense Between Daesh and Damascus'
At his meeting with the memo's authors last week, Mr. Kerry indicated that the White House already had a policy, and that until further notice, President Obama's course remains to refuse a direct US military intervention in Syria.

But the reason for the internal dissent, according to Mediapart, stems from the fact that the Kerry State Department's own policy on Syria has resulted in a blow to US prestige.

"In 2013," the journal recalled, Kerry "was one of the most bellicose supporters of direct intervention by the US military to overthrow the government of Bashar al-Assad, after the Obama administration announced its 'red line' over the use of chemical weapons. At that clime he claimed (and this was later disproven) that Syrian government forces had been responsible for a chemical attack in the suburbs of Damascus."

Since then, Mediapart added, the Obama administration went from balking "at direct military intervention in the face of popular opposition to a new war in the Middle East and due to divisions among the leaders" in the army, the State Department and the CIA, to airstrikes (beginning in 2014) and the sending of several hundred special forces into Syria "under the pretext of fighting the Islamic State."

Unfortunately for Washington, "these operations did not yield any results, allowing ISIL to invade Iraq and Syria."

Ultimately, the journal noted, "only the Russian military intervention in Syria, with the support of [Syrian] government forces, would end up dealing a serious blow to ISIL and the Nusra Front, the Syrian branch of al-Qaeda which Washington continues to protect. In doing so, Vladimir Putin showed that he alone could seriously counter the Islamist militias. [Russia's] prestige in much of the Middle East was increased at the expense of that of the United States."

© REUTERS / Rodi Said
Why US Diplomats Urge Obama to Fight Assad Instead of Daesh in Syria
And this, Mediapart suggested, was the real reason behind the memo and its calls for a 'more assertive military role' for the US in Syria. "Damascus," it added, "would be the first target" of Washington's "judicious use" of air and missile strikes.

Calling out the memo's 'humanitarian' call to "take steps to end death and suffering in Syria," Mediapart recalled that this hypocritical suggestion was made "as if the bulk of the war in Syria was not caused by Washington" in the first place.

"In fact," the journal noted, "the authors of the memo are not at all concerned about the fate of the Syrians. They implicitly seek to arrange an intervention that will lead to a military confrontation with Russia. This will become inevitable if US intervention leads to the series of 'secondary effects' hypocritically outlined by the memo."

"Among them would be the inevitable deaths of Russian and Iranian soldiers deployed with Syrian government forces, the probability of the destruction of Russian military aircraft and an escalation of mutual hostilities. After that, as Putin recently warned, a Russian response may follow, which could cause an uncontrollable escalation."

© AFP 2020 / Andrew Caballero-Reynolds
What Would a Hillary Clinton Presidency Mean for War-Torn Syria?
Ultimately, Mediapart warned, the Syrian crisis is unfolding in the context of escalating tensions between Washington and Moscow, already "at their highest since the Cold War. The ongoing NATO military exercises on Russia's western border, and the deployment of anti-missile systems in Eastern Europe, designed to prepare for a 'winnable' nuclear war against Moscow, signal the growing danger of confrontation between the two major nuclear powers of the world."

So far, President Obama has rejected the proposals in the dissenting State Department memo. "He does not feel able to arrange a new intervention so close to the November elections."

However, the journal warned that in the upcoming election, supporters of war will bank on "ultra-militarist" Hillary Clinton to win the White House. As for Donald Trump, "there is no guarantee that he [too] could resist anti-Russian pressure, even if he has so far advocated a resumption of cooperation with Moscow. A false flag 'incident' provoked by the CIA which results in the death of US special services agents could force Trump to engage militarily on a large scale against Russia. A nuclear war could result," Mediapart grimly concludes.

What Would a Hillary Clinton Presidency Mean for War-Torn Syria?