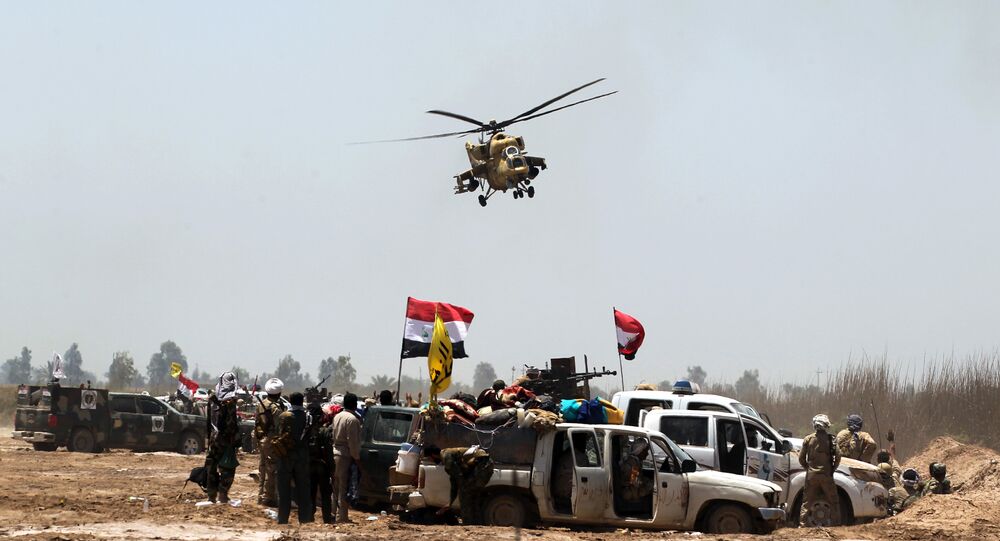 Hadi Amiri, the head of the Badr Organization in the Popular Mobilization Forces, said that the main reason for quick victory of Iraqi forces in Fallujah is the unity.

© AP Photo / Maya Alleruzzo
Iraqi Prime Minister Raises National Flag in Liberated Fallujah - Reports
MOSCOW (Sputnik) — Iraqi forces have been able to liberate the city of Fallujah from Islamic State (ISIL or Daesh) militants due to a unified effort by all groups taking part in the operation, Hadi Amiri, the head of the Badr Organization in the Popular Mobilization Forces, said Sunday.

"The lessons to be learned from this battle show that a quick and important victory is possible thanks to our unity. If we want to determine the outcome of the battle for the liberation of Iraq this year, avoiding large losses and winning quickly, we must fight while supporting each other," Amiri said in a statement.

© AP Photo / Khalid Mohammed
Iraq Celebrates Monumental Victory Over Daesh in Fallujah (VIDEOS)
The Shiite commander congratulated the Iraqi people and the families of those killed during the operation, also pledging to liberate Mosul and stressing that government forces, local and Shiite militias, as well as the Kurdish Peshmerga, took part in the liberation.

Fallujah, located some 42 miles west of the Iraqi capital Baghdad, is one of the largest cities in the Anbar province. The Daesh, outlawed in many countries including Russia, has been in control of the city since 2014.

Last week, Iraqi Prime Minister Haider Abadi declared Fallujah liberated from the Daesh, as the government forces gained control of the city center. However, media reported that fighting continued in the city.