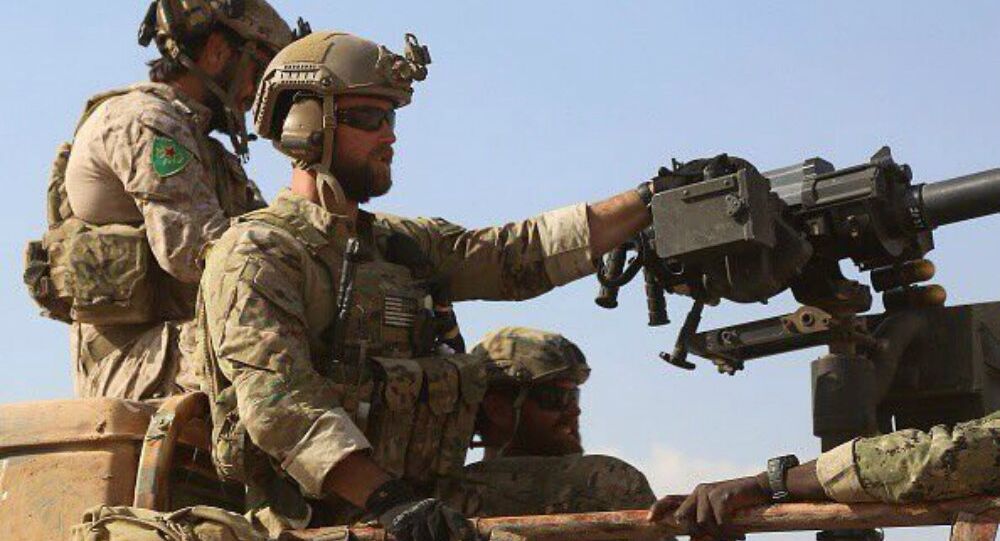 Michele Flournoy, the US civil official predicted by many to head the Pentagon if Democratic frontrunner Hillary Clinton wins the US presidency in November, said she would alter American strategy to battle Daesh by assisting armed militias, called by Washington “moderate rebels,” to crush the legitimate Syrian president Bashar al-Assad.

© AFP 2021 / LOUAI BESHARA
How 'Neocon-Hopeful' Hillary Clinton Planned to Topple Assad
Speaking at a Center for New American Security (CNAS) think tank conference on Monday, Flournoy, a senior fellow of the organization, urged the US military to put boots on the ground in Syria to assist in  toppling the al-Assad government, recently successful in reclaiming large areas of the country from Daesh.

To accelerate the defeat of the legitimate Syrian government, Flournoy introduced the notion of a “no bombing” zone for the moderate rebels. These so-called moderates are widely accepted as being, in reality, the US-backed armed militias that have been tearing the country apart since the beginning of the civil war in 2011.

To justify her hawkish proposals, Flournoy took the traditional path, resorting to the Russian factor. She claimed that Moscow’s engagement since September 2015 in the war, at the invitation of the Syrian government, does not “support the kind of negotiated conditions we would like to get to.”

© REUTERS / Rodi Said
US State Department Neocons Beating War Drums Over Syria, Memo Reveals
The "conditions" she was talking about remain unclear, especially in light of positive results brought about by the contribution of international militaries, including Russia, in stripping Daesh in recent months of 45 percent of the Iraqi territories and 20 percent of the Syrian lands it seized in 2014. Currently, the liberation of the crucial cities of Raqqah and Mosul from Daesh is being prepared, and is expected to inflict extensive damage on the extremists, according to Iraqi Foreign Ministry spokesman Ahmad Jamal.

The Pentagon, however, appears to have other plans in mind for Syria and Iraq. According to a CNAS report, prepared in cooperation with an “ISIS Study Group” co-chaired by Flournoy, Washington must “go beyond the current Cessation of Hostilities.” By that, the paper means a so-called no-bomb-zone, which suggests US retaliation against the Assad government, if Damascus continues to resist the American-backed militants. Proposed retaliation measures include airstrikes on “security apparatus facilities in Damascus.”

.@TimPawlenty: Not too late to establish a no-fly zone in Syria and to tell Assad he's on the clock. #CNAS2016

“If you bomb the folks we support, we will retaliate using standoff means to destroy [Russian] proxy forces, or, in this case, Syrian assets,” Flournoy told Defense One.

​At the same time, the report sensibly cautioned against hitting Russian airbases in Syria.

© Flickr / coolloud
Ex-US Diplomat: Al-Nusra Front Key Element in US Plots to Topple Assad
Flournoy, who served as undersecretary of defense for policy during Obama’s first term in office, has consistently criticized the current US-anti Daesh policy, claiming that using an “under-resourced” military to battle extremists in the Middle East, and offering “underdeveloped” political solutions for the crisis has been ineffective, at best.

Earlier, she called for increasing the number of combat missions against Daesh, sending more advisors to train Iraqi soldiers and allocating more weapons to Sunni tribes and the Kurds in Iraq. She also called for maintaining the infamously inadequate train-and-equip program that graduated just five moderate rebels, and cost US taxpayers over $500 million.

According to Washington Post columnist David Ignatius, Flournoy is now on the “short, short” list for the job of US Secretary of Defense.