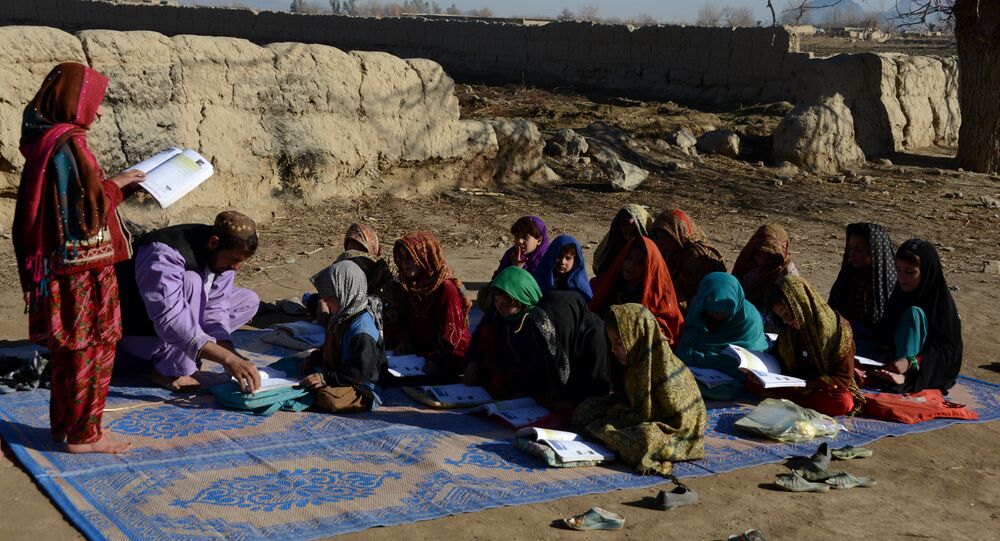 As part of its international humanitarian effort, Denmark has been generously donating to the Afghan school system. However, concerns about misplaced help have been growing amid revelations that some of the schools eligible for Danish help actually were under the Taliban's control.

© AFP 2021 / GERARD JULIEN
Who's Afraid of Salman Rushdie? Denmark Cancels Stage Adaptation of Notorious Novel
Denmark's 12-year struggle against the Taliban fundamentalist movement in Afghanistan ended two years ago, but Denmark still sends a lot of support in the form of economic aid to the war-torn country. In total, Denmark has contributed one billion kroner (150 million dollars) to the Afghan school system, but a shocking documentary by Danish Radio revealed that a number of schools in fact were fully or partially controlled by the Taliban terrorists, whereas other schools had far fewer students than claimed. Danish politicians have called it a scandal.

One of the 270 schools that received Danish support and was featured in the documentary is Qarghan Thipa, where teaching is fully dictated by the Taliban. Despite the fact that the school is located in a government-controlled area, the agenda is largely set by the terrorist organization, which among other things opposes female education. The UN estimates that the Taliban control or have significant influence in half of Afghanistan.

"Those people simply give us the curriculum in accordance to their principles," headmaster Noor Mohammed told Danish Radio.

© Flickr / lukestehr
Out! Copenhagen Evicts Notorious Islamist Organization
Special Inspector General for Afghanistan Reconstruction John Sopko confirmed the shocking information to Danish Radio. He explained that schools receive money from the West according to the number of students and thus are provided with an incentive to cheat.

Foreign Minister Kristan Jensen, who is ultimately responsible for Danish assistance to Afghanistan, wrote in an email to Danish Radio, that he was well aware of the problem with the so-called "ghost students."

"We take this problem very seriously, and we will take action if we suspect corruption or misuse of Danish funds," he wrote.

© Sputnik / V. Kiselev
Under No Illusion: Norway, Denmark See Brutal Afghan Truth
Earlier, Conservative foreign affairs spokesman Naser Khader used now disputed facts that up to 10 million children have been granted school education in Afghanistan and this supposedly justified the war in Afghanistan. Now, he has demanded a thorough investigation, as the revelations make it worth reconsidering Danish support to Afghanistan.

"On the one hand, I think it is enormously important that we in Denmark assist and ensure that [Afghan] children go to school, particularly girls. But on the other hand, we cannot accept being cheated of our own money and the Taliban dictate the curriculum," Naser Khader told Danish Radio.