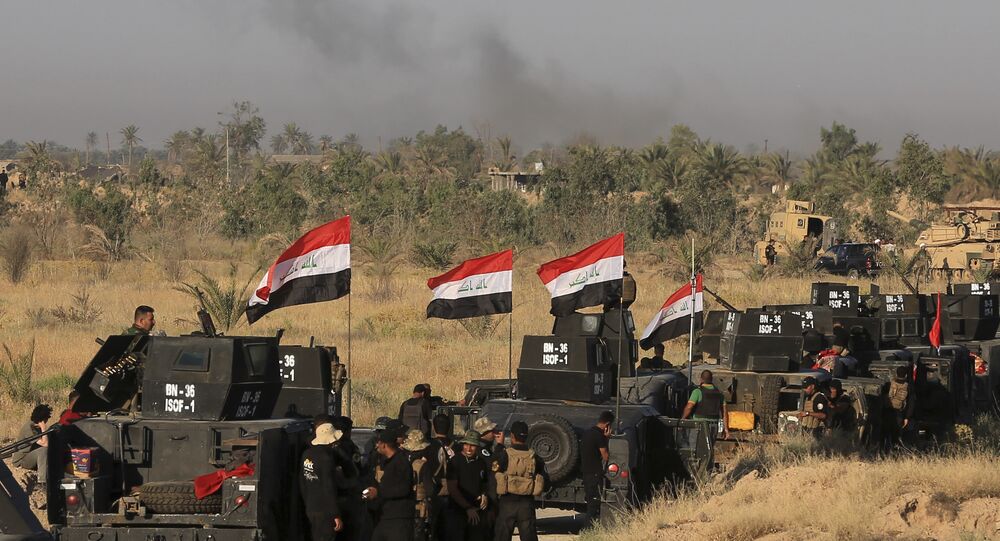 Tens of thousands of people have fled the Daesh stronghold of Fallujah, Iraq since the beginning of a siege by government forces and loyal militias. Now, a humanitarian disaster threatens the overcrowded refugee camps around the city.

© AP Photo / File
Fallujah Under Daesh: People Forced to Eat Grass, Donate Blood
The situation in and around Fallujah, situated only some 50 kilometers west of the Iraqi capital city of Baghdad is appalling. Residents are being forced to eat unsuitable food and animal fodder and drink raw river water to survive. Those attempting to escape run the risk of being maimed or shot dead by Daesh snipers, the Norwegian Refugee Council's mission in Iraq reported.

"Our food supply is sufficient for two days only, and the situation is acute," Karl Schembri of the NRC in Iraq told the Swedish newspaper Aftonbladet. "We will soon run out of both water and food. Also, we have an extreme shortage of medicine," Schembri said.

Even the World Health Organization warned in a written statement that the situation in the region is "deeply disturbing" and that thousands of families are in dire need of health care intervention.

© Sputnik / Ari Jalal
Gone Berserk: Norwegians Fight Daesh Alongside Peshmerga
In recent weeks, more than 42,000 people have risked their lives fleeing Fallujah to escape the fighting and starvation. However, the city center remains closed, which is where Daesh is keeping the remaining population as a human shield, according to the NRC.

"They are many people left, and they are the most vulnerable, who have not managed to escape. The elderly, children and pregnant women cannot get out. And they are in great need of help," Schembri said.

The NRC is calling on the international community to act promptly to prevent the escalation of the fighting, which would further aggravate the situation in the camps, where the water shortage in the 50-degree heat is already acute.

"We fear that those who manage to escape the humanitarian catastrophe in Fallujah now end up in another pending disaster," Schembri said.

© AP Photo / Andrew Harnik
Trump Says US Iraq War Soldiers Stole $50 Million – He’s Probably Right
Fallujah and Mosul remain the two last major Iraqi cities still controlled by Daesh. In late May, Iraqi forces launched another major offensive to retake the city of Fallujah. Many Iraqis call Fallujah "the snake's head," because it is there that the Daesh advance started.

The operation to reclaim the city includes counterterrorism services, Iraqi government forces and allied militias. The offensive has also received air support from the US-led alliance.