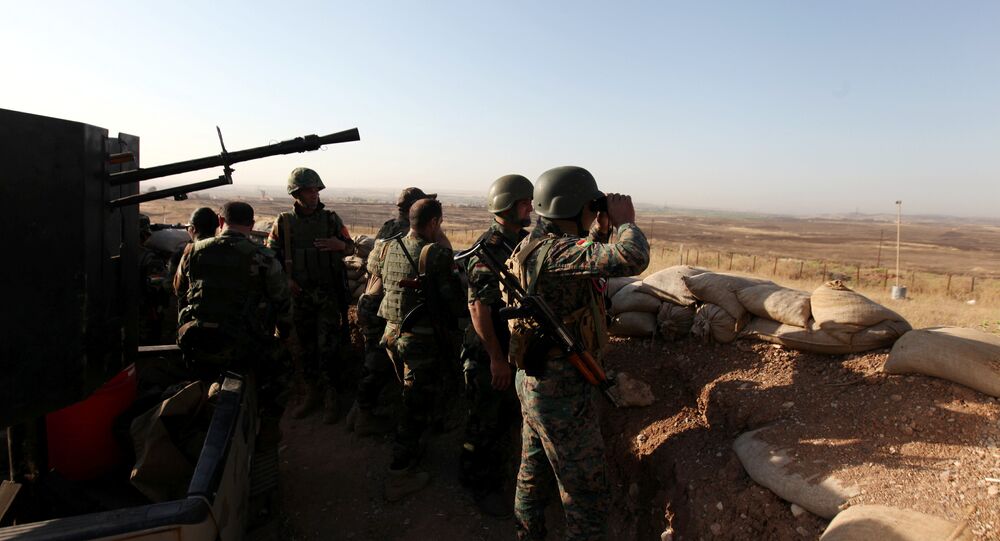 President of the United States, Barack Obama has set a goal to liberate Raqqa and Mosul from Daesh before his presidential term expires in November. President Obama wants to go down in history as the destroyer of Daesh, a Kurdish political analyst said.

"Operation Raqqa looks like Washington’s effort to regain ground after the liberation of Palmyra by the Syrian Army backed by Russian airstrikes. Before Obama leaves office he wants to be the liberator of Raqqa and Mosul," prominent Kurdish analyst Ramazan Karim told RIA Novosti.

© AP Photo / Raqqa Media Center of the Islamic State group, File
Relief for Civilians Trapped in Raqqa Requires US-Russian Cooperation
The Syrian Democratic Forces (SDF) started an operation to liberate Raqqa in May. The SDF mainly comprises the Kurdish People’s Protection Units (YPG). They are backed by aircraft of a US-led international coalition. Moreover, American, German and French military instructors and special forces are working in the region.

Currently, the first stage of the operation is underway. The goal is cut off Raqqa from the Turkish border. Now, Kurdish forces are storming the town of Manbij. At the same time, the Syrian Army is advancing from the south on the province of Raqqa.

© AFP 2021 / MARWAN IBRAHIM
Life After Raqqa: Regions Where Daesh May Move to If Defeated in Syria
Washington announced an operation to liberate Mosul, Iraq’s second-largest city, in early-March. According to some military analysts, before the liberation of Mosul, Iraqi forces would liberate Fallujah. Then, the army and Kurdish troops would deploy to Mosul.

"They cannot liberate Mosul so far. There are tensions between Baghdad and Kurds as well as in the Iraqi government. There is the issue of dividing Mosul after the liberation. Mosul is a stumbling block between Kurds, Sunni, and Shiites, but also between Iran, Turkey and the US and other Western countries," the analyst said.

According to him, the main question is not the liberation of Mosul but who will reap the fruits of this victory.

"I think that the liberation of Mosul would be postponed. The situation in Raqqa is not that complicated so its liberation would be successful," Karim suggested.

Russia, the US, Kurds

According to the analyst, in order to liberate Raqqa, the US was ready for a compromise and formed a tactical alliance with the Democratic Union Party (PYD), the largest and most powerful Kurdish group.

"Previously, relations between Washington and PYD were not close. But amid rapprochement between PYD and Moscow, Washington was concerned. The US promised to open a PYD office in Washington. Then, a Pentagon representative visited Kobani and the US and PYD agreed on an operation in Raqqa," Karim said.

© Flickr / The U.S. Army
US Ground Troops Participate in Operations Against Daesh in Iraqi Mosul
According to the analyst, previously the US planned the fight against Daesh as long-term but had to adjust the plan after Russia became involved.
"Kurdish forces are very capable, and the US leads an aerial coalition. I think the liberation of Raqqa will be successful," he said.

At the same time, he stressed that it is impossible to "completely defeat" terrorism in Syria without Russia.

"Iraqi and Syrian Kurds have underscored that cooperation between Russia and the US would make the fight against Daesh more efficient. Russia’s actions against are more effective than what the US is doing. If you take a look at a Daesh map you will see that after Russia involved the territory began to shrink and its numbers began to decrease," Karim concluded.