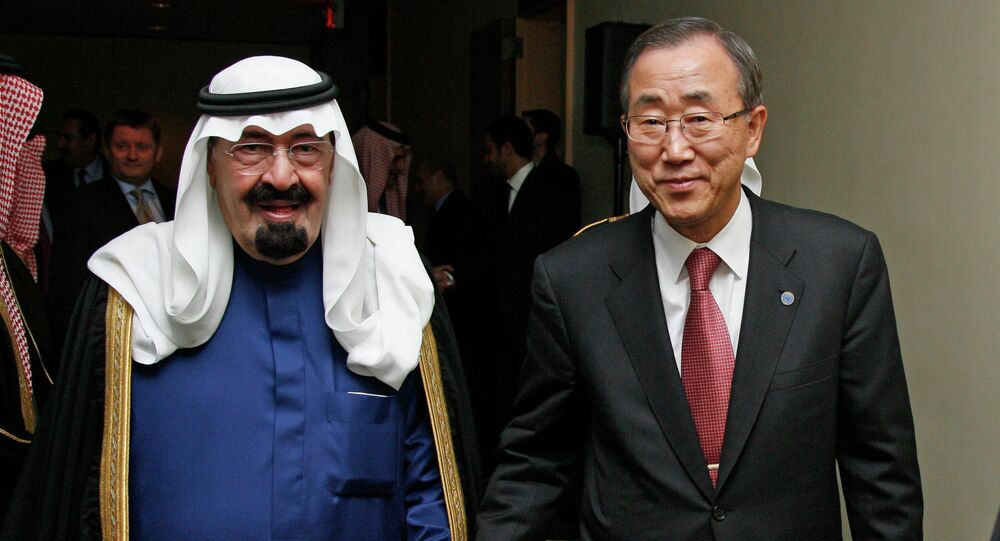 Secretary General Ban ki-Moon went public with Saudi threats to divest from the United Nations and force other Arab states out of the international body if Saudi-led forces remained on the UN’s ‘child-killer’ list.

On Thursday, UN Secretary General Ban Ki-moon publicly commented that he removed the Saudi-led coalition in Yemen from a child-killer blacklist only 72 hours after it was published, due to a financial threat to defund United Nations programs, sparking widespread outrage and global condemnation.

The UN’s annual "Children and Armed Conflict" (CAAC) report initially listed the Saudi-led coalition under “parties that kill or maim children” and “parties that engage in attacks on schools and/or hospitals,” after UN researchers in Yemen attributed 60% of the 785 child deaths and 1,168 child injuries to bombing attacks by Riyadh forces using US weaponry.

The Saudi government immediately attacked the report, claiming that the UN observer statistics were "grossly exaggerated" and boasting about the accuracy of high-tech US weaponry that they claimed reduced the number of non-combatant deaths.

Saudi Arabia also questioned whether its inclusion on the United Nation’s CAAC report undermined the UN mission to prop up Yemen’s government, which the UN Security Council, particularly the US and UK, have supported through the passage of several resolutions.

On Monday, the UN Secretary General aimed to contain controversy surrounding the removal of Saudi-Arabia from the list, despite strong evidence linking Riyadh to catastrophic bombing attacks on schools and hospitals in Yemen, by asserting that the move was temporary while UN and Saudi officials jointly review the evidence, arguing that the accuracy of UN charges was paramount.

But on Thursday, Ban Ki-moon annulled his previous statement, explaining that the collateral terror wrought upon Yemenis by the Saudi monarchy under the guise of fighting the Houthi political opposition faction was unconscionable.

"The report describes horrors no child should have to face," Ban Ki-moon said at a news conference. "But at the same time, I also had to consider the very real prospect that millions of other children would suffer grievously if, as was suggested to me, countries would defund UN programs. Children already at risk in Palestine, South Sudan, Syria, Yemen, and so many other places would fall further into despair."

Saudi Arabia remains one of the UN’s largest Middle East donors, providing nearly a billion dollars annually to UN food programs in Syria and Iraq. In 2014, the kingdom gave $500 million – the largest single donation to the United Nations – to aid Iraqis displaced by Daesh. Additionally, Riyadh has provided tens of millions of dollars to assist Palestinian refugees and rebuild Gaza.

On Monday, senior Saudi diplomats, including Saudi Foreign Minister Adel al Jubeir, informed UN officials that Riyadh would immediately pull several hundred million dollars from aid programs and use its regional influence to convince other Arab governments and the Organization of Islamic Cooperation to sever ties with the United Nations if the monarchy was not immediately removed from the list.

The use of extortion to prevent the public recognition of human rights atrocities appears to be a running theme of late for the Saudi foreign minister who, in April, threatened to divest the country’s $750-billion holding in US Treasury bonds if the United States passed legislation allowing the family members of 9/11 victims to sue Riyadh.

Democratic presidential challenger Bernie Sanders blasted Riyadh’s threat, which, if undertaken, was predicted to possibly trigger an immediate US currency crisis, sending American equity markets into freefall, saying the United States "cannot be blackmailed." However, the Obama administration fiercely lobbied Congress to kill the legislation and assured Saudi Arabia that there was no possibility that it would become law.